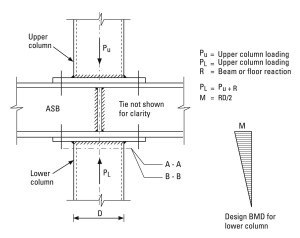 This is the fourth in a series of ADs dealing with discontinuous columns in simple construction. AD 281, AD 283 and AD 285 were the first three in the series and this AD deals with the design of the beam-column connection.

Figure 1 illustrates a typical beam-column connection, where the column end plates, often called cap and base plates, are bolted directly to the flanges of the floor beam. Full depth stiffeners are also provided on the beam at the connection location.

The rolled pattern on the top flange of the ASB beam has no affect on the transfer of axial load or shear in the connection. 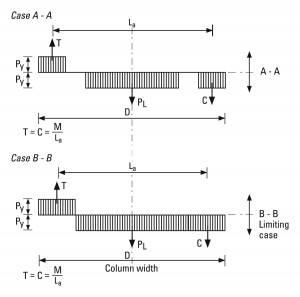 Using the load distributions from Figure 2 for class 1 and 2 sections, the axial loads and shear (if any) may be proportioned to the various components of the connection while maintaining equilibrium and a coherent load path, e.g. the tension T is carried by the bolts on one side of the column and by bending of the flanges and end plates etc. The connection components, bolts, welds, end plates, flanges, web and stiffeners must be checked in accordance with the various parts of BS 5950-1: 2000, particularly sections 4.5 and 6, for their loading.

The provisions of section 2.4.5 apply to all structures designed to BS 5950-1: 2000.  When buildings have to be designed to avoid disproportionate collapse, clause 2.4.5.3.c) requires that “Unless the steel frame is fully continuous in at least one direction, all columns should be carried through at the beam-to-column connection.”  This has mistakenly been taken to preclude the use of discontinuous columns in simple construction. 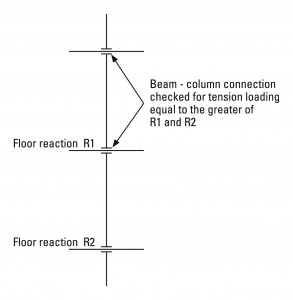 Clause 2.4.5.3.c) has evolved from previous editions of the standard and was conceived before the emergence, in recent years, of discontinuous columns in simple structures in the residential sector; it was never intended to prevent the use of beams supported on cap plates in simple construction (see clause 4.7.7(.1), for reference to cap plates).  This clause is intended to guard against the formation of a local mechanism of four pins at a beam-column connection by ensuring that at least one member is fully continuous in one direction (traditionally, in simple construction, it has been the column section that carries through the connection).  Thus clause 2.4.5.3 c) does not prohibit the use of discontinuous columns in simple structures, provided that the floor beam is fully continuous in one direction at the beam-column connection.

In order to comply with the requirements of clause 2.4.5.3.c) when using discontinuous columns in simple structures, the beam-column connections for each column should be capable of resisting a factored tensile load equal to the largest floor reaction R from either the floor connected to the bottom of the column or the floor below that, as shown in Figure 3.

“The simplest model for a preloaded joint is to consider the applied tension T acting at the contact face or faying surface of a joint, as shown in Figure 3. Clearly, it is impossible to apply load in this way.  Load is actually transferred through flexure and shear in the plies, but if the plies are effectively rigid, the model is realistic. Figure 4 shows the equilibrium of the components (separated for clarity) after the application of the applied tension T, assuming that T does not exceed P. “

They should be inserted after the paragraph that ends “In preloaded bolted joints the load path is different.”

The full and correct version of AD 286 can be found on www.steelbiz.org