A view from the top

Posted on February 1, 2008 by NSC3 in News, Projects and Features 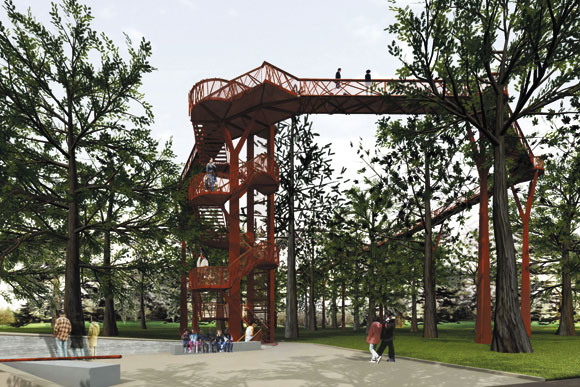 An 18m-high walkway will give visitors to Kew Gardens a unique birds-eye view of the park and the tree canopy. Martin Cooper reports on how weathering steel is helping to create an exciting structure at this World Heritage site.

Due to open in May, the Xstrata Treetop Walkway will allow visitors to the Royal Botanic Gardens
at Kew to embark on a 18m-high panoramic stroll through the canopy of some the park’s oldest and tallest trees, and explore an otherwise inaccessible environment. 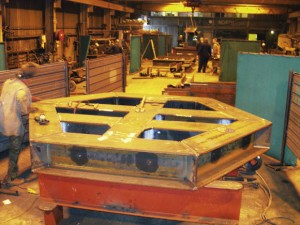 A metal base grillage at Britland’s fabrication yard.

The walkway will consist of a 200m-long looped arrangement of modular trusses, connected by circular node platforms, which in turn are supported  by triangular structural pylons, all of which will be fabricated from Corus’ weathering steel. There will also be a large classroom-sized platform at the mid-point of the walkway to provide space for school groups of up to 35 children.

The project is the most ambitious public installation at Kew for two decades and also includes an underground ‘Rhizotron’ exhibition space. At 1.6m below ground, this subterranean area will give visitors a chance to explore the tree root biology and its relationship with microorganisms.

Tree enthusiast and Kew’s Head of the Arboretum Tony Kirkham, says the project will offer a unique visitor experience, both over and underground. “The tree canopy changes with the seasons and the walkway will allow people an intimate view of deciduous woodland and its wildlife from within the tranquility of the leaves.”

The idea for the high-level installation came about after a temporary scaffold walkway was erected in the Gardens during 2003/04. This proved to be such a success that a permanent structure was decided on.

Chris Smiles, Associate at Marks Barfield and Project Architect, says the walkway will give an up- close experience of bio-diversity as well as blending into its arboreal surroundings.

“We looked at many materials,” he says. “But weathering steel was chosen for its strength, appearance and low maintenance, which are all important criteria as we are working in an environmentally sensitive area.

“The attractive appearance and natural rust colour of the steel will blend into and compliment the surroundings.”

Mr Kirkham goes on to say: “We needed a strong, safe, low maintenance material that would be durable and naturally blend into the trees of this World Heritage Site. Corus weathering steel satisfies all our requirements and unlike some materials, has no run-off that could over time do harm to our trees.”

The natural environment also played a key role in the design of the walkway’s 12 trusses. These steel- framed 12m-long units have been designed using the Fibonacci numerical sequence that lies at the heart of many plant structures. 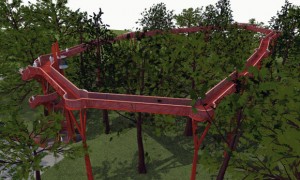 Weathering steel is being used as it will help the structure to blend into the changing treetop environment.

“The simple design creates a seemingly random appearance of truss members, but has an integral strength based on a natural growth pattern,” explains Mr Smiles.

This sequence is used for the spacing of the connection points for the diagonals of the walkway trusses. The 400t of Corus’ weathering steel plate used for this structure was manufactured at Corus’ Scunthorpe works and Dalzell steelworks in Motherwell. Steelwork contractor Britland has since been profiling the steel plate at a number of locations throughout the country.

“Since weathering steel can only be supplied in sheets we chose to fabricate triangular tapered sections that are strongest at the base and can branch out to support the walkway,” explains Jane Wernick, Director of Jane Wernick Associates. “This wouldn’t have been possible with tubular or other forms of steel.”

Each Fibonacci inspired walkway truss will be entirely fabricated off-site and brought to Kew as a complete unit with all fittings such as timber handrails, expanded metal decking and balustrades attached. Each of the 12m-long trusses will weigh 4t.

Off-site construction is a key criteria for the job as this will ensure minimal impact on the project’s surrounding trees. The platform nodes will also be fitted out off-site and brought to Kew in completed 1.5t units.

“Each truss is cut from steel plate and we are using 90% of the material,” explains Britland’s Special Projects Manager David Marriott. “There is a massive amount of cutting to do, but it’s still the most economical way of producing the sections.”

Fabricating the complete truss and node sections off-site means Britland just has to lift them individually into place during the erection process. This lessens on-site impact, while all sections are pin connected which minimises on-site welding. 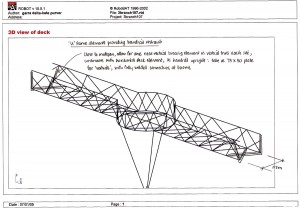 Britland started the erection process just before Christmas and expects to complete the job by early March. The process involves setting the pylons in place first – four supporting most of the node platforms and six for the larger classroom – and then lifting the walkway sections into place between the nodes.

The pylons are set into 6m-deep 273 CHS metal tubes in the concrete foundation. Each set of piles are linked at ground level by a heavy steel 356UC x 368 x 153 metal grillage which connects each of their bases and acts like a bridge. “The grillage spreads the load and minimises the depth of foundation, which prevents any tree root damage,” says Mr Marriott.

Each of the 18m-long pylons weigh about 11t and are being lifted into place by mobile crane. “Once the two sets of pylons are up, lifting the truss into place is just like erecting a bridge,” explains Mr Marriott.

Two sections of the steelwork are, however, too big to be completely fabricated off-site. The classroom platform, and the walkway staircase will be brought to site in pieces and then welded.

Although the walkway will have a lift, primarily for the disabled or those with pushchairs, the staircase is the main visitor access to the 18m-high walkway.

“The staircase forms a fundamental experience of slowly going up into the tree canopy,” explains Mr Kirkham. “I’d like to think that most of the 500,000 visitors we expect every year will use the stairs.”

When the Xstrata Treetop Walkway and Rhizatron open they will encourage visitors to learn more about the crucial role of trees and the valuable ecosystems which live around, under and in them. The installation also forms the centrepiece of Kew’s Festival of Trees which starts in May.