How the completed pavilion will look next year

Next year a new pavilion will open at Headingley, the home of Yorkshire County Cricket Club. NSC reports on a stand which will also be used as teaching space by Leeds Metropolitan University outside of the cricket season.

Anyone who watched this summer’s Ashes Test between England and Australia at Headingley would have noticed the construction site along the Kirkstall Road boundary. Although partially shrouded by advertising hoardings, the beginnings of a new state of the art pavilion were clearly visible, as on the pitch the home side unfortunately toiled towards a heavy defeat.

England of course went on to win the Ashes and the Headingley match proved to be just a blip. The next time these two cricketing foes clash in the UK in 2013, the Yorkshire ground will be able to accommodate more spectators as the new 4,000m² Carnegie Pavilion will have been opened. Fans, the media and players won’t have to wait that long however to enjoy the new facilities as it is scheduled to be open in time for next season’s Test matches.

This five storey Pavilion, built on the site of a previous stand, will house a media box, new player facilities such as changing and treatment rooms, spectator seating over two tiers and executive boxes.

As well as providing Yorkshire County Cricket Club with upgraded facilities during the cricket season, in the off-season (or academic year) the hospitality suites and the media box will become teaching areas and a lecture theatre to be used by the client, Leeds Metropolitan University. 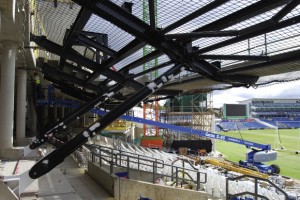 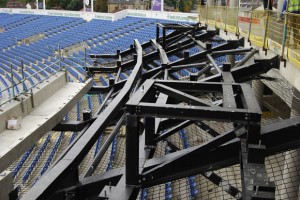 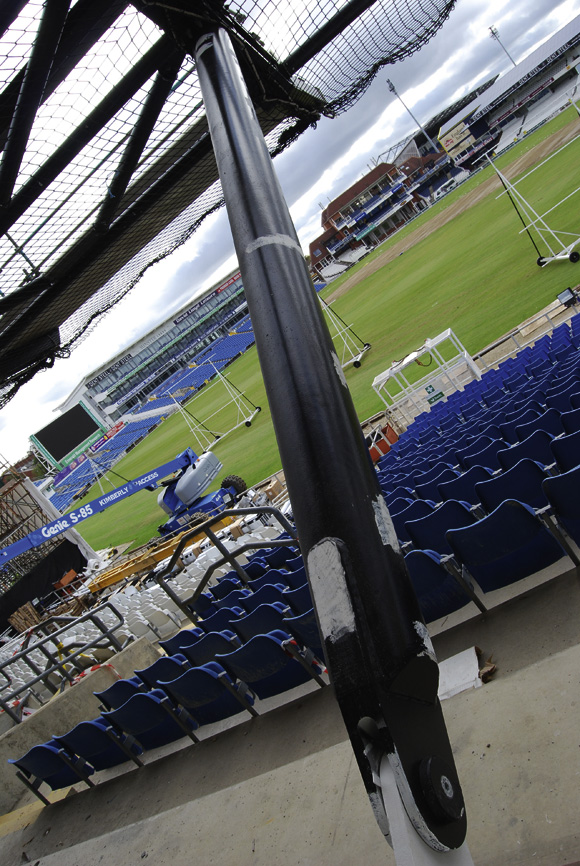 CHS sections were chosen for their aesthetic value 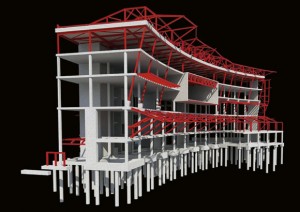 This dual usage of the building was one of the principle issues during the design stage and had implications particularly relevant to M&E installation and where services would be located. Another key issue was the need for long clear spans in the media/lecture theatre box.

The client has opted for a concrete framed structure, but as usually happens with sporting venues, there were several areas where structural steel was the only economical solution. “This is very much a hybrid structure,” points out BAM Project Manager Simon Sutcliffe. “The undulating roof is a steel structure, while achieving the long clear spans necessary for the media box has been done with 16m-long steel beams.”

The media box/lecture theatre is situated almost dead centre of the pavilion and cantilevers out from the main building. Steel beams at 3m centres form the composite roof and floor for the level above. However, another element of the media box which required a steel solution revolved around the glazing panels which wrap around the front of the box.

“Something was needed to hang the glass cladding from and the solution was a steel truss which cantilevers out by 5m and spans between the media box’s two concrete walls,” says John Linnell, Arup Associate.

Topping the pavilion is an eye-catching sloping and undulating roof structure clad with rainscreen cladding. The shape and the way it slopes down at one end was partially dictated by the need to preserve the sightlines of the residential properties which are situated behind the Pavilion. Interestingly, the same sightlines also played a role in the overall shape of the structure. In order not to overshadow nearby houses the building is wedge shaped and steps back by approximately 5m at every level.

The most economical way to form the roof was with a series of 14 steel trusses which vary in length, depending on the position, from 12m to 18m long. At its maximum the roof has a 5m cantilever at the front and all the trusses are 2.7m deep and will house the Pavilion’s plant within their depth.

“We wanted a lightweight roof structure which would give us the clear spans for a plant area,” explains Mr Linnell. “Fixing the cladding to a steel structure was also the best solution.”

Elland Steel Structures are fabricating, supplying and erecting all of the steelwork for the project, as well as laying the metal decking and placing the precast terrace units. The 18m long roof trusses are the largest steel elements delivered to the site, and come fully assembled ready to be lifted immediately into place.

Although there is a small delivery yard at the site entrance along Kirkstall Lane, space is still at a premium on the site. The cricket pitch is obviously immediately in front of the Pavilion and this is strictly off limits to all construction materials.

“Bringing steel to site is a bit tricky but we’ve coordinated so one of the site’s two tower cranes is always available to lift steel into place when it arrives,” says Adrian Smith, Elland Steel’s Contracts Manager. “But our main challenge has been the amount of interfaces we have with concrete, especially the rakers for the upper tier of terracing.”

As with most seating areas for sporting venues, this project has used 8m-long steel rakers which support precast terracing. The rakers however are founded on a concrete floor which was cast prior to steelwork erection beginning. This meant the concrete had to be poured with the cast-in plates positioned exactly where the steel rakers would go.

Elland Steel supplied the plates with the necessary rebar and oversaw the installation. “Because of this we have a lot of on-site welding as fin plates have to be welded to the cast-in plates ready to accept the pin connected rakers,” says Mr Smith.

Supporting the upper tier rakers are a series of CHS columns, chosen as they will remain in full view once the pavilion is open.

“The design and detailing of the raker connections were exacting as careful consideration of the material specification, welding procedures for on and off-site components and erection of the steelwork within demanding construction tolerances were key to a successful project,” says Elland’s Managing Director Mark Denham.

There are more steel to concrete interfaces on the two levels above the terracing, where the executive boxes will be positioned either side of the media box.

Environmental, economic and social sustainability are also central to this project. The sustainability strategy involves creating one dual-use building which will be used all year around, and is designed to achieve a BREEAM rating of ‘Excellent’.

Shaun Russell of architect SMC Alsop comments: “The Carnegie Pavilion has undoubtedly been a real challenge for the client and the whole design team. We consider it to be a ground breaking project.” 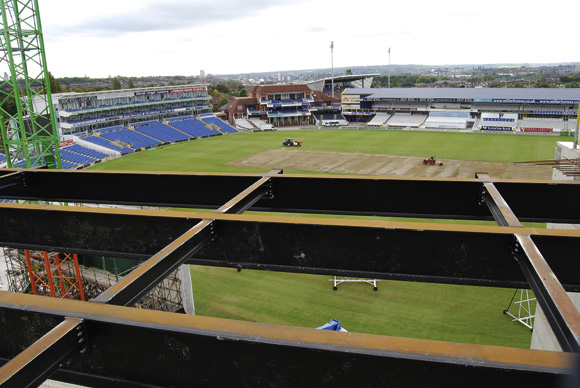