Birmingham’s Wheelwright park, of the folded arch or ‘U’Shape, is Britain’s first.

From Building with Steel May 1963

In an increasingly motorised civilisation finding space for the motorcar has become a major difficulty. Not only must new roads be built to carry the growing number of private automobiles but space must be found of created to park them once they reach their destination. And in an intensely built up country like Britain, parking space is a major problem – as any London car owner knows. Nor is the problem restricted to owners; the cost to local authorities can be staggering. In London, for instance, the City of Westminster’s investment in off-street parking – the Park Lane underground garage and the multi-storey Audley Street garage – amounts to nearly £1.5 million: an average of £1,000 for each of the vehicle spaces involved.

In an effort to solve the problem of providing maximum parking space at minimum cost and with minimum use of valuable urban land Birmingham has turned to a revolutionary new answer, the Wheelwright Car Park, designed by John Smith, F.R.I.B.A.

The Wheelwright design makes use of simple arches; these can be stacked one above the other without the need for spiral ramps. There are no lifts and the driver will park his own car.

The wheelwright unit – up to six ramps arranged in various patterns to fit site requirements – can be built above or below ground. If required, in fact, two complete units can be built one above the other, one being below ground and one in the open. The cost of construction per car space is about £200 and ground area per car space is modest: 82.68 sq. ft for a three-arch and 50.08 sq. ft for a five arch unit. The design can be adapted to a wide variety of sites including many that would not be suitable for other use. One suggestion, for instance, calls for locating the unit along the median strip of a divided motorway.

The Birmingham installation, Britain’s first, is of the U-shaped pattern and is to be built of steel. Though the design is not necessarily restricted to steel construction, steel is preferred for several reasons. In addition to its faster erection time and the smaller space required by the supporting columns, a steel framed unit of bolted construction can – if future planning or building requirements so dictate – be easily dismantled and rebuilt at another location. The Birmingham installation is so designed, the decking being designed to lift out in sections. 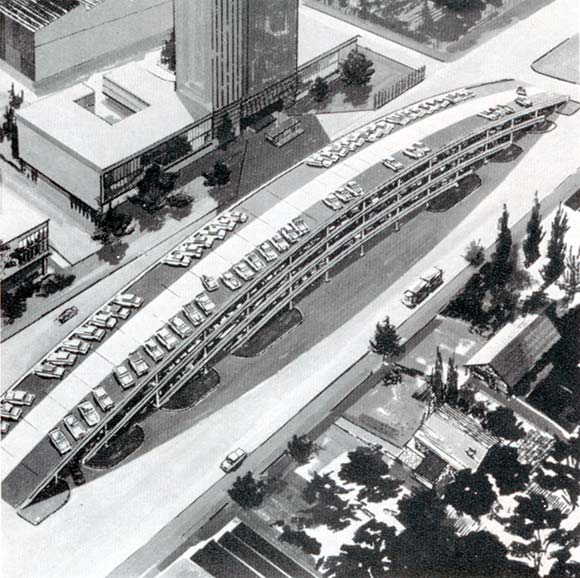 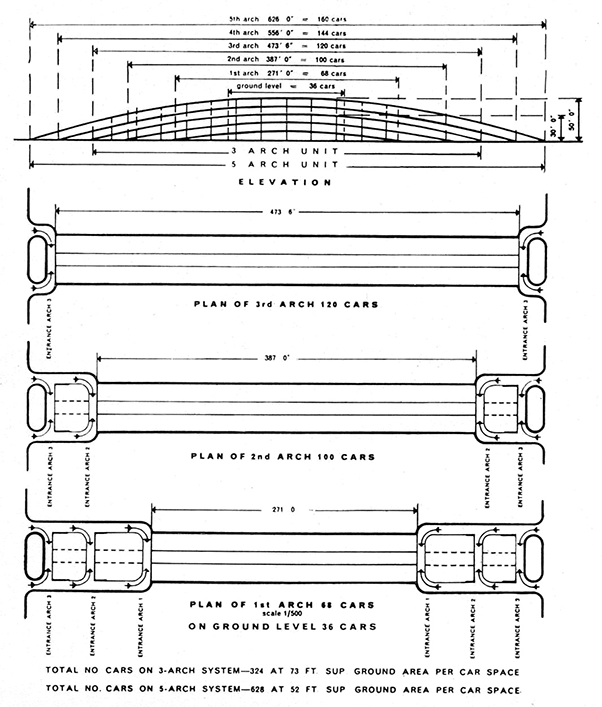