50 years ago: Cable spinning for the Forth Road Bridge

Taken from Building With Steel, May 1962 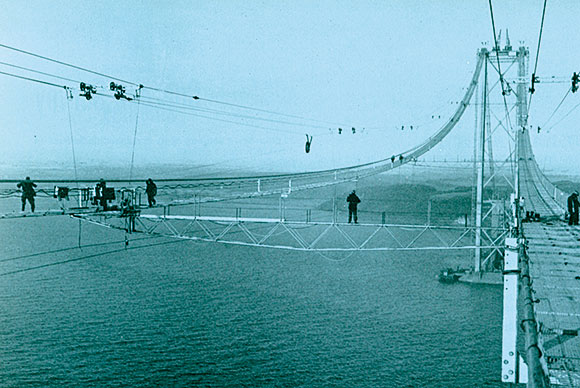 Spinning wheel passing mid span on the West catwalk, during the spinning of the first strand

On 17 November 1961 the first four wires of the cables on the new Forth Road Bridge were hauled over the tops of the 512-ft towers and securely anchored on either shore. Thus was inaugurated the most difficult and outstanding phase of the 3½ years of bridge construction – the spinning of the main cables across the river.

In a suspension bridge the weight of the deck and traffic is all carried by the cables which span between the tops of the towers, dip down over the side towers and splay saddles, and are secured at their ends in concrete anchorages built deep into the ground. These cables are each made of 11,618 parallel wires of galvanized high-tensile steel, and when completed they will be about 22½ inches in diameter.

At anchorages the wires are divided into 37 groups known as strands, each group being looped around a strand shoe which connects it to the anchorage.

Experience has shown that the most practical thickness of wire is about 0.19 in. with an ultimate strength of about 100 tons per square inch. By drawing the wire thinner the ultimate tensile strength would be less and they would become too stiff to bend round the pulleys and reels.

Cables of parallel wire made in this way were invented many years ago by John A. Roebling, and used by him in the famous Brooklyn Bridge (1883) in New York. This system has become the standard practice on bridges of great span in the U.S.A., where the specialised and costly plant require is all in existence. But until the construction of the Forth Road Bridge it had never been used in Europe. For this reason the contractors sought advice from Messrs Roebling of Trenton, U.S.A., who gave most valuable assistance in the design of the cable spinning equipment and the organisation to be set up at site.

In the Forth Road Bridge some 30,000 miles of wire will be needed – sufficient to stretch about 1¼ times around the world. The whole 3,650 tons of wire has now been made. In the Reeling Shop at the south end of the bridge site the coils of wire are loaded onto swifts by the pillar cranes and reeled through tensioning devices onto big drums, 90 of which are available, each capable of taking 7 tons of wire. The individual coils are spliced together by means of cylindrical nipples, into which the ends of wire are inserted and then squeezed in a 200-ton press.

The loaded drums of wire are then mounted in turn on eight unreeling machines set up behind the south anchorage. These machines deliver the wires through a counterweight tower designed to ensure equal tension in all of them, and so to the spinning wheels that carry them over the span.

Before the spinning could start, temporary footbridges or catwalks had to be erected across the river from the anchorages and over the tops of the towers, about 4 ft below the level at which the main cable would ultimately be. Each footbridge is 9 ft. wide and supported by ten strands 1 in. thick – eight of which carry the wire mesh floor of the catwalk, whilst the other two support the wire mesh parapets.

These 20 footbridge strands, which are about 6,000 ft. long were erected by unreeling them one at a time from a drum on a pontoon which was towed across the river. Two strands, one upstream and one downstream, were erected per tide. The timing of this work had to be agreed by the Admiralty and the Forth Conservancy, who were most co-operative. The strands were laid over the main piers and the ends connected to the tops of the side towers. Shipping then had to be warned and stopped if necessary during the lifting of each strand from the bed of the river, which was done at low water.

It was found possible to lift the strands in fast running tides and winds up to 30 m.p.h. The strands brought up with them old coils of wire and anchors from the bed of the river, which had to be removed by the site launch.

When all the footbridge strands had been erected and adjusted to the correct sag, the panels of wire mesh for the flooring and parapets were assembled on them, and they were inter-connected by seven tubular crossbridges and tied down by storm guys to prevent any risk of their being blown over. 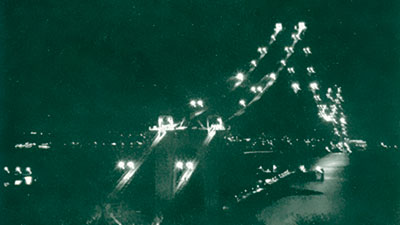 General view of the bridge, showing the catwalks illuminated for cable spinning at night

The next job was the assembly of the ‘tramways’, the reversible hauling ropes which carry the spinning wheels and are supported by a series of beams about 20 ft. above the footbridges. Each hauling rope or tramway carried two 4-ft diameter spinning wheels, one at the north and the other at the south end, and is electrically driven. Each wheel has four grooves on it, so that it can carry four bights or loops of wire and haul them across the span.

When the spinning starts, four wires, taken from the unreeling machines through the counterweight tower, are temporarily connected to the strand show at the anchorage and the loops of wire passed round the spinning wheel. The final wires of the last trip of the strand will later be spliced to these ends.

The tramway drive is then set in motion at the same speed as the unreeling machines and the four bights of wire are carried over the tops of the towers to the far anchorage, where they are taken off the wheel by hand and placed around the strand shoe at the end. When the tramway drive is again set in motion the wheel at the north end will return empty, but the other spinning wheel with four more loops of wire on it will be on its way from the south to the north side.

During the spinning, men are stationed at intervals of about 400 ft. along the full length of the catwalks, and it is their duty to adjust the wires as they are laid against a fixed guide wire – thus ensuring that they all have the same sag in the main span and side spans. Emergency stop buttons are provided for these men so they can stop the wheel immediately in case of necessity.

The spinning wheel travels fast, reaching a speed of 700 ft. per minute, which enables four bights (8 wires) to be placed every 18 minutes. By this means, with men working two 8-hour shifts from 8.00 a.m. to midnight, more than 300 miles of wire can be spun in place every day.

Lights are installed throughout the length of the catwalks, and make a fine sight, festooned across the river by night. In addition telephone lines are laid along the walks and electric control  signals and ‘come-alongs’ assembled for use in adjustment of each of the wires.

After each strand consisting of an average of 314 wires has been spun, in has to be shaken out for its full length at inspection and then banded up again at intervals. The strand is finally adjusted at night, when the temperature is constant all over the bridge, to ensure that it has exactly the right sag in the main span and side spans.

During the cable spinning, some 50 or 60 men, scattered over 6,000 ft. of exposed footbridge, up to 500 ft. in the air, must work in concerted intelligent action day and night, in good weather and bad, for 8 hour shifts without a break, in order to get good production. In addition, other gangs are needed at the tower tops and anchorages to load and unload the spinning wheel and operate the adjusting equipment. The despatcher is the key man who controls the spinning from his office at the south anchorage. Good results can only be achieved by the most detailed organisation, by all men putting forth their best efforts and by teamwork of the highest order.

When the whole cable has been erected and the wires adjusted, they are compacted by squeezing them tightly together so as to form a compact circular section. This is done by four machines that encircle the cables and are moved along them squeezing the wires hard together at intervals of 3 ft. by means of hydraulic jacks. After completion each cable is permanently clamped in position in a machined cast steel saddle on the top of the towers.

Cable bands of cast steel are then bolted at each panel point along the cables, and over these are placed long wire rope suspenders which hang down and carry the deck of the bridge.

The last operation on the cables – which cannot be done until most of the deck has been erected – is that of painting and wrapping them around with binding wire throughout their length between the cable bands. This is performed by means of automatic wrapping machines which encircle the cables and travel up them winding on the wrapping wire as they proceed.

Throughout the construction period the safety of the steel erectors is considered of prime importance. To this end the temporary footbridges are provided with wooden slats on the flooring and wire mesh parapets 3 ft. 6 in. high; safety belts are available for any man who needs one, and the wearing of safety helmets is compulsory for everybody. Bridge construction is so mechanised today that, whereas 4,500 men were engaged on the old Forth Railway Bridge, the greatest number at any time on the Forth Road Bridge will not exceed 300.

The bridge was designed by Mott, Hay & Anderson and Freeman, Fox and Partners for the Forth Road Bridge Joint Board.