20 Years Ago: The Forth Bridge 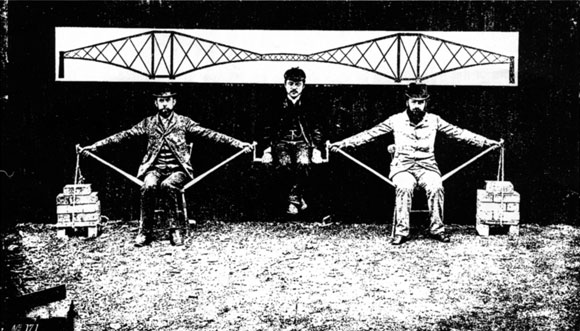 The principle behind the bridge is demonstrated using the Human Cantilever

At a recent ceremony, arranged jointly by the ICE and ACSE, a plaque was unveiled on the Forth Bridge declaring it the foremost Historic Engineering Structure in the World. It has also been named as the 8th Wonder of the World and recently it has been compared to modern technology as the ‘moonshot of its day’. It was indeed a great leap forward in the art of Bridge Construction. This year (1990) we celebrate the 100th anniversary of its construction and again the attention of the world is on its mighty cantilevers.

I have always greatly admired the Engineers and Contractors that developed such an innovative and bold design in the ‘climate’ that existed at the time. The Tay Bridge, designed by Sir Thomas Bouch, had collapsed in 1879 with the tragic loss of a train and all its passengers. Bouch had started work on his plans to bridge the Forth and had completed work on the first pier when the Tay collapse occurred. The Directors of the Forth Bridge Company stopped the works and dismissed Bouch pending an enquiry. The general public lost faith in Engineering.

New plans were prepared by Sir John Fowler and Benjamin Baker. The whole of the Engineering fraternity, and indeed the public at large, were looking on with critical interest as the scheme developed and as construction started. Benjamin Baker was the engineer whose genius evolved the ideas behind the structure of the bridge.

He had long taken an interest in long span bridges and had lectured extensively on the subject, preparing schemes for mighty bridges. He developed the idea of using the balanced cantilever principle to span the Forth. At the Queensferry passage on the river there are two deep channels either side of Inchgarvie Island. There is a rock outcrop on the north shore and to the south of the river there is good boulder clay for foundations. The geometry of the position of the supports was therefore primarily dictated by the geology of the seabed. This did mean that the clear spans would require to be 1,710 ft (521m) which at the time was over 31/2 times larger than any span completed.

Each cantilever extends 681′ 9″ (208m) from the towers. The centre sections of the spans consist of simply supported trusses 346′ 6″ (106m). These are of conventional lattice construction. The simply supported spans are balanced at each end of the side spans by the weight of the masonry portal towers. The centre cantilever has to provide its own stability and the main tower legs are on a much wider base, 260ft (79m). 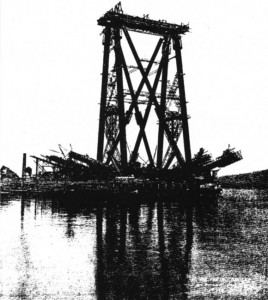 Baker had been carrying out research into the strength of tubular sections at Imperial College and used this principle in all the compression members on the bridge. The main tower legs are manufactured from tubes 12ft (3.3m) in diameter. The bottom booms of the cantilever are again tubular in section tapering from 12ft (3.3m) at the screwbacks to 6ft (1.8m) at their extremity. All the main tensile members and bracing on the bridge are constructed in lattice steelwork.

The bridge is the first major structure in the world to use steel as the main structural material. The manufacture of steel had developed rapidly on a commercial basis with the introduction of the Siemens Open Hearth process during the latter part of the 19th Century. This produced a much more consistent and commercially viable steel than that produced by the Bessemer system, Baker designed the bridge superstructure entirely in Siemens steel, specified a minimum yield strength of 33T/in². There are 55,000 tonnes of steel in the bridge. To provide this quantity in a comparatively short timescale the combined resources of three steelworks had to be used (Blockairn & Newton, Glasgow, Dalzells Works, Motherwell, Landore Works, Swansea). In addition 4,200 tons of rivets were supplied.

The contract for the construction of the bridge was let to Tancred-Arrol. It was carried out under the personal supervision of William Arrol. It was probably Arrol’s genius for inventiveness that led to the tremendous success of the construction. It was virtually impossible to build and temporary staging in the river from which to erect the main spans. The main structure had therefore to be built up and out from the piers. Arrol had to devise means to achieving this.

The foundations were constructed using caissons that were floated out into position and then sunk into the river bed. At the bottom of the caissons the men worked under compressed air to dig through the mud and boulder clay of the river bed before founding on rock head. To facilitate cutting the very stiff boulder clays on the river bed, Arrol developed a pneumatic clay spade that operated by compressed air. With this the clay could be cut away from under the toe of the caissons and these gradually sunk under their own weight until they rested on a secure foundation. The caissons were filled with concrete and capped with granite before the bases to the main towers were constructed.

All the steel was delivered to the fabrication yards at South Queensferry. Here at the top of the Hawes Brae a large area had been laid out with rail sidings, workshops, offices, drill yards, craneage etc. All elements of the bridge were prefabricated in the yards and dismantled and then taken out onto the river to be assembled.

Each tube truss was cut to size and then bent to shape in a specially designed oven. The plates were then assembled in place. The tubes and all the stiffening steelwork had to be pre-drilled to take the bolting and rivets. On average on the Bridge there are some 100 rivets per foot. Arrol invented a multiple drilling machine that could drill up to 20 holes at a time in the bent plates. Thus the whole process of the manufacture of the tubes was mechanised and for its day very highly automated.

A timber ‘slide’ was built from the fabrication yard at the high level down to the jetty at South Queensferry. Down this slide the sections were lowered and put onto the boats that took them out to the working sites.

The construction took place from the main piers with each being built quite independently. The first to be constructed were the skewbacks at the base of each tower. These complex sections formed the junction between the pier and the main structure. In all ten members up to 12 ft in diameter connected at this point. The main towers were built up from this base. Each plate, 16 ft by 4 ft, was hoisted into place and built off the previous section. Once a complete ring of plates was in place, the tubes were riveted up. Purpose made riveting cages were hoisted up the tubes within which a team of eight men worked as a riveting team. These cages contained not just the men and rivets, but a furnace to heat the rivets and stocks of coke for the furnace etc. These cages were to climb each tower until they were completed at a height of 330 ft above the river. Again the cages would be re-used as the main cantilever trusses were built out.

On completion of the three towers, work started to build out the cantilevers. These had to be built out on either side of the towers simultaneously so as to balance the structure. Again the tubes were prefabricated on shore and shipped out. They were hoisted up the bottom boom on a rail track and then lifted into place by one of the many cranes used on the bridge.

Arrol was to become world famous for his cranes. On the Forth Bridge he had to invent a whole new series of cranes to deal with the particular situations. On the main towers large lifting frames were hoisted up the legs as they were being built. On these frames were purpose made Goliath cranes spanning between each girder as well as numerous derricks. On the legs, special cranes named after Queen Victoria’s Jubilee crawled out along the tubes and trusses. All cranes were operated by hydraulics. The hydraulic fluid had to be pumped up the towers and along the cantilevers to the position of the cranes. The pipework for this had to be extended and adjusted daily as the bridge progressed.

The same hydraulic system was used for the riveting machines that were used on the bridge. Again, these machines were specially invented by Arrol. He was to describe the advantages of this tool as follows: “The Hydraulic Riveter doesn’t turn up for work late; its hands don’t shake from excess drink and they don’t strike for more pay.”

Eventually on 4 March 1890 the Prince of Wales was to drive the last rivet, the ‘golden’ rivet, and the bridge was officially open. Many eminent people visited the bridge that day (including the French engineer Gustaf Eiffel). They doubtless were impressed with the grandeur of the bright red structure. Today people still come from all over the world to look at its magnificent form. It is now (1990) celebrating its 100th birthday.

During this last century it has continued to carry the main line trains between Edinburgh and the North. No major repairs or alterations have been necessary. It is indeed a superb example of British Engineering, innovation and inventiveness and undoubtedly the finest example of construction in steel anywhere in the world.