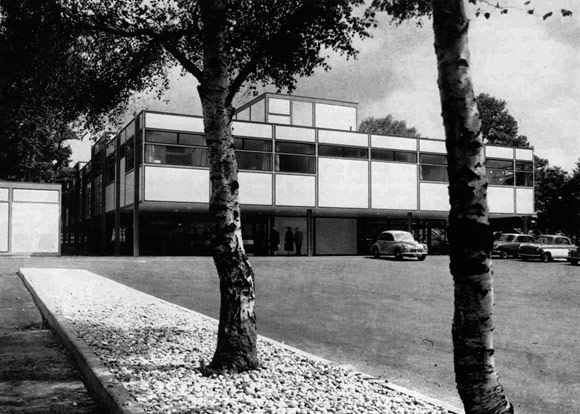 The building embodies a number of quite strikingly original architectural features and in many ways blazes a new trail, especially in the use of exposed steel 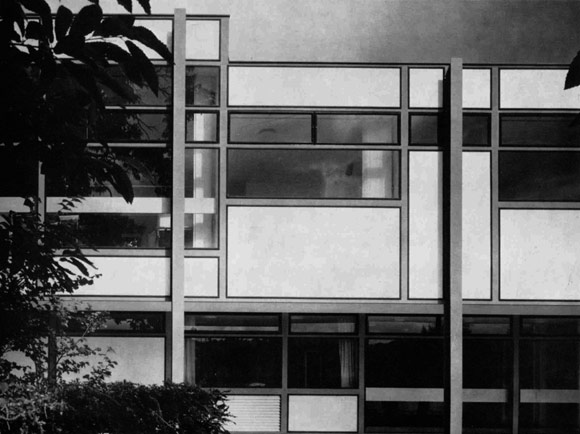 The £250,000 two storey building housing the new Outpatients and Maternity Departments of Sevenoaks Hospital, Kent, is of outstanding architectural interest. The clean, sharp lines of the elevation are striking, the effect being accentuated by the intelligent use of exposed steelwork. The modern look of the exterior is emphasised by the unusually large white vitriolite cladding panel units and the neat manner in which they are mounted.

The building is steel framed and the fully exposed steelwork enhances the natural beauty of the building. This feature controlled the type of fenestration and cladding employed and ruled out the use of factory-made prefabricated units. Instead, the glazing and panels were mounted in framing built on site from individual members supplied precut to length and this meant that, in order to ensure accurate fitting of the members, the column spacing had to be kept within limits of ±1/16  in., an exceptionally close tolerance for work of this nature.

The sequence of construction was as follows. The 8 in. by 8 in. by 31 lb/ft external universal columns and 8 in. by 8 in. by 35 lb/ft internal universal columns were erected first, followed by 21 in. by 63/4  in. castellated beams at roof level and 27 in. by 71/2  in. castellated floor beams: the roof was then added and the reinforced concrete floor cast at first floor level. Use was made of the castellated beams to accommodate services. The first floor beams were secured to the columns with high strength friction grip bolts: all other connections through the building were welded.

The tee and angle framing on the elevation was next welded to the main columns and this is where accuracy of column spacing became vitally important because the framing had to be as accurate as jig-made prefabricated units (±1/32  in.) in order to accommodate the in-fill panels supplied to site ready cut to size.

The scheme adopted for fitting the glass and in-fill panels immediately after completion of framing was simple, neat and speedy. They were merely pushed into neoprene gaskets inserted around the framing; they were held securely and no other fixing was necessary. To permit the use of standard gasket sections recesses were milled along the inner flanges of the main columns to reduce their thickness to that of the adjoining framing.

Because of the speed with which the glazing and panels could be fitted it was possible by careful phasing to complete the exterior of the building as soon as the frame, floors and roof were in position, enabling work inside the building to proceed without interruption  during the winter months. It is thought that this is the first time in this country that the elevation of a building has been constructed in the manner described above.

Because all steelwork on the exterior is fully exposed great care was taken to ensure a smooth and neat finish: all joints were shop prepared by grinding and the welds were ground on site both for the sake of appearance and to ensure accurate fitting of the panels. The exposed steelwork was supplied shot blasted and primed and, on site, was given two coats of stainless steel enriched sealer giving full corrosion protection. 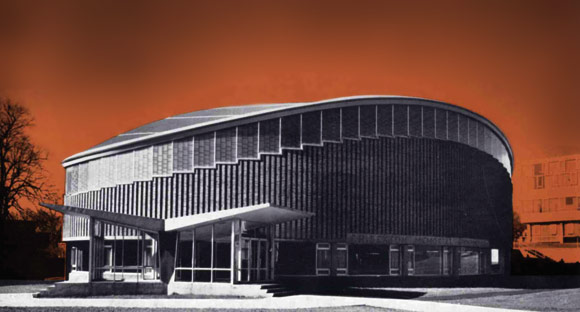 After careful analysis of the factors involved, steelwork was chosen in preference to other materials for the construction of this sports hall in Halifax, Nova Scotia, Canada. As this was an engineering campus, it was felt that the design should be ‘structurally unique’, provided it wasn’t too expensive. 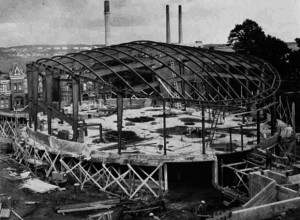 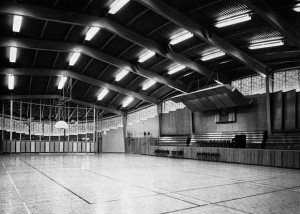 This requirement for structural uniqueness to a limited budget  became the prime objective for the architects and consulting engineers: Duffus, Romans, Single and Kundzins. They met it by adapting a rigid steel frame to an elliptical plan form and a curved roof configuration on the major axis, providing clear spans of 130 ft. in one direction and 90 ft. in the other. The shape of the roof – with its exposed curved steel purlins and steel deck – was intended to express the imaginary curve formed by a flying basketball.

It was the fixed size and shape of the basketball court on the main floor that was the main factor responsible for the choice of an elliptical plan form, a shape providing a compact and economical solution to the layout problem. Even after making allowance for the complications arising from the elliptical plan and curved roof, the design using steelwork was cheaper than the alternative arched concrete design considered. Another factor favouring steel work was the possibility that construction would have to take place during the winter. The 77 tons of steelwork was fabricated in 14 days and erected in ten.

In order to blend in with existing buildings on the campus, concrete, light brown brick and translucent plastic panels were used for the exterior. Inside the main floor the exposed steelwork of the ceiling and the undersurface of the corrugated steel deck are painted.