40 Years Ago: New Flyover at Croydon 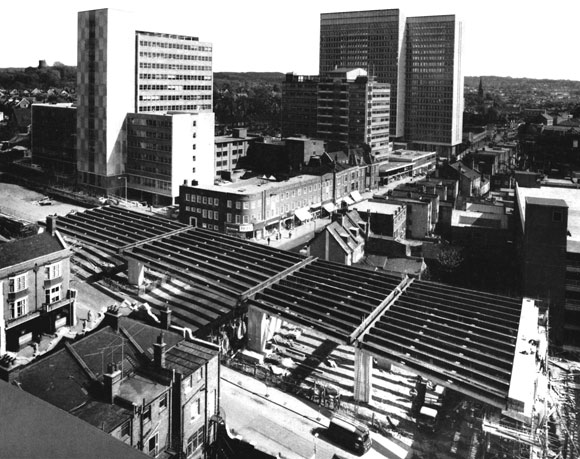 The viaduct portion of the new High Street–Old Town flyover in the Greater London Borough of Croydon provides an interesting use of Preflex beams for this type of structure. The preflexed section over the high street has four spans of steelwork, ie 85ft and 87ft long comprising nine beams each, and two 56ft incorporating 11 and 13 beams respectively. On each side are shorter spans using prestressed concrete standard bridge beams.

A feature of the construction is the inclusion of the support crossheads within the depth of the deck, this being achieved by supporting twin universal beams on stools carried on special bearings. The longitudinal beams are bolted to these transverse beams with high strength friction grip bolts and the whole encased in concrete to the same thickness as the external deck beams, ie 47½in.

The choice of preflex beams for this particular project was influenced by several factors, one of particular importance being the need for quick construction so as to avoid as much possible interference with the dense pedestrian and vehicular traffic. The 18 longer beams were in fact transported from a railhead about two miles from the site and placed in position in only 18 hours, some of the beams taking as little as 20 minutes to fix. This work was undertaken in May of this year (1967) during a Saturday night and Sunday when the road could be closed to traffic. The beams for the two shorter spans were placed in position during normal working hours.

The beams are of shallow depth and this was another contributory factor to their choice because the depth of construction in these four spans had to be kept to a minimum in order to maintain clearances over the highway. Erection was simplified and speeded by the fact that due to their comparative lightness the beams could be conveniently handled by a single mobile crane.