40 Years Ago: Head Office for Hearts of Oak Benefit Society 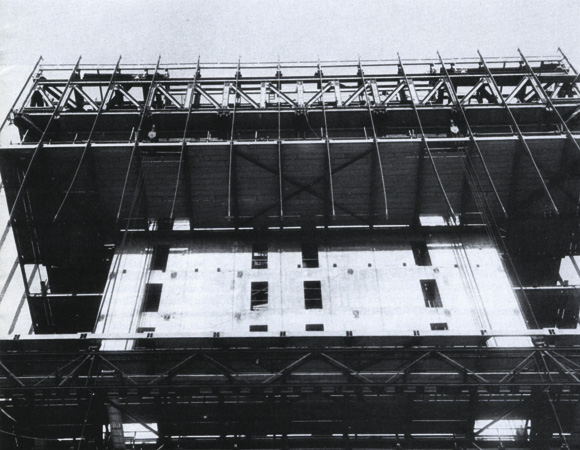 The Hearts of Oak Benefit Society, which operates within the framework of the Friendly Societies Act, has grown from humble beginning in 1842 to become one of the foremost friendly societies in the country. It is appropriate, therefore, that the new Euston Road, London, Headquarters building should be a prestigious edifice and, because of the growth record, that every available square foot of the site should be used effectively.

A normal tower block was the ideal solution but the height necessary to achieve the required usable office space was unacceptable from a town planning viewpoint because of the proximity of St Pancras Church. The shape of the building as dictated by the Town Planning Authorities led the Society’s Architects to design the building on the suspension principle so that there are no columns intruding on the office floor space, and with a podium of three storeys, inclusive of basement, which further compensates for the loss of space due to reduction in height.

The construction of all buildings of this type follows the same principles. A concrete core is built to house stairs, lifts and other services and to act as a stiff member to transmit all horizontal forces to the foundations. Then an umbrella structure is cantilevered out at the top and from the periphery of the suspenders are hung to support the floors.

In the case of the hearts of Oak building the concrete core, supported on a raft surmounting under-reamed piles reaching 40 to 50ft down into the London clay, was built by traditional methods with a vertical tolerance of only ±½in in some 200ft. 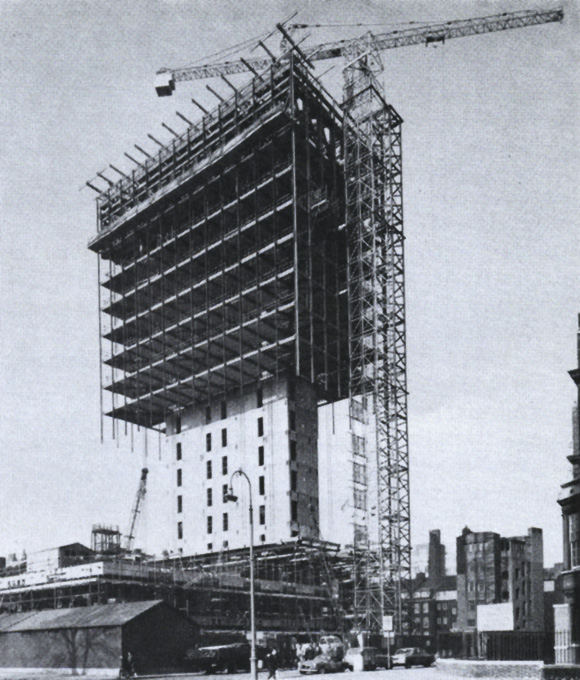 View of the construction at the halfway stage 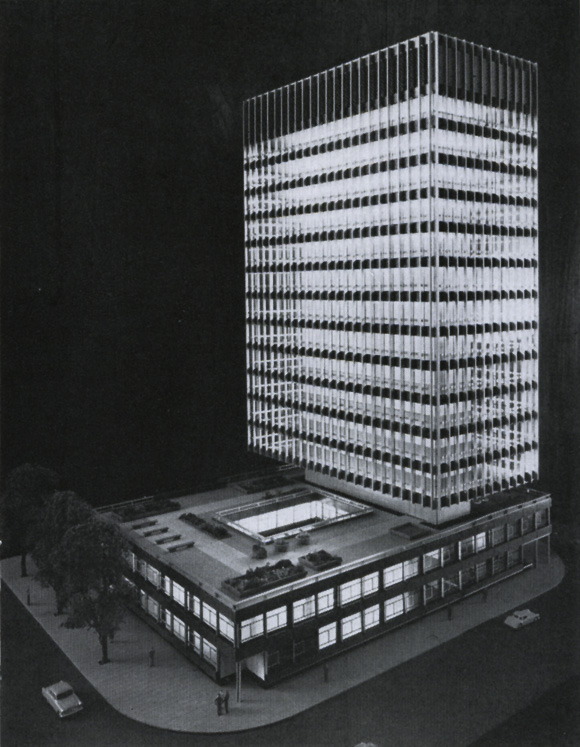 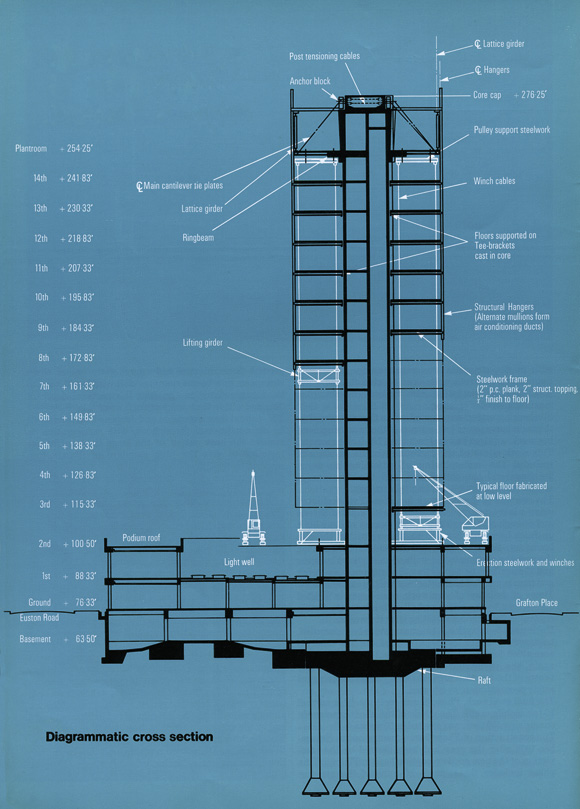 Diagrammatic cross section of the project

The Hearts of Oak development is unique in that the hangers are external to the cladding. This has been done to obtain the maximum usable floor area and the achieve a prominent external architectural feature. All the hangers will be clad in stainless steel which will be shaped to form vertical tracks for the maintenance cradles. The intermediate mullions, likewise external to the enclosing envelope and clad in stainless steel, will also serve a dual purpose. In addition to supporting the glass and block granite infill panels, they will be used as air conditioning ducts and will thus help to conserve space inside the building. The glass itself is unusual; the type to be used has been specially chosen because of its anti glare and insulating properties so that occupants will be able to work in comfort and the air conditioning plant will be smaller because of the reduced refrigeration required.

This consists of a basement for parking cars and two floors for additional offices. The basement and the exterior beams above ground level are of reinforced concrete construction but all interior framing for the offices is of steelwork, high yield stress steel again being used to minimise weight and conserve space. Large circular holes in the webs of the floor beams throughout their length serve for the passage of services within a limited floor depth.