20 Years Ago: The Dartford Bridge 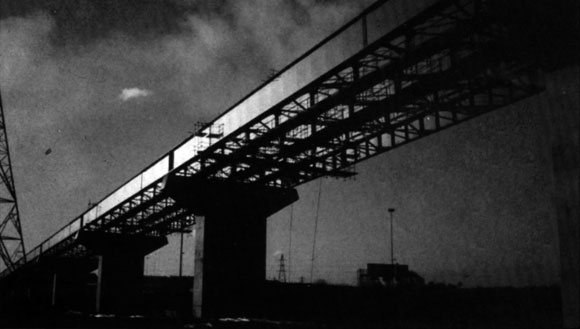 The Dartford Bridge, now well into construction, is the most significant steel bridge to be built in Great Britain since the completion of Humber and Kessock in 1981 and 1982. The total length of 2,872m will make it the second longest bridge in Britain and third longest in Europe. It includes a crossing of the Thames in a 450m cable stayed span, the longest of its type in Europe and second equal longest in the world.

The arrangements for promotion and construction of the bridge, which will double the capacity of the existing tunnel crossing at Dartford, are novel, the project being entirely privately funded. A company, Dartford River Crossing Ltd (DRC) was formed by Trafalgar House and three financial organisations to take over the tunnels, construct the bridge and operate the combined toll crossing for a concession period of 20 years. DRC then placed a contract for design and construction of the bridge with a consortium of Cementation Construction Ltd, responsible for the subs structures and other concrete works, and Cleveland Bridge, responsible for the steel superstructures. Cleveland Bridge designed the superstructure of the approach viaducts in their own design office. For the cable stayed bridge superstructure they employed Dr Ing H Homberg and Partner of Hagen, West Germany, who had collaborated with them for the Kessock and other bridges. The sub-structures were designed for Cementation Construction by TH Technology Ltd.

The traffic arrangement is unusual. The bridge will have four lanes undivided and will normally carry all southbound traffic. The two 2-lane tunnels will take all northbound traffic. Diversion of traffic between the tunnels and bridge  will be provided for, in the event of breakdowns or other emergencies, exceptional weather or to deal with the transport of special or dangerous goods. The bridge has been designed to take live loading to Department of Transport BD 23/84, subsequently the heaviest in the world, including the case of any cable removed for repair or replacement.

The new crossing comprises approach viaducts of 21 spans, generally 50.67m on the north side and similar spans on the south side, leading to a cable stayed bridge with a main span on 450m and three back spans or anchor spans on either side, totalling 812m. The deck rises to give clearance of 57.5m over the navigation channel, thus requiring a gradient on the south, downhill, approach of 4%.

The cable stayed bridge is a development of the Kessock design, the deck structure being of open plate girder construction only two metres deep with steel and composite concrete roadway. This allows normal and easily replaceable hot rolled asphalt surfacing to be used. The main span deck is supported along each edge by two systems of 28 individual cables, in a modified harp pattern, from steel box pylons rising to a height of 137m above water level, with corresponding cables to anchorages along the back spans. To cater for uplift in normal loading conditions, the back spans deck is connected to its piers by steel pendel links. The cables are round wire spiral strands and include the largest size of these yet made for bridge work with a guaranteed minimum breaking strength of 2,280t. The main and pendel piers below deck level consist of individual slip-formed concrete legs. The transition piers at the junctions with the approach viaducts are massive slabs, to provide a visual break between the different types of construction.

The total weight of structural steel and cable in the crossing is over 20,000t. With the object of assured rapid construction and minimum weather interference, all site connections are by high strength friction grip bolts, of which there are over three quarters of a million.

An extensive series of  wind tunnel tests was carried out on a full aero-elastic model of the cable stayed bridge to prove aerodynamic stability in the final and erection conditions in wind regimes representative of the actual site.

Erection of the viaduct steelwork is by heavy crawler cranes, lifting pre-assembled groups and girders and cross bracing, working progressively from each abutment to the transition piers. This is complicated by crossings of a main line railway and main road and by the proximity of two overhead electric transmission lines. Ground conditions have been found to be very poor and much local reinforcement is necessary for operation of the cranes. deck slab concreting follows progressively in a predetermined sequence behind the steel erection.

The design of the cable stayed bridge has been based on using the largest in-shore floating cranes to erect the main girders of the back spans in span length pieces and the steel pylons in only three pieces to each leg. The remaining back span deck steelwork is erected by special derricks travelling on the deck. these derricks then erect the entire main span in 15m bays, the cables being installed and tensioned on each bay before proceeding to the next. As the contract programme requires the cable-stayed bridge superstructure to be erected before the approach viaducts are completed, all material has to be lifted up 50m at each transition pier by two large capacity tower cranes. by these means the main span is erected with no interference to the shipping channel.

The entire steelwork for the crossing is to be erected and the bridge completed for traffic in under two years, a world record for the size and type of structure, and the total construction period including for the substructure will be less than three years. At the time of writing, the substructure is virtually complete, about  half the steelwork is erected on each viaduct with deck concrete following and steel erection is proceeding on the back spans on both sides of the cable stayed bridge. The new crossing is due to be completed in mid 1991.