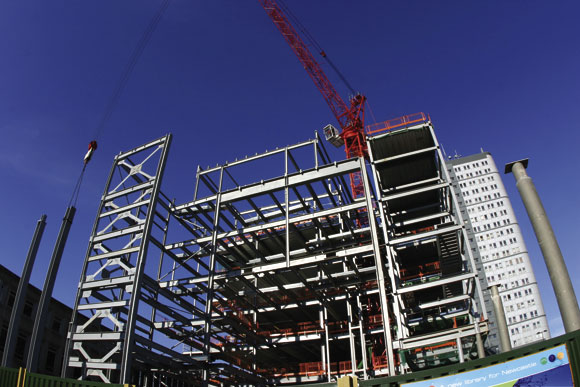 The steel frame accommodates a tradi- tional layout as well as the open atrium.

Newcastle’s new City Library incorporates a complex steel and glass design and is set to be a stand-out civic building when it opens in Summer 2009.

Traditionally, public libraries do not advertise themselves; they tend to be functional buildings that appear to be quietly getting on with the serious business of educating and improving the lives of people who use their facilities, rather than bold statements of architectural design. 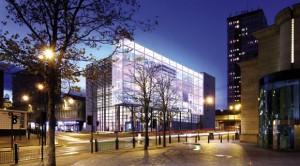 The ‘glass box’ frontage as visualised by the architectural model.

That all changed with the opening in 2000 of the Alsop & Stormer-designed Peckham Library in South London, which has won countless design awards and features a striking exterior that makes its presence very much felt in the local community. Now, Newcastle City Council is following suit, with the construction of a new library in the city centre that is sure to catch the eye.

The new Newcastle City Library is being built as part of a £40.2 million PFI initiative between the local authority and a consortium led by Kajima Partnerships, the developer and sponsor, in what is the largest library PFI undertaken in the UK to date. It is currently under construction on the site of Newcastle’s old library – itself designed by iconic architect Sir Basil Spence – and is due to open in Summer 2009.

Architect Ryder has come up with a design that announces itself in bold terms, meeting the client’s desire for a high quality civic building that will attract both new and existing library users.

“We wanted the City Library to be a symbol of creative design and a model for 21st century library facilities,” explains Ian Kennedy, Ryder Architectural Director. “It will be an inspirational place, with spaces for reading, learning, research, relaxing, meeting and working.”

One of the most striking features of the new building is the glazed grid on John Dobson Street which returns on to New Bridge Street at the front of the building, giving passers-by the impression of a large open library bookcase. Behind this box is a four storey, 23m x 15m atrium that will fill the library with light. Artist Kathryn Hodgkinson has created an etched design that runs across the entire area of the glazing on the John Dobson Street elevation, inspired by interviews with 2,000 Newcastle residents about their hopes and dreams for the city. 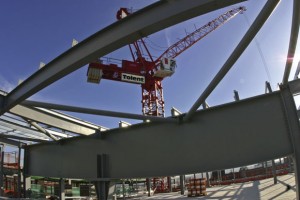 The largest beams span the atrium and perform- ance space.

Internally, the glass box and atrium account for about one third of the space, with the remainder of the six storey building designed to the standard of a modern office development, with raised access floors, to give it as much flexibility as possible for use of the space. While this enables much of the structure to be built on a regular grid – measuring 7.2m x 9m – there are exceptions, for example to accommodate a 180-seat performance space on the third floor.

Initially the structure was designed as a concrete frame, but it has since been re-engineered in steel to reduce costs. “The steel frame has been designed around the architectural constraints, so there are a lot of rolled hollow sections,” explains Gerry Gray, Project Engineer at structural designer Mott MacDonald.

For the areas that will contain offices and book collections, the frame is being constructed using 533 x 210 x 82 main beams with 406 x 178 x 54 secondary beams. Columns vary in height and size, with the largest – adjacent to the library’s main walkways and brise soleil – being 406mm diameter hollow sections constructed in a single 25.8m length.

Three transfer beams at high level enable the loads to be carried above the larger spans of the atrium and the performance space. All three are formed using plate girders, with two measuring 14.4m in length x 1,250mm in depth. The third also spans 14.4m, but is 2m in depth, has 45mm thick flanges and web, and weighs 17t. “The largest transfer beam is positioned at roof level and has five floors suspended below,” explains Mr Gray.

The “glass box”, which runs the whole length of the John Dobson Street elevation, is principally separate from the main structure. It sits on 6m long 762 x 267 x 147 beams with short ties back to the main structure. The supporting columns are CHS 457mm diameter, reducing to 355mm at the top to create an architectural feature.

Inside the box all the steelwork is exposed, and consists of 300 x 200 x 12.5 RHS beams and 250 x 250 x 8 SHS columns. Because they are on display, the connections between these beams and columns are an important element in the architectural expression of this area of the building. Detailing these connections was the job of the project’s steelwork contractor Conder Structures.

“The main criteria was the requirement that no bolts would be showing, so that the entire structure of the glass box appears to be of continuous steelwork,” explains Conder’s Managing Director Jason Hensman. 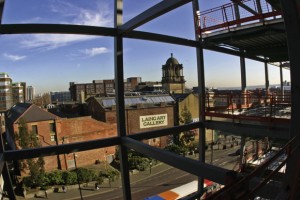 The new library is set to be a landmark in the city centre.

The company developed two prototypes for the client to choose from, the winning design involving the welding of hollow 300 x 200 x 16 RHS brackets with their own 6-hole end plates that matched the beam ends. Access hatches measuring 120mm x 120mm were cut into both the beams and the columns so that the erection teams could fix the bolts between the two. These hatches are closed with 3mm thick 200mm x 170mm cover plates so that the bolts are not visible, and the steelwork appears to be continuous.

Conder – which is working for main contractor Tolent – began design and fabrication of the Newcastle City Library frame in July 2007, and has just completed erection of all 900t of steelwork. To catch up on time lost due to high winds in December, the erection team worked over the Christmas holiday period.

“The job has gone extremely well with the exception of the weather,” says Mr Hensman. “However, we have worked extremely closely with the main contractor, Tolent; we used mobile cranes to accelerate the programme in a number of areas, which has limited the delays caused by high winds.”

The entire project is due to be completed in Summer 2009. Its facilities will include a crèche, café, internet access, dedicated areas for children and meeting rooms for community groups. Among the items on display will be the collection of 18th century engraver Thomas Bewick and the Thomlinson Library, whose 17th and 18th century collection of books formed the core of Newcastle’s first public library.