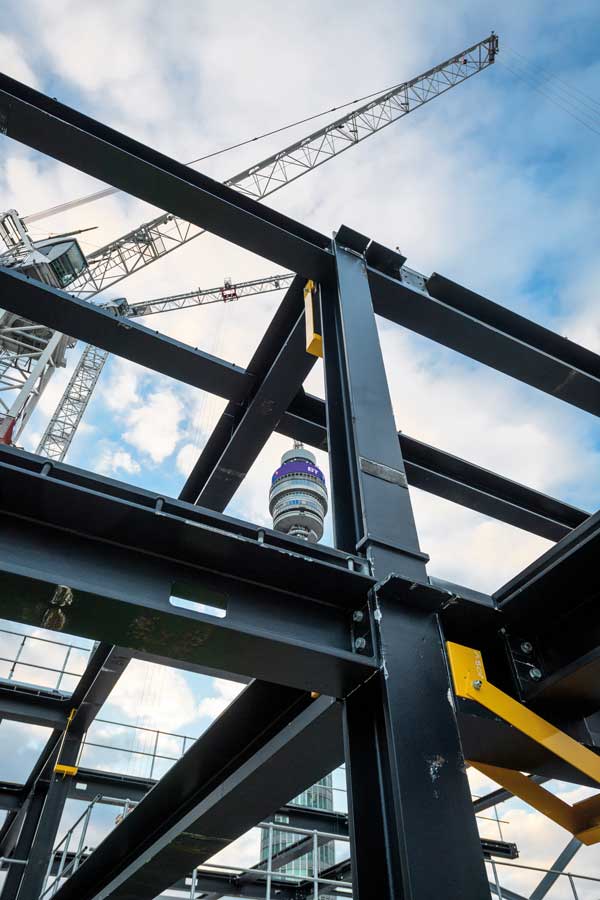 Fully exposed steelwork and floor slabs are the order of the day for a high-profile architecturally-driven mixed-use scheme in London’s Fitzrovia. Martin Cooper reports.

Overall, the 35,300m² scheme comprises three separate buildings: the main 80 Charlotte Street part – a nine-storey new build that infills a rectangular block that is also bounded by Whitfield Street, Chitty Street and Howland Street – as well as the adjacent 65 and 67 Whitfield Street. The latter are two existing structures that have been renovated, with each one receiving three new steel-framed floors enabling them to offer 1,020m² of offices and 4,180m² of residential space.

Befitting a project in such a prestigious location, the design of 80 Charlotte Street has used a bespoke steel-framed solution, whereby all columns and beams will be left exposed within the completed scheme, along with the underside of the precast flooring planks.

Discussing the design team’s choice of a steel-framed solution, Make Architects Jason McColl says: “The client liked the idea of an expressed steel frame and the slender columns the material allows.

“While the kind of tenants the scheme and the area has attracted don’t really want a traditional ‘white box’ office environment where everything is boarded up and hidden from view.”

The majority of 80 Charlotte Street has been pre-let to Arup Group and The Boston Consulting Group (BCG). 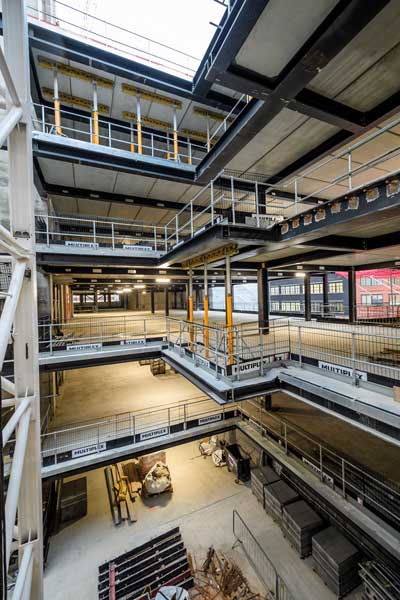 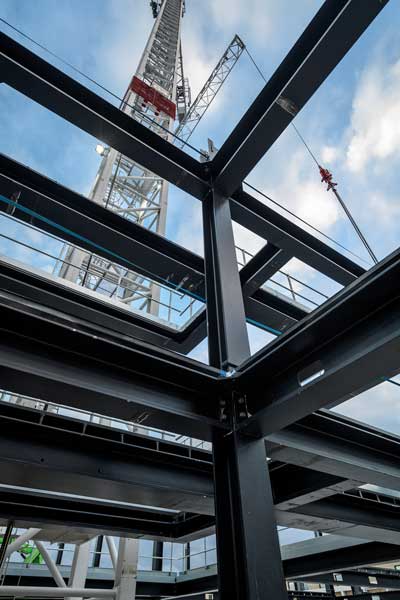 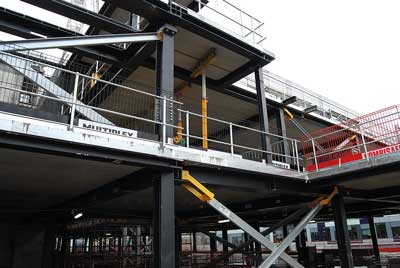 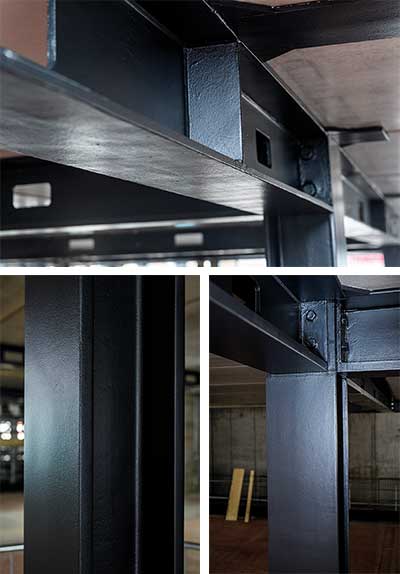 Sometimes referred to as an industrial-look, the exposed steelwork combined with the 9m × 6m column grid pattern, create a contemporary and spacious office environment.

Many offices may have a larger column pattern, but the 9m × 6m grid was chosen as the optimum size to accommodate the thin precast planks that allow the project to maintain a 3.3m floor-to-ceiling height and get nine-storeys into a designated height restriction.

Having the steelwork fully exposed within the completed building means the connections and their bolts will also be on show. Plenty of thought went into the choice of bolts and hexagonal units were chosen as the design team and client thought they offered a look more in keeping with the rest of the scheme.

“The exposed internal steelwork and the connecting bolts will be a feature element within the building, and so all of the end plates are flush and the beams and columns are all being repainted once they have been lifted into position in order to get the best possible high-quality decorative finish,” says Bourne Steel Divisional Manager Kevin Springett.

The precast flooring planks are supported within the steel beam’s depth, thereby creating a clean, flush and uniform surface. Because the underside will be left exposed, the precast planks have been manufactured with a high-quality finish.

“The challenge for the team has been to understand the protection the steel and precast units need during the transportation to site and installation in order to manage the expected quality finish,” says Multiplex Senior Project Manager Stephen Sebborn.

Adding to the scheme’s industrial look, all of the services, which will be accommodated within bespoke cells cut into the plate girder beams, will also be on show within the completed building.

As well as fabricating, supplying and erecting the steelwork, Bourne Steel also designed and installed the 6m-long precast planks. A grand total of 4,800 of these prestressed planks were needed for the project, with the majority being bespoke units that could only fit in one particular location.

“Although the column grid spacing is regular throughout the scheme, there are some slight adjustments because of the shape of the plot and building, and so there are almost 100 different plank types,” explains Mr Springett.

“We are also working to some exceptionally tight tolerances as there is only 2mm in level between each plank in the centre of the span.”

Previously, the 80 Charlotte Street site was occupied by a concrete-framed office block built around a central courtyard. The concrete frame is being replaced with a steel-framed structure, while the original Whitfield Street elevation is now tied into and fully supported by the new frame.

“This is a Conservation Area and the retained façade, as well as being historically significant, helps the new building deviate away from being one large form,” says Mr McColl.

“Brickwork and concrete panel cladding along the other elevations continue this design.”

Steelwork for the new 80 Charlotte Street structure starts at basement level and then incorporates a double-height ground floor before extending upwards to the ninth floor with a uniform grid pattern.

Using all four of the site’s tower cranes, alongside one mobile crane during the early stages of the project, Bourne Steel erected the steelwork by dividing the main plot into five areas.

Working around the building’s one centrally-positioned core in a clockwise manner, the steelwork was erected two floors at a time. The flooring planks were installed behind the steel programme and temporarily propped until the concrete topping had been cast and cured.

Once the topping was cured the props were dismantled, to be reused elsewhere on the job, while MEWPs were then able to use the recently formed floor to erect the next two levels of steelwork.

It was a complex erection programme because of the bespoke nature of the steel and flooring.

“It was completed ahead of schedule and the fact that the team did a trial erection before starting on site, using four columns, four beams and six precast planks, to show the client how it would look was a great help and prevented any problems,” adds Mr Sebborn.

One of the site’s tower cranes is positioned outside of the project footprint along Howland Street, but the other three are all within the new steel frame. Once the scheme is nearing completion and the cranes are removed, the gaps they leave behind in the frame will become atria that allow natural light to penetrate into the building’s inner areas.

The 80 Charlotte Street development is due to complete in early 2020. 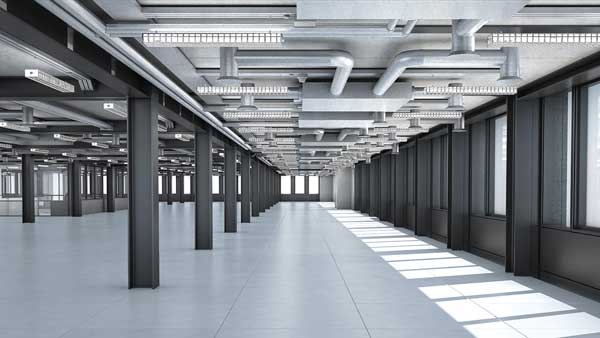 Richard Henderson of the SCI discusses the solution adopted.

80 Charlotte Street has a simple beam and stick steel frame with lateral stability provided by concrete cores. The simplicity of the steelwork belies the effort that has been put into maintaining a 450mm high structural zone at floor levels to make the most of the available storey height of 3.335m and to comply with British Council for Offices guidance. Prestressed precast planks 100mm thick with fair faced soffits are supported on shelf plates welded to the webs of 450mm deep primary beams. A 50mm concrete topping completes the concrete floor. The primary beams stand down by 300mm so that the upper third is embedded in the floor slab. These beams are provided with holes in the webs for reinforcement to pass through for tying and anchorage. Columns are tied together for robustness in the direction perpendicular to the primary beams by 150mm deep tie beams within the depth of the slab such that only the bottom flange is visible from below. The zone immediately below the slab between the primary beams is therefore uninterrupted by structure and the horizontal runs of heavy building services from the core are uninhibited.

In certain areas, the orientation of the precast planks changes so that some beams support planks on one side only. These beams have been designed to carry the planks on their top flange and are 300mm deep to maintain the same level to the underside of the structure throughout the floorplate. The webs of these beams and of primary beams which cross the runs of services have been perforated where necessary to maintain the same zone for services everywhere.

The steelwork is to be left exposed when complete and the detailing of the connections is simple and unfussy. Flush end plates have been adopted with toe plates in certain places. Some tie beams have also been provided with horizontal triangular fillets in the connection of their bottom flanges as an architectural feature. Fire protection requirements for beams which pass through compartment walls and for beams with top flanges at floor level were optimised using computational heat transfer modelling. The structure has a 90 minute fire resistance period and is provided with intumescent paint pigmented with a dark grey colour to add to the industrial feel of the space.