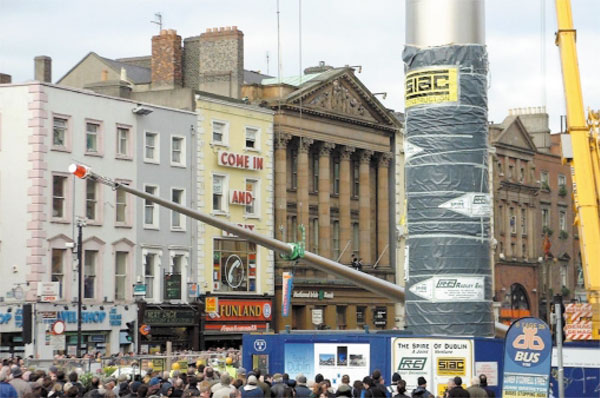 FACT FILE: The Spire of Dublin

Officially called “The Spire of Dublin”, the 120m (393 foot), stainless steel polished and illuminated sculpture in O’Connell Street is a striking addition to the city. It tapers from 3m (10 feet) in diameter as its base to 15cm (six inches) at its peak.

During the day, the surface reflects light and the surrounding streetscape. After dark the lower two-thirds of the monument is softly lit. The top 12m (39 feet) is honeycombed with 11,884 holes, through which light-emitting diodes shine.

A special internal damping system is built into the spire to minimise wind movement. There is internal ladder access, and lighting, for maintenance purposes. The base of the cone is of Kilkenny black marble.

The project began for Barnshaw in early 2001. After receiving the order, the company started bending trials on various thicknesses of stainless steel plate. The purpose was to ascertain the optimum procedure and tooling to create both the exact shape and the perfect finish required by the architect, Ian Ritchie.

The plate was delivered to the works with a brushed satin finish on one side. After welding the pieces together the joint area was re-polished to match the rest of the surface. Then another finishing process was added: the entire piece was shot-peened. In this method tiny beads of metal are shot at the surface to polish and embellish it. To get this right took considerable time and experience by experts in shot-peening from the Metal Improvement Co. in London. 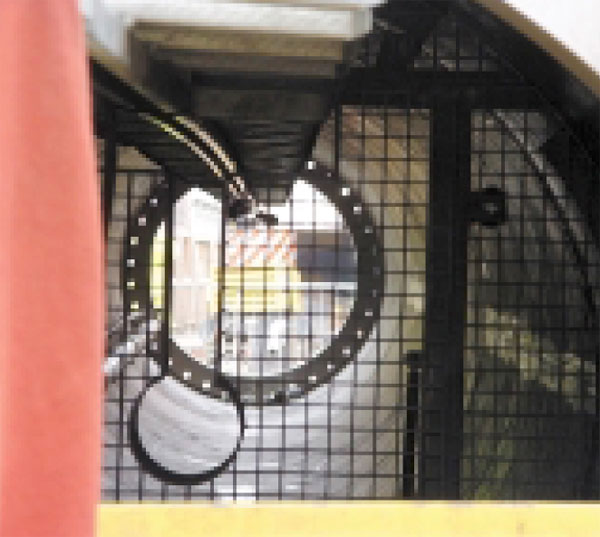 A curving 40mm thick polished stainless steel plate creates a number of forming problems. Firstly, the pressure needed to bend it can mark the surface, which was unacceptable for this application. Secondly, due to the conical shape, every piece was a different size, as the diameter of the spire reduces with height. The forming had to be right first time and there was no margin for error. The plate could not be reworked in the normal way when forming cones for the general fabrication industry. The tolerance on the bending was + or – 1mm on the diameter. The straightness over the length had to be within 6mm of the exact centre line.

Two of Barnshaw’s companies formed the sections. The Hamilton branch in Scotland curved the thick segments at the base of the spire using a modern asymmetric plateforming machine. This has been used to curve plates for North Sea oil rigs, reactor vessels and other high profile and high tolerance jobs, so it was ideally suited to this work. The smaller plates, which were too small for conventional rolling, were formed at its Press Braking and Shearing Division in the West Midlands. One of the largest machines in the UK, a 1000 tonne press brake, formed the top pieces. The tolerances were extremely tight for this thickness of plate and fabrication method, but with careful work and close supervision, it was possible to keep within them.

Before the plates were marked up for bending and inserted into the machine, the whole area, and machine itself, had to be cleaned to ensure there was no carbon contamination of the stainless steel. All other potentially contaminating operations, such as grinding and welding, were stopped while the plates were being formed to reduce carbon particles floating in the air.

The bending machine rolls were fully ground before work began to ensure no indentations were put into the plates. The machine was set at its slowest speed to ensure there was no slippage during bending.

The first piece of the spire was installed on 18 December 2001. One of the biggest mobile cranes in Europe, located at the junction of O’Connell Street, Henry Street, and North Earl Street, was used to lift it. 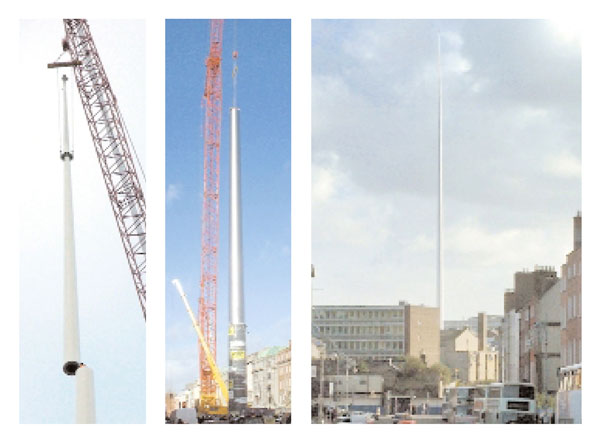 The last two pieces of the spire were added on the night of 20 January. A large crowd gathered in O’Connell Street to watch. Once started, the lift didn’t take long and when the workman inside, James Duncan, grabbed the last piece a huge roar came from the crowd. He guided the piece in over his head and, as he disappeared inside, the Spire of Dublin City was complete.

A pirate radio station in Dublin has put up a prize of the equivalent of million Irish pounds to the first person to place a bicycle tyre over the top of the structure .