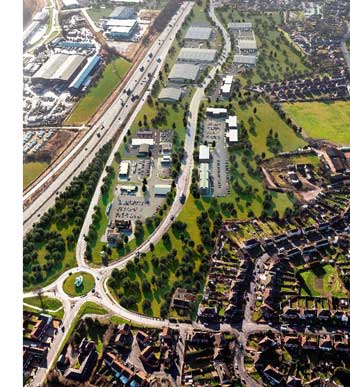 Distribution and logistics company Great Bear has contracted Bowmer & Kirkland to build its second distribution centre at Markham Vale near Chesterfield creating up to 400 jobs.

Caunton Engineering has been contracted to fabricate, supply and erect the steelwork for distribution centre.

The announcement comes four months after the firm got the keys to its first distribution centre, erected by Severfield, which is set to open next year.

To be overseen by developer Henry Boot, building work on the latest 44,500m² scheme is set to start in January and completed in June next year.

Great Bear Distribution Regional Operations Director Peter Yarwood said: “The deal agreed between Henry Boot Developments for a second distribution unit is evidence of the quality of space Markham Vale has to offer.

“Being located on the M1 corridor, the site fits our needs perfectly.

“Henry Boot Developments has already delivered a bespoke facility for us at the site and we are confident the second unit will allow us to further enhance our capacity to service the wider UK more effectively.”

“It shows great confidence in the site’s location and in Derbyshire as a place where businesses thrive and grow.

“We’re very proud of Markham’s progress to date − it’s now home to 40 businesses and has brought over 900 to jobs to the area so far.”