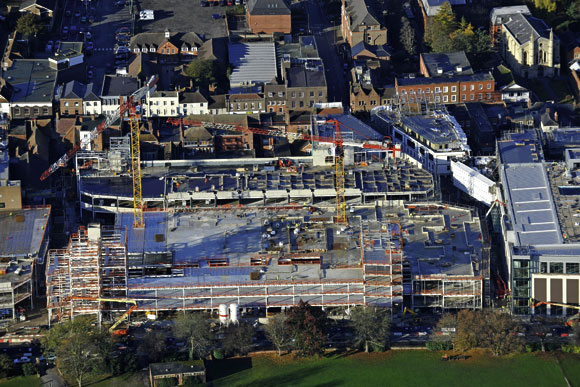 The Parkway retail and residential development represents the largest ever construction scheme in Newbury town centre. NSC reports on a project set to transform the Berkshire market town.

Known as Parkway, the scheme is being developed by Standard Life Investments assisted by the Shearer Property Group. They say it will meet the needs of an enlarged shopper population by creating a fresh and contemporary retail offer. The scheme will create a high quality setting for modern fashion and cosmopolitan eating. Its architecture is up-to-date and striking, but also sympathetic to the surrounding architectural heritage.

Bucking the trend which has seen very few new retail developments during the last few years, Parkway is scheduled to be ready for shoppers before Christmas 2011, while the residential portion of the project will be completed by May 2012. Consisting of eight blocks (A to H) the retail parts of the project are all steel framed. 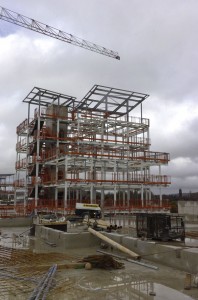 Making the scheme more aesthetically pleasing to the eye, a 734 space two level underground car park lies beneath the majority of the project’s footprint. On top of this the main two-storey retail development springs up off of a ground floor slab, and then above this, on a rooftop podium, there are 184 residential apartments and affordable houses focussed around a central landscaped piazza.

‘This was a neglected part of town hidden between Newbury’s main shopping thoroughfare – Northbrook Street – and Victoria Park,” explains Costain Construction Manager Mick Long. “When we started on site in October 2008 we began with two years of demolition and enabling works.”

Digging out the two-level 7m deep space for the car park was a major exercise and involved installing a series of secant piles around the project’s perimeter. This then enabled a large-scale dewatering programme to begin while the car park was excavated.

“The proximity of the River Kennet meant we were digging well below the local water table,” adds Mr Long. “While construction work continued we were continually pumping the site, with the tension piles installed and weight of the basement and superstructure in place we can now allow the on-site pumps to be gradually decommissioned.”

While the enabling works were being undertaken the steelwork for the entire project was procured at this early stage to secure materials and cost, and allow the steel erection programme to get an early start on the Debenhams store, as this structure’s footprint is one of the few parts of the project which is not above the car park. Once begun, the programme was accelerated by means of the integration of various trades, managed by Caunton, such as the laying of metal decking, fixing perimeter edge protection, installing precast concrete stairs and the provision of offsite fire protection.

Like all of the steel framed blocks, Debenhams (Block E) is a stand-alone building, but this structure is based around a larger bespoke grid pattern of 10.2m × 12m. At 5.5m high, Debenhams also features a slightly higher floor to ceiling height than the rest of the project.

Steelwork contractor Caunton Engineering erected this block installing temporary CHS bracing along with the main structural steelwork. The bracing remained in place until the steelwork erection was complete and the concrete floors were cast. Once the floors were installed they, in combination with the Block’s concrete lift cores, acted as a diaphragm.

“Caunton are ever mindful of the need for sustainability and the elimination of waste, so for example when we removed the temporary bracing from the Debenhams store it was returned to our facility in Moorgreen, Nottingham. We then reused it on the remainder of the project. Steelwork is of course in practice 100% recyclable,” says Phil Ratcliffe, Caunton Engineering Contracts Manager.

While the Debenhams store was being erected two other smaller blocks were also begun. Block D, which sits adjacent to Debenhams, and Block C, which is split into halves and straddles one of the main entrances to the development.

Once the car park was completed and the ground floor slab cast the remainder, and the bulk, of the steel erection began. Based around an H-shaped street configuration the project’s two biggest blocks sit within this shape. Marsh Lane and East Street form the uprights of the H and the aptly named Middle Street links them together. This part of the retail project is predominantly erected around a standard 8m x 8m grid pattern, chosen to match the car park column layout below.

“In this way we minimised transfer structures between the concrete car park and the steel framed retail zone,” says Ian Krailing, Cundall Project Engineer. “As this standard grid is suitable for both uses.” 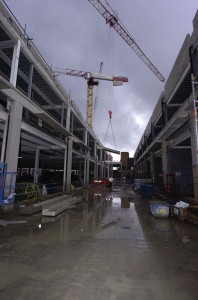 Middle Street links the other two thoroughfares within the development

The choice of a steel frame for the two levels of retail was down to speed, cost and flexibility. Once the car park and the ground level concrete slab were complete, the steel frame was erected relatively quickly via the site’s four tower cranes. Importantly the steel frame allows future tenants the flexibility to change the shop’s internal configuration.

Situated within the H-shape, Block F is the project’s largest structure and also fronts the development and overlooks the main thoroughfare of Parkway as well as the adjacent Victoria Park.

In order to maximise the views over the park, Block F’s main elevation has three mezzanine levels of apartments. This means the steel framed block has two-levels of retail over the majority of its footprint, while at the front the same height has been maximised with the incorporation of three floors of apartments. Above this, Block F then accommodates timber housing and apartments.

To highlight the development and to act as architectural landmarks along this main elevation, this block features two steel framed lift towers which also accommodate two or three apartments per level. One of these core towers is seven-storeys high and the other is five, and they were constructed with steel for ease of programme.

“Due to their height and bespoke arrangement on this project the towers were steel framed. This also enabled the towers to be erected at the same time as the main frame, and allowed the cladding to commence early,” says Mr Krailing.

Caunton had three erection gangs on site during its peak period, and this meant utilising all of the site’s tower cranes. While Block F was being erected, work also progressed on Block B, another large retail zone. Meanwhile, erection also began on Blocks A and G, two small retail zones which straddle a service yard; a yard which will not only be used by the Parkway scheme, but is also currently used by some existing adjacent stores.

This meant the entrance area had to be kept open during the day and a 16m long truss which spans the area, linking the two Blocks, had to be installed on a Sunday.

The final piece of the steelwork jigsaw was the erection of Block H, a small structure consisting of three kiosks, situated on the site of a former pub.

Summing up Costain Project Director David Woodhouse says he has been impressed with Caunton from its first involvement at tender right through to completion.

“Caunton has always been proactive on the project, we made our mind up to go with them when we submitted our tender and they have worked well with us all the way through”.

I am most impressed with their flexibility and ability to consistently achieve milestones. Other than the exhilarating speed that the steel frames have gone up at you would hardly know they were here.” 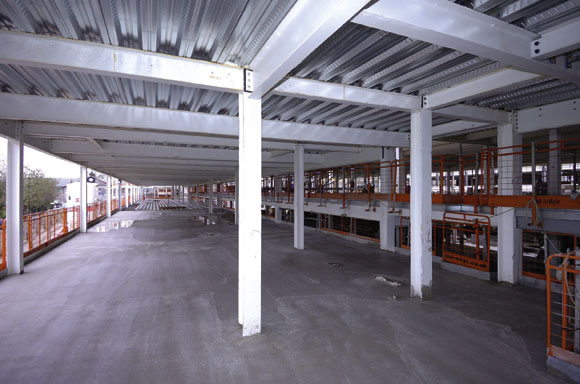