Posted on October 7, 2020 by NSC in Certificate of Merit, Projects and Features, SSDA Awards

Strengthened Edwardian steel columns along with the construction of a new rooftop structure, have helped enlarge one of Dublin’s most popular attractions.

In 2018, more than 1.7M tourists visited the Guinness Storehouse, to see how the famous Porter beer is brewed and learn about its history. At the end of their tour, all adults are given a complimentary pint that can be supped in the rooftop Gravity Bar, which is a disc-shaped glazed structure offering 360-degree views over Dublin. 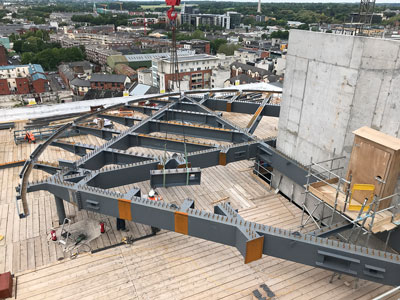 For the construction of the new gravity bar, a crash deck was erected by the main contractor, positioned 1m below the bottom level of the steelwork. This gave the steel erectors a working platform from which to work.

The main steel frame is supported on four CHS columns, which were supported from the existing structure. Before these new columns were installed, the existing Edwardian steel columns below were strengthened with stiffener plates.
The floor of the new bar structure is formed from a grillage of box girder beams and UB section infills.

All UB infills and several of the box girders were detailed with service penetrations to co-ordinate exactly with the M&E requirements. The downpipe from the roof was also integrated inside the CHS perimeter columns in several locations where required.

The perimeter of the building is formed from a curved PFC section, which was erected in discrete lengths and welded, with the welds ground flush, to produce one continuous member around the full bar.

In summary, the judges say this popular bar sits above Dublin’s most visited tourist attraction and the works were carried out with the building remaining operational throughout. The challenging installation forms an extension to an existing rooftop structure that sits above the 1904 ‘Protected’ building. The new bar is supported on four steel columns that connect through the roof to the strengthened, historic structure, below.