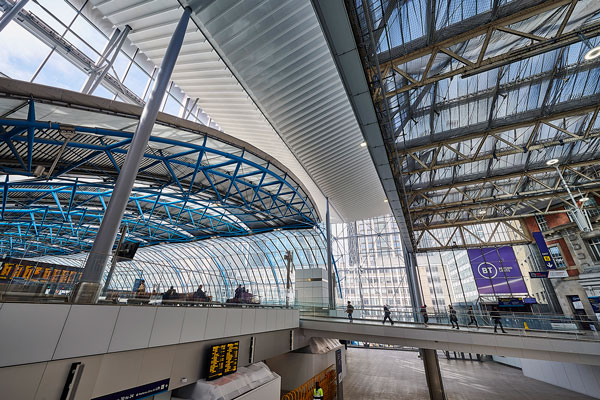 A roof structure, requiring a high degree of complex design work, bridges the gap between two existing structures at the UK’s busiest station to form a new covered concourse.

As part of this programme, an infill roof structure has been delivered, bridging the gap between the three-pin arch roof of the Grimshaw designed WIT terminal, and the trussed 1920s steel roofs forming the main station concourse.

The infill roof is a rectangular steel-framed box, 52m long by 18m wide and 26m-high at the western end, tapering along one side to accommodate the shape of the former Eurostar structure and over-sailing the two station roofs. Aside from the fact that the roof is supported at the eastern end by Waterloo’s 1840s-built masonry walls, the new structure is self-supporting.

According to the project team, the greatest challenge was developing a suitable foundation system to support the new structure. The footprint of the roof sits directly above four London Underground lines, in addition to two large escalator boxes and various access tunnels. 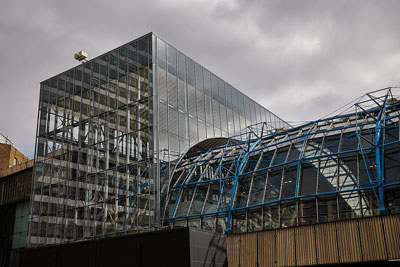 As a consequence, piled foundations were not an option, and structural concepts focused on opportunities to reuse existing support structures using load-balancing approaches wherever possible, supplemented by localised assessment or strengthening if necessary. A steel-framed solution became the only viable design for the project.

“The entire roof structure including glazing is only 400t,” says Wessex Capacity Alliance Engineering Manager, Chris Kitching. “But however light this may be, we still needed to work out where the loads could be transferred to and if we could free-up any capacity from the existing structures.”

The roof requires two 508mm-diameter circular hollow section (CHS) columns to support it in the middle.

As well as providing additional support to the roof, the CHS columns allow the structure to have a central area with a 26m clear span. However, as no new foundations can be installed in the central area, the CHS members are founded directly on top of the WIT platform slab.

Because of its propped cantilever design, the existing slab is subject to movement of up to plus or minus 35mm, so the columns are placed on bearings. The bearings accommodate these movements, which would otherwise crack the roof’s glazing. Forming the main span of the roof is a 4.2m-deep × 52m-long spine truss, weighing 27t.

The judges say, the major challenges for this infill roof included foundation conditions requiring the use of existing supports and restricted site access. The solution is a steel frame sympathetically designed to reflect the detailing of the existing structure, and ingeniously erected in a live station, facilitating a huge increase in station capacity.