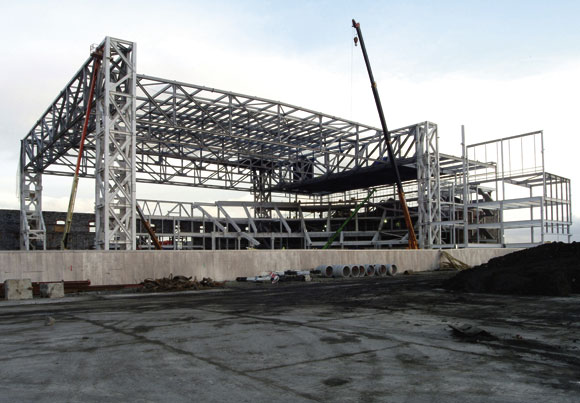 Four super columns and the linking trusses were initially erected, to form a structure resembling a table

A new world class arena in Dublin’s Docklands is being constructed from the shell of a former train shed. Martin Cooper reports on a project which has highlighted steelwork’s versatility and speed of construction.

It started life in 1878 as a train depot, serving Dublin’s busy port, and one hundred years later it was reborn as the city’s premier music venue, hosting everyone from U2 to Britney Spears and even the Eurovision Song Contest on three occasions in the mid 1990s.

Today the Point Depot, now renamed the O2 Dublin, is undergoing yet another transformation which will nearly double its capacity to 14,000 for concerts, and provide better front and back of house facilities to match any other international venue.

The O2 is located in Dublin’s Docklands, a fast-changing area, with many on-going construction projects, just a mile or so down the River Liffey from the city centre. Adjacent to the site is one one these large construction projects, the Point Village mixed use scheme (see NSC May 2008), which includes a new light rail terminus that will give concert goers easy access to the O2 venue and the surrounding shops.

With an array of new steel and glass buildings going up all around, what makes this project different from other nearby schemes, apart from its complexity, is the partially retained facade of the original train shed structure. Simon Penny, Buro Happold Associate and Project Leader, explains: “Three of the structure’s original brickwork walls have been kept, while a fourth was demolished, allowing a new steel framed interior to be inserted and the construction of a new and higher roof.”

Fitting the new auditorium inside the three retained historic walls meant the original configuration of stage and seating had to be twisted by 90 degrees to get the best fit. All of the retained walls had to be propped while the new steelwork was being erected, and these props were not removed until the new steelwork had been fully connected into the brickwork. 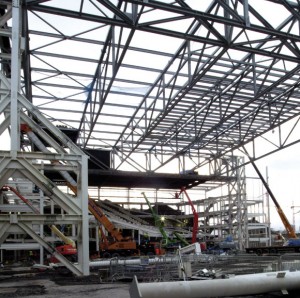 The structure has two tiers of seating 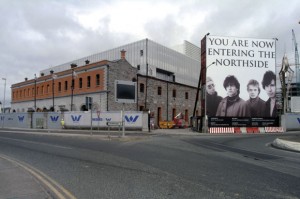 Nearing completion, the O2 Dublin will open in December 2008 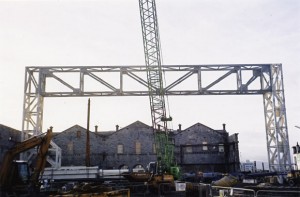 Each super column was erected in six segments 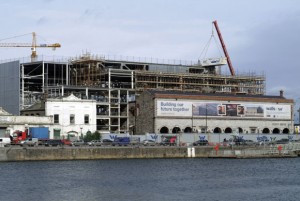 Behind the retained historic facade the new venue will have a 14,000 concert capacity

Steelwork contractor Walter Watson installed stainless steel rods and channels along the retained walls and the new steelwork was connected to this. Within the walls nine original cast iron columns and 17 wrought iron beams have also been retained and incorporated into the new design.

“This is one of the interesting features of the project,” says Mr Penny. “The way in which the modern steelwork has been combined with reused original wrought and cast iron beams and columns. This creates a modern venue which retains some of the heritage value of the original train shed.”

While preparatory works were underway the building’s original columns were all removed by Walter Watson and tested to make sure they were up to standard and had not suffered any damage over the years. All of the Victorian ironwork was found to be in good condition, and most have been reused in the new design.

“The old columns are all in new positions and we just had to add steel cruciforms to the tops to accept the new steelwork,” explains Trevor Irvine, Walter Watson General Manager Structural Division.

Early in the design stage, a steel frame was chosen for the new arena due to the complexities of the bowl’s geometry, the constrained site, the long auditorium spans and the programme advantages.

Because the site is tight, off site fabrication of the steelwork allowed the project to run two sites in parallel. The main project site was therefore clear for groundworks, piling and foundations to be completed, while the steel fabrication began at Walter Watson’s County Down facility, one month before steel erection began.

The first steelwork to be fabricated and erected were four ‘super columns’ which provide the overall lateral stability to the structure and contain risers and lift cores (stability is also provided by the arena’s rakers and braced bays around the structure’s perimeter). These columns have some huge loads passing through them, 6,500kN on some of their connections and approximately 14,200 tension control bolts were used on just these columns and roof trusses alone.

Each ‘super column’ is located in a corner of the building, and their early erection allowed the linking roof trusses to follow promptly, and then the early overall enclosure of the structure and the introduction of follow on trades.

The initial steelwork within the retained walls resembles a giant table, explains Mr Irvine. “The super columns are the legs and the trusses form the table top. Approximately 800t of steel went into this phase.”

The 27m high ‘super columns’ were brought to site in six pieces and assembled on site. The completed 100t columns were then lifted into position by two 350t capacity mobile cranes. Once positioned, a series of 54m long box and plane trusses were lifted into place linking the super columns. These 6.2m deep trusses provide the required 70m² of clear auditorium space needed to achieve the necessary improved sightlines.

“The roof steelwork was also suited to providing the additional flexible load capacity to allow event equipment to be supported in various configurations for future concerts,” adds Mr Penny.

As well as the ‘super columns’, all of the roof trusses were fabricated as complete pieces and then taken apart so they could be brought to site. “This was one of the biggest challenges of the project,” says Mr Irvine. “Working out the logistics of bringing such large steel sections to site and then re-assembling them.”

In total there are three 54m long box trusses, all 6m deep and made from box sections at the top and UC sections for the bottom, and one 50t proscenium truss which is the same length and connects to a series of shallower trusses over the slightly lower stage roof.

Once the ‘table’ had been erected, the interior steelwork for the bowl began. A steel ‘sandwich plate system’ installed by Intelligent Engineering was used for the lower tier steppings, as an innovative lightweight alternative to precast terracing. This system incorporates a transfer beam and provides better sightlines, as fewer supporting columns were needed. Above this there is a second tier of seating constructed with steel rakers and precast terracing.

Trusses crop up throughout the project and three more were needed to create a column free loading bay area on the ground floor. This bay needed to be 5m high to accommodate trucks, which is slightly higher than the regular floor to ceiling heights within the auditorium.

“We had to use Westok Ultra Shallow Floor Beams (USFBs) in this zone to level out the floor heights,” explains Mr Penny.

The new arena, which is scheduled to open in December, is a fine example of the advantages of steel construction, says Mr Penny. “It helped the main contractor achieve a challenging construction programme.”