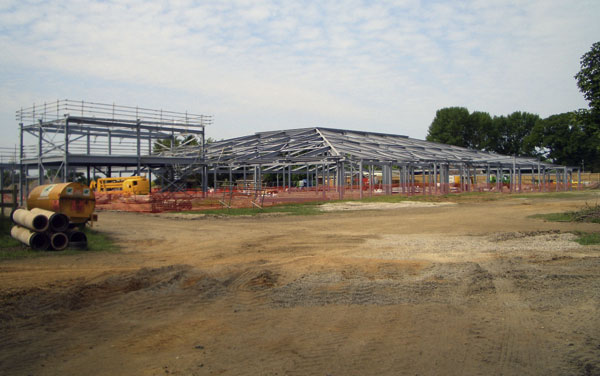 Phase one of the construction of a new visitor centre and attached animal enclosures at Twycross Zoo in Warwickshire has been completed by a project team including Adey Steel and Kier Marriott.

The initial works included the erection of a steel-framed single storey Visitor Welcome Centre to be known as Himalaya. This predominantly beam and column structure measures 72m by 42m and required approximately 200t of structural steelwork.

The building will include a 300 seat restaurant looking out onto a Himalayan mountain scene with resident snow leopards.

“The leopard enclosure forms part of our second phase of works,” explained Eric Gaunt, Contract Manager for Adey Steel. “The tension structure will be formed by tubular columns and restraint guys with stainless steel netting draped over it.”

On the opposite elevation another enclosure, housing a wetland aviary with wading birds, will be constructed in a similar manner.

The use of local, sustainable materials, ground source heating and landscaping to attract native biodiversity are fundamental to the job. The visitor centre will feature a pitched roof topped with sedum helping blend into its green environment.

Zoo Director Suzanne Boardman said: “We are really excited about the new centre. This is a major development and is one of a number of improvements to be completed to attract more visitors and support our bid to make Twycross Zoo the best zoological society in the world.”