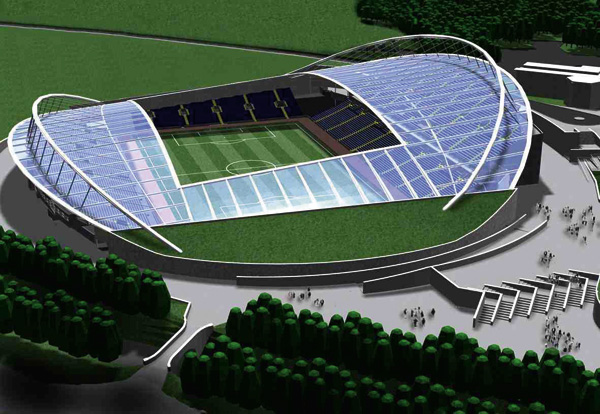 Located at Falmer on the outskirts of Brighton, the new 22,500 seat capacity stadium for Brighton & Hove Albion Football Club is rapidly taking shape and will be ready in time for the 2011-12 season.

Steelwork is currently being erected by Watson Steel Structures for the stadium’s east and south stands. During December a 170m-long arch truss will be erected enabling the roof of the east stand to be completed.

This truss will be delivered to site ‘piece small’, assembled on the pitch and then erected in three sections. It will be installed onto a pair of 20m high temporary trestles positioned on the stand’s terracing, together with heavily reinforced permanent thrust walls at each end of the truss.

While the roof truss remains on its temporary supports Watson Steel will infill the roof’s front and rear steelwork along with the underslung lighting gantries.

Next year work will begin on the north stand and the main west stand. However, prior to the construction of the west stand, main contractor Buckingham must demolish some old university buildings and excavate and remove a large chalk hill.

Another similar arch roof truss will span the west stand, although this truss will support a larger roof area. Temporary works along the east stand are only scheduled to be removed once the stadium’s entire roof has been erected in May 2010.