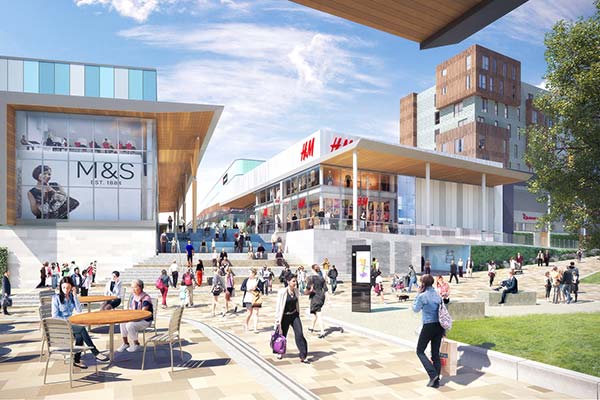 Construction is underway on a new retail quarter for Bracknell town centre which has been designed by BDP for Bracknell Regeneration Partnership, a joint venture between Legal & General and Schroders along with Bracknell Forest Council.

Known as The Lexicon, the scheme is a shopping and leisure destination that promises a vibrant mix of brands and experiences and a high quality mix of shops and leisure venues connected in a pedestrian-friendly environment.

BDP is lead consultant, architect and lighting designer for the six blocks that constitute the Northern Retail Quarter, while main contractor is Mace and Severfield is the steelwork contractor.

A spokesperson for BDP said five of the blocks are steel-framed and the material was chosen for its long span qualities and speed of construction.

The steel blocks consist of two department stores (Marks and Spencer, and Fenwicks), and three other retail units one of which incorporates a ten-screen cinema.

The project has been developed utilising a rich warm palette of materials including brick, timber, feature perforated aluminium, coloured glazing, gold/silver coloured copper cladding and green walls along with elegant street covers and canopies. A key concept for the scheme and public realm design has been ‘the greening of Bracknell’ to transform the character of the existing town.

The Lexicon is due to open in spring 2017. BDP has already completed a Waitrose supermarket in 2011, which forms one of the anchors for the scheme. Billington Structures erected the steel for the Waitrose store.