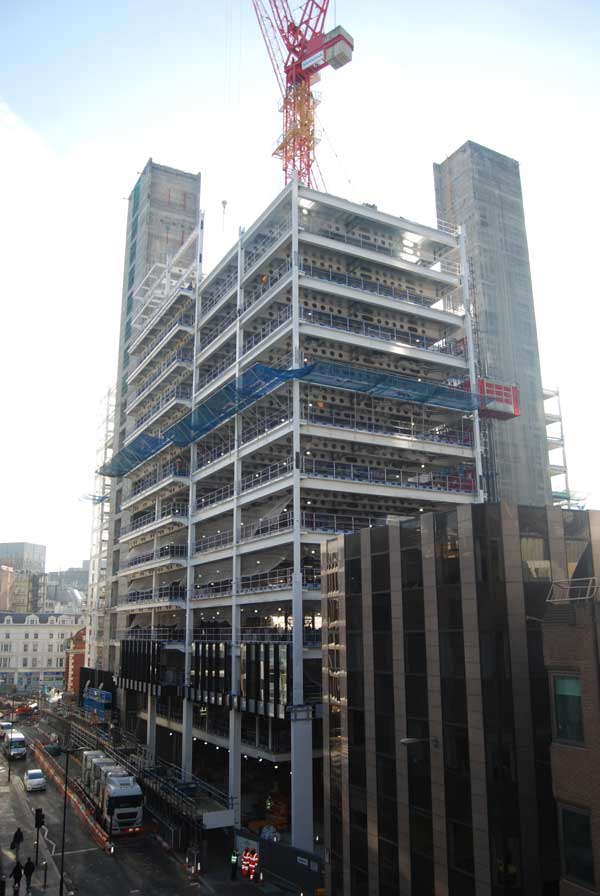 A steel-framed 19-storey office development is the latest high-rise addition to the City of London’s insurance district. Martin Cooper reports.

FACT FILE
Creechurch Place, London
Main client: Helical Bar/HOOPP
Architect: Sheppard Robson
Main contractor: Skanska
Structural engineer: Ramboll
Steelwork contractor: William Hare
Steel tonnage: 3,500tThe construction of new commercial office space in the City of London shows no sign of slowing down. An array of tower cranes on the City skyline is proof that a mini-building boom is in full swing and likely to continue into the near future.

Plans are afoot in the square mile for grander schemes, with one 73-storey development recently seeking planning permission. This kind of statement structure is far from the norm in London as the majority of new office developments are usually around 20 storeys high.

An example is Creechurch Place, a 19-storey T-shaped office development currently being built close to 30 St Mary Axe (The Gherkin) in an area of the City dubbed the insurance district because of the abundance of underwriters.

The site occupies an important position in the City of London and the aim is to deliver a new, modern, flexible and efficient office building of the highest quality. The construction will deliver a structure comprising two levels of basement, ground floor and 17 upper storeys, plus rooftop plant, providing 25,350m² of flexible, Grade A commercial office space and 284m² of retail/café space. 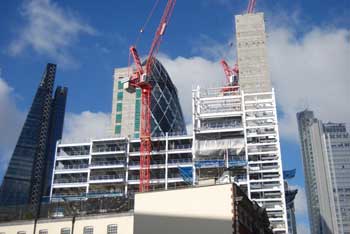 Creechurch Place rises up in front of three City landmarks 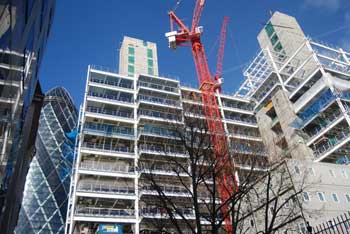 All of the steelwork has been erected by tower crane 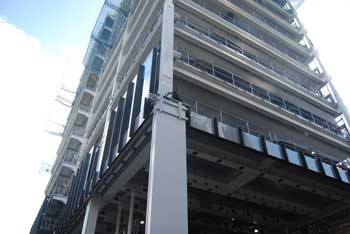 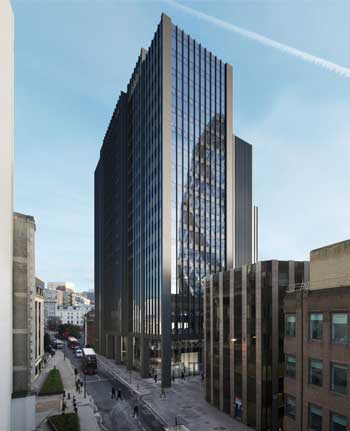 Below ground floor the structure’s basement is formed with a concrete frame within a perimeter secant piled wall. From ground floor slab upwards the building is steel-framed.

“The design for the majority of the tower was always a steel building as the material enables the structure to have long clear spans, which would not have been possible with concrete,” says Ramboll Project Engineer Rebecca Archer.

“The first floor along the main elevation is set-back and hung from the floor above via CHS sections, creating a column-free entrance area. This important design feature would also not have been possible in any other material than steel.”

Ground floor has a higher floor-to-ceiling height throughout, and as well as accommodating the building’s frontage and main entrance lobby along the top of the T-shape, the other part of this level has back-of-house and refuse collection areas.

Interestingly, the ground floor is the only part of the scheme that does not extend over the site’s entire footprint, as the top part of the T is split from the upright stem section because the building spans over a pedestrian thoroughfare. This walkway has been temporarily closed during the construction programme, but has to be reinstated as part of the scheme’s planning conditions.

Main contractor Skanska started on site in August 2014, following the completion of the demolition programme.

“One of our initial tasks was to deepen the existing basement by 12m to give us the required two underground levels,” says Skanska Project Director Paul Davies. “The concrete basement floors, ground floor slab and two slip-formed cores were then completed in readiness for the steelwork erection to begin last August.”

Steelwork contractor William Hare was involved in the design of the project early in the process and this helped improve efficiency.

“Not only was a value engineering process undertaken, but we also had the majority of the steelwork fabricated and painted ahead of programme, which eliminated the possibility of delays later in the construction sequence,” says Mr Davies.

The steel frame is based around a regular grid offering open-plan office space with column-free spans of up to 16.5m-long. Only two internal columns are present throughout the entire structure.

William Hare has installed Fabsec cellular beams throughout the majority of the structural frame to allow the building’s services to be accommodated within the structural void.

Despite the long spans, the use of cellular beams was not an issue for the floor vibrations. Ramboll used its experience of in situ testing to demonstrate that through careful consideration of the layout and interactions between the cellular beams, they could still be used efficiently, without having to adopt the more traditional method of using heavier beams to increase the stiffness.

“This would generally add weight and cost to a project,” says Ms Archer.

For the steel erection William Hare split the structure into four zones for its erection programme. This allowed two gangs to work their way up the building, two floors at a time, in a staggered methodology along with the metal decking installers.

“All of the steelwork has been erected by the site’s two tower cranes,” says William Hare Project Manager Ivo Garcia. “It’s all been within the tower crane’s lifting capacity, including the project’s heaviest members – two ground floor column sections each weighing 14t.”

The members are 1,350mm × 350mm box sections and they are larger than the other columns along the front elevation because they are unrestrained, positioned on corners and have been designed to absorb vehicle impact loadings. From second floor upwards the section sizes decrease.

The principal cladding system is a unitised, interactive double skin – a double-glazed inner layer, single-glazed outer layer and an operable blind in the cavity between.

This is said to allow control of solar gain and optimises natural daylight within the offices. Anodised aluminium vertical fins of varying colours and spacing, improving the façade performance and adding vertical emphasis, enhance this system.

The building will be completed in September and is aiming for a BREEAM ‘Excellent’ rating and a B-rated Energy Performance Certificate. 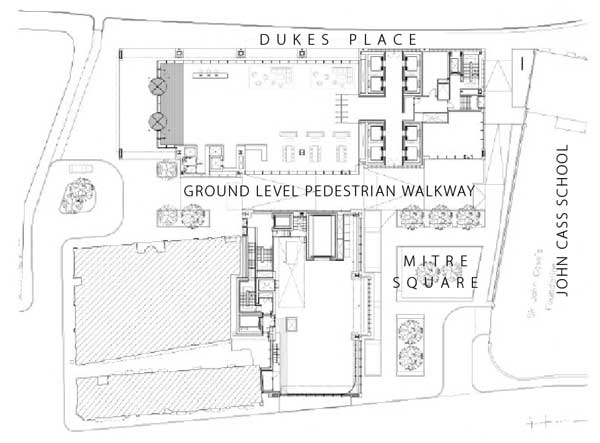 City centre construction projects always throw up logistical challenges and Creechurch Place is no exception. As the building occupies the entire site footprint there is little or no room for material storage, so steelwork is delivered to site on a just-in-time basis.

Along the main Dukes Place elevation the project has a pit lane that can accommodate two trucks for unloading.

None of the other elevations of the building are suitable for deliveries as they are either party walls, narrow roads or pedestrianized zones such as Mitre Square. However this means the neighbouring buildings, including the John Cass School are very close

“Keeping the neighbours happy is very important and we have a number of quiet times on site that correspond with the school’s playtimes,” explains Skanska Project Director Paul Davies. 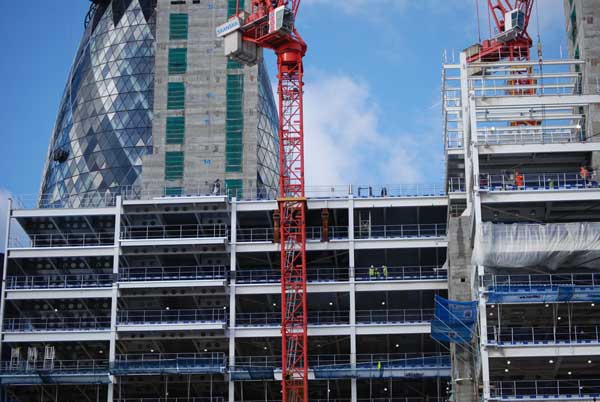 The office floors at Creechurch Place are largely column-free spaces because the narrow floor plates allow secondary beams to span across the full width of the floor. The composite Fabsec cellform beams at centres varying between 3m and 3.25m are 725mm deep and span up to 16.5m. Perimeter columns support primary beams spanning up to 10.5m that carry as many as three secondary beams. In some parts of the floors the secondary beams cantilever beyond the primaries.

The floor slabs are nominally 130mm thick normal weight concrete and consequently give better dynamic performance than would have been achieved with lightweight aggregate concrete. The higher mass of the floor slab results in lower accelerations for a given input force (such as footfall excitation) and therefore lower response factors. The effect on dynamic performance of the higher stiffness of the normal weight concrete is not significant.

Dynamic analysis of the floors was carried out using Robot structural analysis software to perform a modal analysis followed by a time history analysis with moving footfall input. Finally the response factors of the floors were determined and compared with acceptance criteria. Ramboll have found it an effective arrangement to introduce a line of tertiary beams spanning between the secondaries to reduce the tendency of secondary beams to vibrate on their own. The size and position of the tertiary beams along the span are adjusted iteratively to determine their most effective arrangement. This approach has been found to be 15% more efficient than achieving a satisfactory result merely by increasing the size of the secondary beams.

The damping ratios normally assumed in composite floor construction are 1% of critical damping for an as-constructed floor with no fit out, and 3% of critical for a fitted out office floor. (These values are recommended in SCI publication P354 Design of floors for vibration: a new approach). A lower damping ratio was used in the analysis of the Creechurch Place floors (with potentially higher responses) because in-service measurements by Ramboll have shown that for a number of lightweight fit out arrangements the actual damping ratio achieved was between 2% and 2.5% of critical, ie less than the value of 3% often used in analysis.

Full height internal partitions are known to affect the damping ratio in floors so where they are present in the fit out, 3% damping remains a reasonable upper-bound value.