Steel goes to top of the class in Manchester 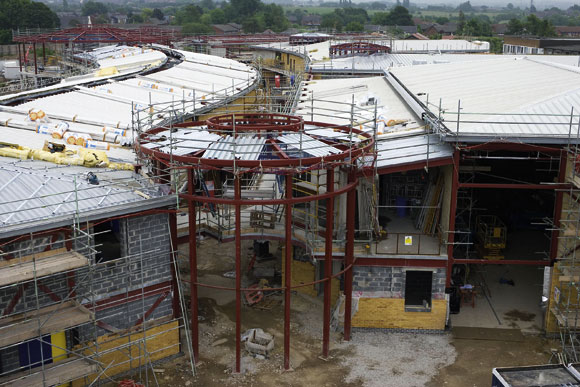 Improved construction time and a challenging roof slab meant steel was chosen as the predominant framing material for a new secondary school in Manchester. 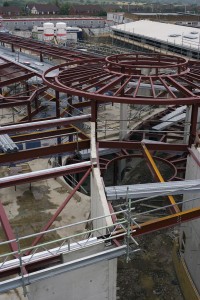 Construction work is currently under way on the new Failsworth Secondary School near Oldham
in Greater Manchester. The school is being built by Kier Build under a PFI agreement for client Academy Services and is a replacement facility for an existing school on the site.

As part of the overall contract Kier will demolish the old school once pupils have been transferred to the new establishment, while the Kier Group also has a 25-year maintenance agreement with the client.

The school buildings cover an area of approximately 8,200m2 and consist of one 130m- long main structure, four smaller blocks (which resemble fingers) and a semi independent sports hall at the eastern end of the structure.

Running the length of the main building is a covered street, off of which – at ground floor level and via a full-length perimeter balcony – access is gained to all of the school’s blocks. The street has a roof which is designed with a tubular frame supporting a clear ETFE cladding.

Geoffrey Taylor, Marketing Director for steelwork contractor Caunton Engineering, says the company has erected more than 600t of steel for the project. “Connection design has been key and carefully coordinated because of the interface with concrete shear walls and cores.”

All of the school buildings are two-storey high and have been constructed on a concrete slab. The upper levels and roof are entirely steel-framed, while the lower (ground) level is a mix of steel and concrete frame.

This means that concrete framing for the ground level extends along almost two-thirds of the main school building and for three of the connected ‘finger’ block structures. The remainder of the main block and two of the adjoining blocks will be built completely with structural steel.

This seemingly random mixture of concrete and steel was worked out as the best and most advantageous solution for a number of reasons and was made in conjunction with the contractor and architect. Structural engineers for the project Arup, says the ground floor is reinforced concrete to take advantage of an exposed soffit, perceived to be both visually appealing and also providing the benefit of the exposed thermal mass.

The flat slab solution also eliminated downstand edge beams, which helped with natural day-lighting and to some extent natural ventilation.

Meanwhile, the upper floor was preferred in steel to improve construction time, and the difficulty in achieving a curved, inclined concrete roof slab. The structure’s ceilings within the classrooms follow the inclined roof and are not flat, this is to allow light and ventilation from the roof plant wells.

“Erecting so much steelwork off of concrete meant we had to work closely with the concrete contractor and coordination was vital to a successful job,” says Mr Taylor. “The buildability of the connections and interfaces required us to supply cast-in plates alongside concrete pocket details.”

The majority of the school is basically a concrete podium with steel springing off to form the upper level and roof. One area, however which is all steel framed is one adjoining block which will contain a sports hall.

Known as Block D, the building measures 45m x 25m and includes a predominantly double height space for the sports hall with a few classrooms – on two levels – along one facade. 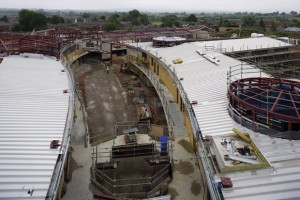 A covered street divides the school’s blocks and will run the length of the main building.

“There was a need for some long spans within Block D,” says Ben Watkins, Senior Structural Engineer for Arup. “The hall had to be column free internally and we have 18m wide spans. Steel lends itself to this type of construction.”

Between Block D and the main school building there is movement joint, but according to Mr Watkins it is nearly an independent structure as it is only linked to the rest of the school via a first floor balcony.

To form the roof over the sports hall, Caunton brought a number of 10m-long sections to site, bolted them together on the ground before lifting the complete 20m-long sections into place.

As well as the inter-material connections Mr Taylor says the school’s ever-changing grid pattern has added to the project’s complexity. “The main building has a wave-like in plan bend and this means all the classrooms have different sizes and shapes.”

Another interesting element of the school are the rotundas. There are four in total, one large 21m diameter rotunda forms the roof of the main entrance area, and three other smaller 8m diameter rotundas located along the covered street house helical staircases.

Again, the interfaces between the circular rotunda steelwork and the surrounding structural members required some in-depth design. “We had to make sure all members were correctly aligned and the vertical loads had to be correct,” comments Mr Watkins.

Caunton erected each of the rotunda structures with a series of individual rolled members, a combination of box sections and channels. The most eye-catching element of the project is the covered street. feel the tubular To give this central mall an outdoor frame, which forms the roof, is supported on CHS columns which in turn sit on top of the adjoining buildings. This will allow air to circulate into the street, while protecting it from the elements.

“The majority of the street’s roof members are bespoke tubular curved sections which fit the distinctive profile,” explains Mr Taylor. “There is approximately 90t of steel in the street roof.”

The new Failsworth School is scheduled to open in February 2008. Kier will then commence demolition of the old school buildings, converting the ground into new playing fields, and finishing the job in July of next year.