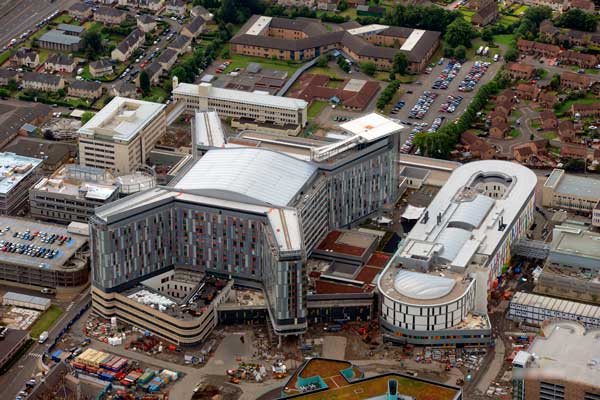 Scottish Galvanizers (part of the Wedge Group) has galvanized structural steel used to create a helideck at the new Southern General Hospital in Glasgow.

The new ‘super’ hospital is the first health facility in Scotland to have its own roof top landing pad offering quicker and more direct access to the emergency department.

Scottish Galvanizers were also contracted to galvanize steel for the helipad’s access ramps.

The 14 storey hospital is the location for one of four new trauma care units in Scotland, with the helipad enabling the hospital to admit air ambulance patients who require urgent emergency care.

Scottish Galvanizers Commercial Manager Paul Tait said: “It was a great privilege to be involved in the construction of the new Southern General Hospital which is a mammoth project not only for the region, but the country as a whole.

“Galvanizing the helipad seemed an obvious choice for protection against rust and corrosion, as not only is the structure exposed to the elements, but it will be subjected to an aggressive marine environment, as it’s in close proximity to the River Clyde.”

The client explained that it was paramount that the correct protective treatment for a long-life was applied and galvanizing was chosen by the design team as the optimum solution for long term protection and robustness during installation, to remove the need for follow up protective layers in what is a challenging location.