This model shows how the S.G.H.W. Nuclear Power Station complex will look when completed

An interesting project at present under construction at the U.K.A.E.A. Experimental Reactor Establishment, Winfrith Heath, Dorset, is a prototype steam generating heavy water moderated nuclear power reactor (S.G.H.W.) with an electrical output of 100Mw. This is a departure from the normal U.K. programme of nuclear power based on gas cooled graphite moderated reactors and fast reactors. Several large fast reactor power stations will probably be built from the middle of 1970 and onwards but, as the demand for nuclear power is increasing, it was considered desirable to study an alternative type of thermal reactor.

The decision to use a steel framework arose chiefly from the need to ensure maximum flexibility in design. The primary and secondary containment systems had not been evolved in detail at the outset of the project and the general plant layouts were unknown when the building was being designed. In addition, the use of steelwork permitted the maximum amount of fabrication to be done off site, this resulting in quicker erection of the framework and reduction of ‘on-site’ congestion of trades working within the confined space of the reactor area. 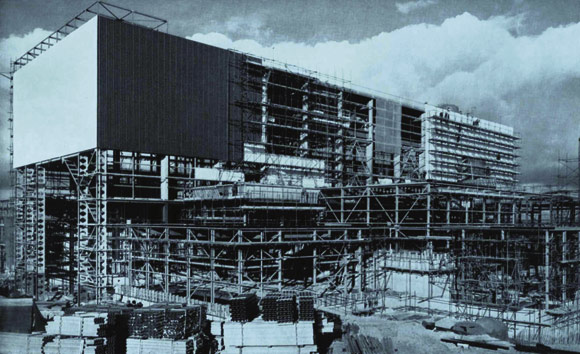