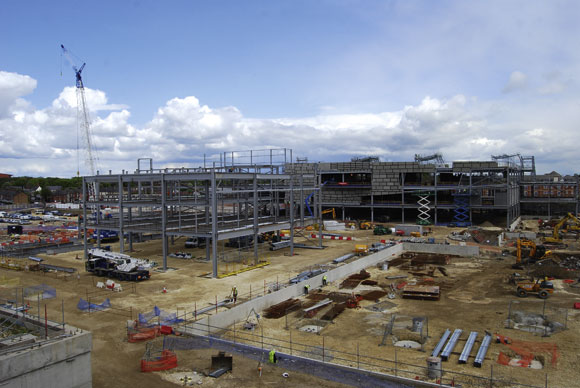 The Trinity Walk project will provide a welcome boost to Wakefield as well as forming an integral element of a much larger regeneration scheme for the West Yorkshire city.

One of the most high profile casualties of the recession in the retail property sector is back on track and scheduled for completion next Spring. Work on the 46,451m² Trinity Walk shopping centre in Wakefield restarted earlier this year, after nearly 12 months in which the city centre site stood half built. 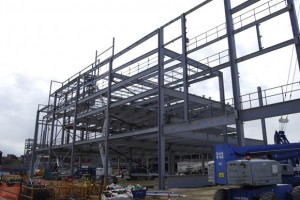 Retail units will be located along three levels

This is a prestigious project for Wakefield and forms part of a wider city centre regeneration programme, including a new covered market hall which Shepherd completed more than a year ago (see NSC April 2008).

“Wakefield has the potential to become a major regional shopping destination, and the first choice for regular shopping trips for those that live within the area,” says Nigel Moore, Shepherd Construction Project Leader. “Many people currently travel elsewhere for shopping, Trinity Walk will reverse that trend.”

Some of the major steelwork elements of the project were approaching completion when construction work ceased last year. Now the majority of the project’s original subcontractors are all back on site and steelwork erection is progressing towards a November completion date.

As with the majority of large retail developments, Trinity Walk is a steel framed scheme because of its speed of construction. The project consists of three main retail structures and a further two smaller buildings which will accommodate retail on the lowest levels with offices above in one structure and a library in the other.

Each of the buildings are structurally independent, but are all linked by a T-shaped ETFE covered mall. The largest structure (Block A) and the project’s main anchor, houses a Sainsbury’s supermarket on the ground floor with Debenhams on the two levels above.

An adjacent car park will offer approximately 1,000 spaces on two levels as well as direct access from the town’s ring road. Because the site is sloping, Sainsbury’s actually occupies a level below the main retail mall area. However, as the site stretches westwards, this basement level ceases and the mall connects into the existing nearby thoroughfares at street level. Overall approximately 80% of the mall is suspended above retail zones and a large service yard. 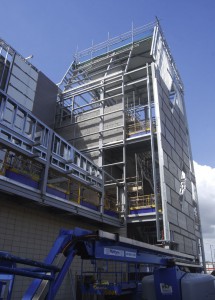 Steelwork, including large plated beams, has been erected around an open plan 20m x 16m grid pattern for the majority of Block A. The exception being some upper levels in Debenhams which house plant areas, and here the grid was broken down to a 16m x 16m pattern.

“The need for long spans as well as flexibility were two of the main reasons for choosing a steel frame solution,” explains Richard Osbond, BWB Consulting Business Unit Director.

Flexibility has been designed into retail Block C, as an eight-storey residential block could be added to the top of the structure in the future.

“This isn’t on the cards at present, but the foundations have been installed to accept it and the potential extra levels have been designed into the steelwork,” adds Mr Osbond.

The grid then slightly decreases to a 10m x 8m for the other two retail blocks (B and C) and this was to maximise the available space for tenants not needing the large expansive areas of the anchor stores. For ease of fabrication as well as to give the scheme a degree of continuity the remaining structures (D & E) are also based around a 10m x 8m grid.

With little need for large stairwells and lifts, as the majority of the circulation will be in the mall, the steel frames get their stability not from cores, but from moment frames mostly positioned along shop fronts. Large fabricated plated beams help spread the loads, especially around the larger grid patterns.

“There are some large beams and columns on this project, with many of the beams up to 2m deep,” comments Steve Duffield, William Hare UK Operations Manager. “Each of the five blocks have a similar grid pattern, but each structure’s steelwork differs due to different load paths and structural requirements.”

The use of steel has also allowed easier modifications to the design to take place. The original scheme although mostly the same as the present one, envisaged an open mall. Since work has been restarted, this has been altered to an ETFE covering supported on 10m wide trusses which in turn are supported off of the main steel frame.

Steelwork contractor William Hare has had to redesign many of the shear connections along the mall, while the mall itself has been narrowed from an original 20m width.

Wakefield Trinity Walk is scheduled to open in time for Easter 2011. 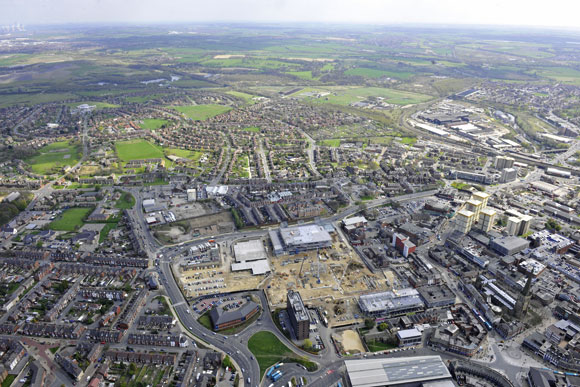 As well as constructing Wakefield’s Trinity Walk shopping centre, Shepherd Construction also completed a new covered market hall in 2008. The old market hall, which stood on part of the Trinity Walk site, was then demolished along with a number of former industrial units to clear an area for the new shopping centre. The town’s ring road originally bisected the site and so Shepherd also had to construct a new road to bypass the northern part of the project. Preliminary work began on site during August 2006 and also included re-routing sewers and remediation, as a large portion of the area was originally occupied by a gas works.