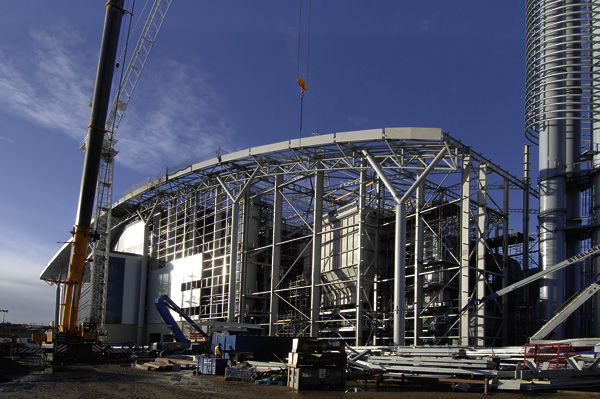 A recent BCSA hosted seminar on nuclear and renewable power generation projects stressed the importance of these markets to the steel construction industry.

The seminar was chaired by BCSA President Jack Sanderson and was made possible by the assistance of the Department for Business, Innovation and Skills; Department for Energy and Climate Change (DECC), and the Nuclear Industry Association (NIA).

The seminar was told that in 2008 the NIA produced a report for the Government outlining that approximately 80% of nuclear new build is not nuclear, but is similar to other major construction projects.

This means steel packages are part of the civil works and include an estimated 15,000t  of steelwork for each of the 10 new proposed nuclear plants. The containment vessels are substantial steel structures made from 44mm plate, with a total weight of 3,500t, and made up of modules of up to 900t each.

The Government Department of Energy and Climate Change (DECC) has set targets to achieve a 34% cut in greenhouse gas emissions by 2020.  The UK will also cut emissions by 80% by 2050.

Meeting the UK renewables target will need a capital investment of approximately £100bn, with a substantial part of the target to be met with offshore wind. Approximately 22GW of power is needed by 2020 to meet UK EU commitments and this could create 80,000 new jobs. Each offshore wind turbine could include up to 250t of steelwork with the jacket and foundations containing a further 750t. This equates to 6 million tonnes of steel to be used by 2020 which could be worth £20bn to the industry.

Delegates at the seminar were also told that other energy providers could also require significant structural steelwork, such as energy from waste, which could require 100,000t of steel over a six year period.

DEFRA has an aspiration for 1,000 anaerobic digestion farms with each containing about 500t of steel which could result in 220,000t of steel being used by 2020. Wave and tidal technologies are still emerging and could result in significant infrastructure projects.