Port Eglinton Viaduct on the move 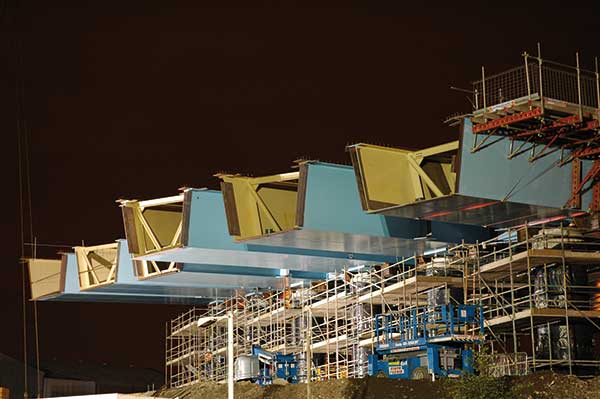 The largest of four steel structures on Glasgow’s M74 Completion project has begun to be erected by steelwork contractor Cleveland Bridge. Known as the Port Eglinton Viaduct, the structure consists of 12 spans, five of which were erected during September and November.

Approximately 14,500t of steel will used on the viaduct which will carry the new M74 motorway extension across the West Coast Mainline, the SPT Underground tunnels near West Street Station, the Paisley, and City & Union rail lines, and Eglinton Street, one of the busiest roads into Glasgow city centre.

Box girders for the viaduct are being assembled close to the erection points at designated assembly yards. For the spans already erected, 30 girders were pre-assembled into 50m to 70m long sections, each weighing up to 200t, and each requiring one individual lift to position it during night time rail and road possessions.

Early this year the longest span of the viaduct, a 200m-long pre-assembled section, complete with concrete deck, will be launched over the West Coast Mainline during successive night time rail possessions.