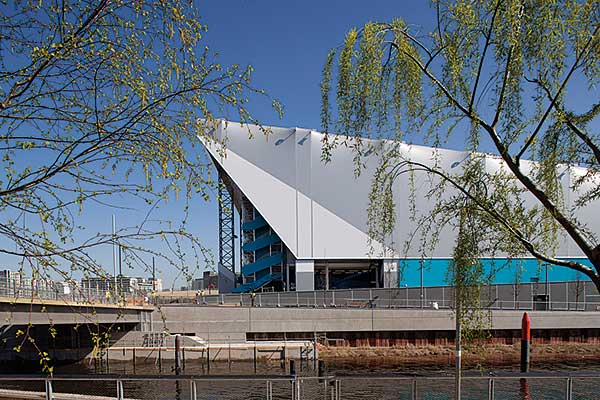 One of the final pieces of the London 2012 Olympic Park – the Water Polo Arena – has been completed and will begin to host test events during May.

The temporary arena has a 5,000 seat capacity and was built in just 13 months. Firms from across the UK constructed the venue, with the steel frame being fabricated, supplied and erected by Caunton Engineering.

The venue is covered by a silver-coloured wrap and an inflatable roof, made from recyclable plastic. Within its interior, it holds almost three million litres of water in the warm up and competition pools.

Located adjacent to the Aquatics Centre, the wedge shaped structure will be dismantled after the Olympics with elements reused elsewhere in the UK, including incorporating materials available through the rental market to promote reuse and reduce construction waste.

Dennis Hone, Chief Executive of the Olympic Delivery Authority (ODA) said: “Completing the construction of the Water Polo Arena marks the end of the ODA’s major venue work on the Olympic Park. That we’ve been able to do it using the combined expertise of companies from across the UK shows how British businesses can rise to the challenge of meeting the ultimate deadline – and exceed expectations. The unique sloping roof design makes it instantly recognisable and, as with all our venues, huge efforts have gone into both sustainability and ensuring we don’t build venues that have no use after the Games.”