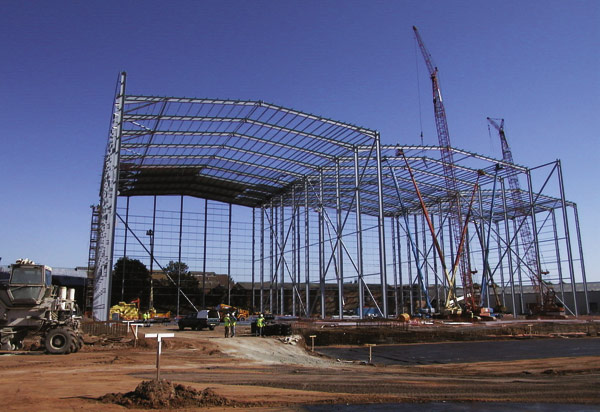 Atlas Ward operates mainly in the warehouse market, typified by this 158,000 sq ft project for Europackaging in Yardley

Severfield-Rowen has created a new force in the constructional steelwork sector with the acquisition of Atlas Ward.

Severfield-Rowen has agreed with Atlas Ward major shareholder the Bank of Scotland to buy the entire issued share capital of the company for £1.21M cash and the deal went through on 22 March, with completion to take place within four weeks.

Atlas, based at Sherburn near Scarborough in Yorkshire, designs, fabricates and erects structural steelwork principally for the distribution warehouse market. Severfield-Rowen says its new acquisition has a business, skill base and client profile which is complementary to its own.

Atlas is a major player in the UK market and is a well known brand name within the industry. In the year ended 31 December 2004 Atlas had an unaudited turnover of approximately £35M with an estimated pre-tax profit for that year of £250,000 resulting in unaudited net assets of £1M.

Severfield-Rowen Chairman Peter Levine said: “With a good name in the industry and with a complementary market place, client base, skill base and location, as well as potentially significant synergies, this is a very positive acquisition for Severfield-Rowen.

“Atlas, a well respected name in our industry, operates primarily in the distribution warehouse market. It complements the Group’s sectors of interest and has an extensive client base and a very experienced and skilled workforce.

“Atlas will benefit from our Group’s commercial and financial strength and, as we integrate it with the Group in due course, we expect to make focused capital investment to upgrade technology and improve productivity and efficiency which are the hallmarks of Severfield-Rowen.

“Initial client reaction has been extremely favourable to the acquisition and to the anticipated investment in the Atlas business.”