Developing a single-source 3D/4D project model of all project information allowed the Symonds Structures’ design team to manage the interfaces between new and old works at Wimbledon Centre Court. Initially, they planned the phasing of construction of a new retractable roof between major championships, and then reviewed its analysis, design and CAD strategies.

Symonds Group Ltd, recently acquired by Capita plc, are structural engineers, acousticians and transport planners on the future developments at the All England Lawn Tennis and Croquet Club at Wimbledon. The key element of the current work – the redevelopment of the Centre Court including a new retractable roof – has been developed, almost entirely, using 3D and 4D modelling techniques. This has been done in partnership with designers Bianchi Morely and CAD consultants Symonds IT Consultancy.

DESIGNING IN 3D
The structural design of this project was led by Director John Westmuckett who, as a part of his design activities, regularly develops his own 3D CAD models. Due to the complex nature of this structure – both existing and new – 3D-based design methods were absolutely necessary. The approach adopted was one of preparation of ‘sketch’ models, initially exploring design options based upon sound engineering judgement. These models were then worked into ‘scheme’ models – fuller renditions of a design solution that allowed production of basic drawings and linking to analysis and design systems. As the design progressed a ‘detail’ model was developed that was appropriate for production of traditional 2D CAD information and also available for detailed design co-ordination with other disciplines. 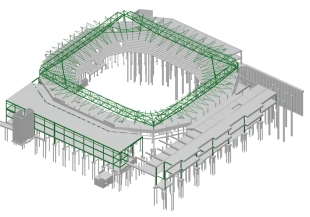 WHOLE BUILDING MODEL 1921-2004
In order to understand the complex overlapping nature of these structures, both above and below ground, each phase of construction of the existing building, from 1921 to 1990, was modelled as if new. This model allowed the historical drawings of the structures to be consolidated into one set of information and helped to identify where there was less detailed information available. This enabled on-site surveys to be more focussed and minimised disruption. To examine and test the accuracy of our model of the existing building, we obtained an historical image of the building from 1921 and established a similar view of the model that was almost a perfect match.

A separate model of the new fixed and moving roof structures was created, linked to structural analysis and design systems. The initial intention was to integrate the analysis and design model with the CAD model, however, the systems being used were not well suited to the initial establishment and subsequent management of such links. This led us to review our supplier.

This full asset model is now used as a singlepoint source of all existing data to support understanding and co-ordination of the interface between new and old structures, as well as coordination with other design-team model information such as those from the M&E consultant.

Fig. 2. The current design, including roof without coverings.

ROOF MECHANISM
The retractable roof mechanism was fully designed in 3D, using both virtual and physical models. The virtual models were used to develop a thorough understanding of the geometric requirements, both when stationary and during operation. This approach allowed the designers to explore concept solutions in precise detail without requiring expensive mock-ups at this stage of the process. Typically, a concept sketch would be provided to the modeller who would then work up options on that scheme for review and flag up issues such as clashes during closure. Initial schemes developed ‘in isolation’ were checked with the overall model of the surrounding roof to identify co-ordination issues. Fabric ‘closure panels’ between roof trusses and the mechanisms for opening the trusses were modelled in order to establish folding patterns and clearances. Using 3D and 4D models helped us to identify a significant number of issues not evident in the traditional media and design management processes.

Fig. 3. The analysis & design model of the new roof structure.

CONSTRUCTION SEQUENCING
As the work has to take place after the end of one summer championship and before the start of the next, the project is planned in stages. Each stage is a complex operation of enabling works, new construction and then temporary site closure. The design and planning of this process is being developed using the full 4D capabilities of the project model that may then be used to brief works contractors and event managers. The impact of staged installation of structural elements has led to the additional analysis of those members for ‘locked-in’ forces arising from the member forces and deflections developed in the temporary condition. The requirement to design for these forces necessitated the use of further, more specialised software. 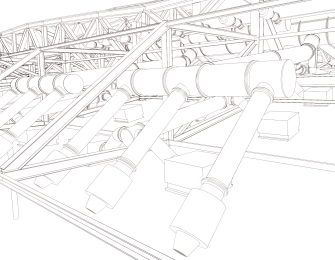 INTEGRATING ANALYSIS, DESIGN AND CAD
Whilst the Wimbledon Centre Court project is currently submitted for planning approval, the work to date has provided Symonds with much experience in 3D-based methods that has fundamentally informed our strategy for analysis, design and CAD. After going through a formal process of user requirements specification, tendering and interviewing short-listed suppliers, we have recently established a ‘strategic partnership’ with CSC Ltd.

In response to an ever increasing diversity of systems and the continuing lack of interoperability between them, it was felt that a ‘single platform approach’ offered a number of tangible benefits that would:

It was also felt that the relationship between ourselves and our supplier could usefully influence the direction of software development and support to ensure that project-specific use of the supplier’s systems was optimised. Although it is not envisaged that a fully integrated approach would always be appropriate, we have now established a long-term strategy that will allow us to develop skills in this area on projects as the opportunities arise.

CONCLUSION
As is often the case, this large, high-profile project has provided the catalyst for major process improvement. Whilst such projects can often suffer “technology-shock”, a combination of championing by senior management and support from specialist CAD consultants has led to many direct benefits on the Wimbledon project to date. By partnering with CSC, Symonds is committing to a future where designing in 3D is a core activity, not an optional extra.