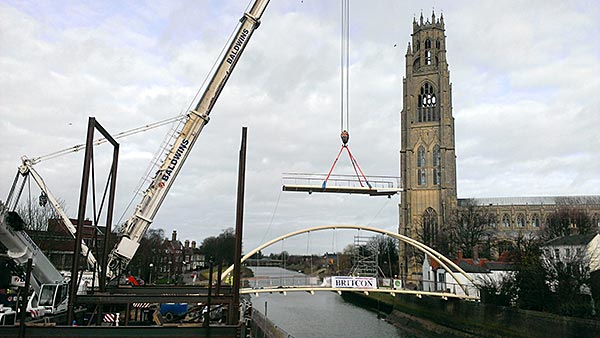 The bridge was assembled alongside the river and the majority of the finishes, such as handrails, were also installed prior to the lifting procedure.

The 65m long bridge weighed approximately 54t and was lifted into position by a 1,000t capacity mobile crane positioned on the riverbank adjacent to the assembly yard.

Main contractor for the project was Britcon. The bridge features a contemporary bowstring design that was chosen following extensive consultation with the public.

Andy Newell, Project Manager at Britcon, said, “We hosted a number of workshops to finalise the design details and resolve the many issues of building a bridge on such a confined site. The new structure is wider than the existing bridge and has an elliptical deck allowing people to admire the nearby Boston Stump without obstructing the crossing.

“Key features include a non-slip surface and improved access for pedestrians, wheelchair users, dismounted cyclists, pushchairs and mobility scooters. The bridge also colour matches the yellow lighting of the octagonal lantern in the church tower, which is believed to have been used as a marker to guide travellers on land and sea. There is also a tri floral motif installed into the parapet which will replicate the nearby Town Bridge.”