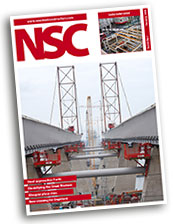 The largest civil engineering project in Scotland for a generation – the Forth Replacement Crossing – features in the latest issue of New Steel Construction which is now available online at www.newsteelconstruction.com

As well as the usual news pages and a technical feature and advisory desk notes from the SCI, the issue contains five project feature articles.

The 545m-long southern viaduct steelwork was completed in December (2014) and attention has now switched to the north shore with the northern structure scheduled to be finished later this summer.

Other features include a new bridge spanning Deptford Creek in south London that has been been opened as part of a large riverside residential development.

The development had to increase public access along the Thames riverfront without hindering waterborne traffic entering the creek and a cable-stayed steel swing bridge was the solution as it can be swung open by 100 degrees.

Steel construction is playing a leading role in aiding Innovia Films, one of Cumbria’s leading employers, to expand its manufacturing facility.

The company is currently undertaking £20M investment programme that includes a new steel framed extension which is being built without any interference to the adjacent production processes.

One of the buildings at 14-22 Regent Street will feature a retained façade, allowing the new structure to fit seamlessly into its historic streetscape.

The second building at 52-56 Haymarket has a slightly smaller footprint but will be highlighted by an aesthetic curved cladding incorporating glass, Portland Stone and horizontal metal detailing in response to the surroundings.

A number of high profile schemes are currently underway in Scotland’s largest city including St Vincent Plaza a striking and efficient building that will provide 15,700m2 of Grade A office space spread over 11 floors.