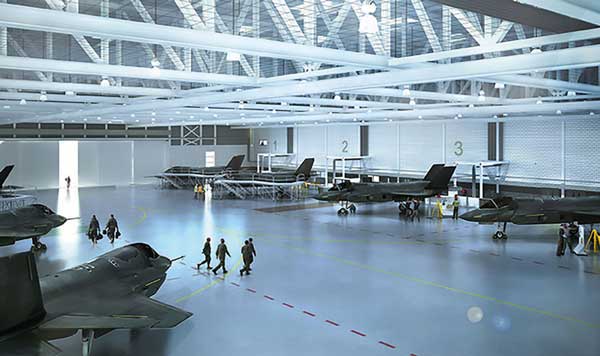 An £82M contract has been signed between BAE Systems and Balfour Beatty to build aircraft engineering facilities at RAF Marham in Norfolk for the UK’s first F-35 Lightning II fighter jets.

Work is expected to begin at RAF Marham this month, with the project team constructing three facilities to support the operation of the F-35 fleet; a maintenance and finish hangar, a logistics operations centre and an integrated training centre.

Steel construction will play a significant role in the works that are scheduled to be completed by early 2018.

“The contract also underlines BAE Systems’ continued involvement with the F-35 Lightning II programme and our company’s credentials in providing infrastructure for the UK’s military aircraft operations. We have a proven pedigree in delivering maintenance and support to the Royal Air Force fast jet fleets at bases throughout the UK, including RAF Marham where we have been supporting the operation of the Tornado GR4 fleet for the last decade.”

Dean Banks, Balfour Beatty managing director UK construction services, said: “We are committed to making this exciting development a success and extending the excellent track record BAE Systems and Balfour Beatty have for delivering defence projects in the UK.

“Our proven expertise in defence and aviation means that we have developed technically advanced delivery solutions that will help to ensure that RAF Marham’s operational capability is maintained throughout our construction activities on base.”