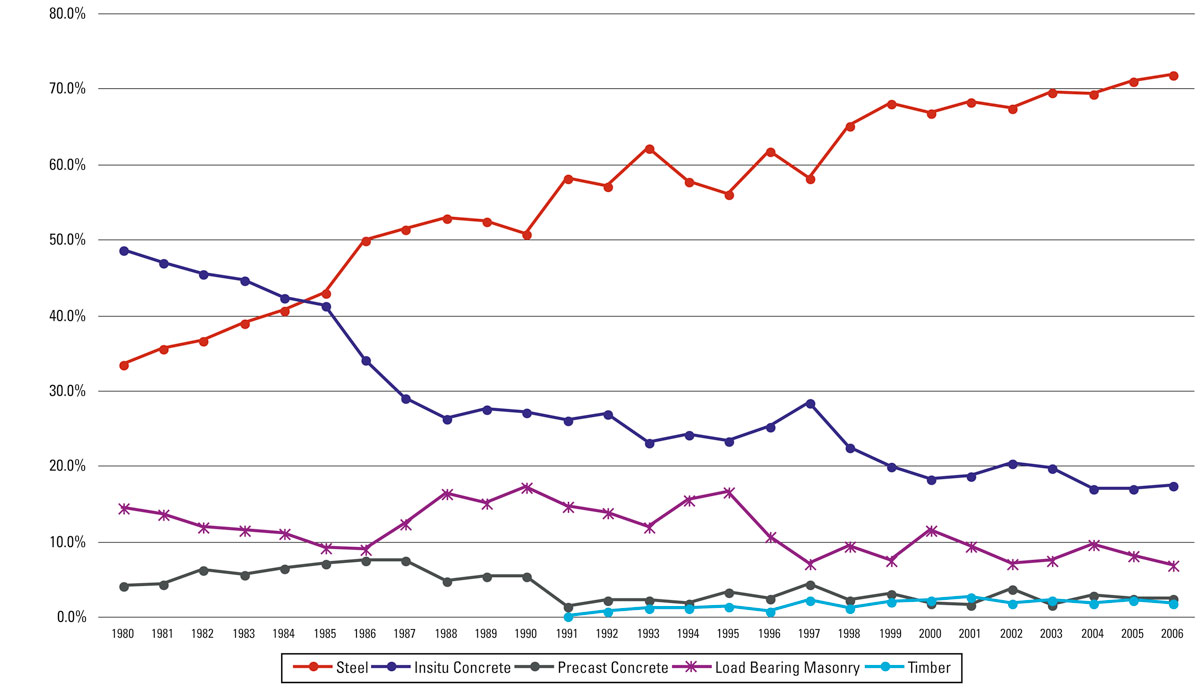 Steel has broken the 2005 record share of the multi storey non-residential building frames market, with a 71.8% share in 2006 of a market that rose by 3.7%, according to the latest Market Shares Survey from Corus.

The figures produced by independent market researchers Construction Markets confirm steel as overwhelmingly the material of choice of architects and structural engineers for building frames. The Construction Markets figures show that the market rose to 13.74M sq m in 2006, the highest since the record breaking 13.8 in 1988.

In the key offices market, which grew 9.5% in 2006 and industry forecasts say will be a growth area for some years to come, steel has increased its dominance with a rise in market share to a record 73%, from 71.9% in 2005.

This is the 26th in a series of surveys undertaken by Construction Markets. Steel’s market share for multi storey frames has risen from 33% during that time. Behind the dramatic success lies a story of improved productivity across the constructional steelwork sector that has seen massive investments made by Corus and steelwork contractors.

One of the marked features of the UK economy in recent years has been the huge investment made by retailers and logistical companies in building ‘sheds’, a market which grew substantially in 2006 and in which increasingly sophisticated and large structures are being built. Steel’s share of this market grew to 89.5% in 2006, from 89% the year before.

Corus General Manager Alan Todd said the survey sets the record straight after misleading claims made during 2006 that concrete was increasing its share of markets. ‘What this independent survey confirms is that the overall market rose during 2006, and some concrete suppliers no doubt saw their order books rise. Proper interpretation of the statistics though shows that they have not captured market share from steel, which is continuing to increase its market share in targeted sectors like healthcare and education.’

Mr Todd predicts that increasing recognition of the sustainability benefits of steel will continue to drive its penetration of key markets. ‘Clients are getting more sophisticated in their analysis of sustainability claims made for various materials, and are increasingly finding that steel is difficult to beat when the combination of environmental, social and commercial aspects of sustainability are fully considered.