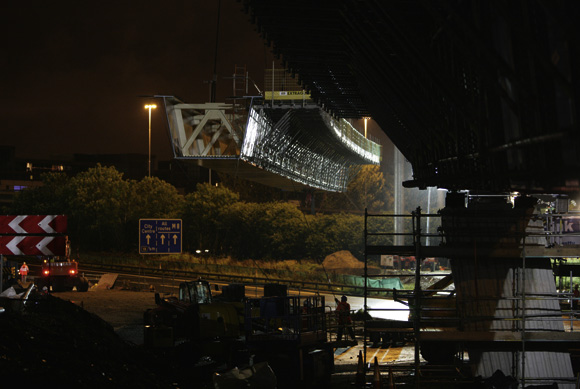 Glasgow’s M74 Completion project includes four major steel bridges along its route. Martin Cooper reports from a motorway extension which is relying on steel for all of its long span structures.

Just south of Glasgow city centre across the River Clyde a new five mile stretch of the M74 is being constructed. The road will not only provide a major national economic boost by completing the city’s missing inner city motorway link, but also breathe new life into a previously deprived area.

Known as the M74 Completion, the new six lane motorway begins at the Fullarton Road Junction (where the M74 currently terminates) in the east of Glasgow and then continues west to link up with the M8 motorway west of the Kingston Bridge.

The project – funded by Government agency Transport Scotland with Glasgow City Council, South Lanarkshire Council and Renfrewshire Council – is part of the Scottish Government’s massive infrastructure investment in Scotland’s transport network which will bring new jobs to the region as well as helping with the regeneration of Glasgow, Rutherglen and Cambuslang. The M74 also plays a key role in the transport plan for Scotland’s delivery of the Commonwealth Games in Glasgow 2014. 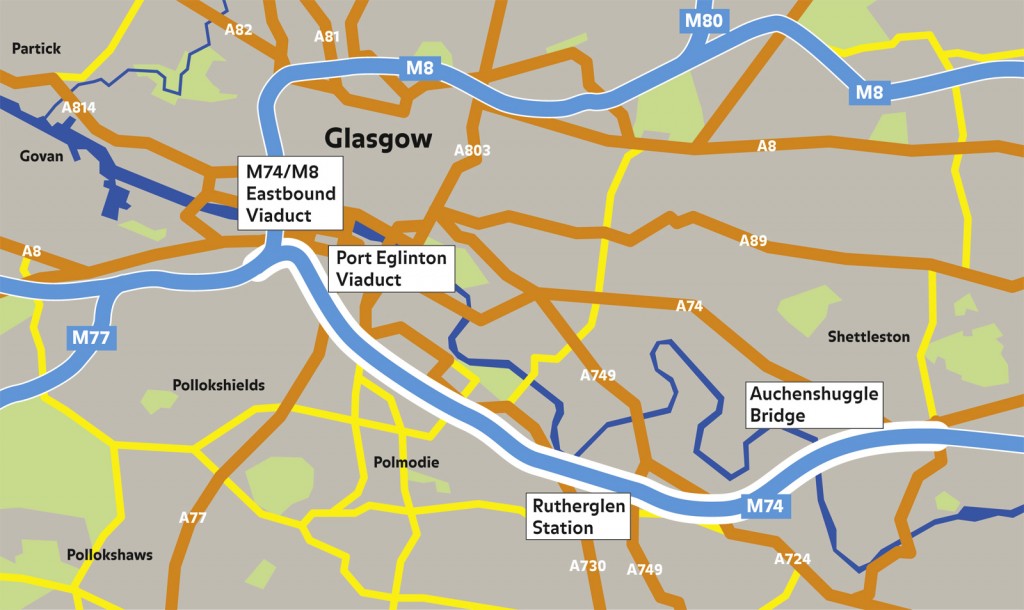 Construction work began in May 2008 and is scheduled for completion in 2011. The works contract was awarded to the Interlink M74 Joint Venture in early March 2008 for a fixed price of just under £445M.

One of the main challenges associated with the project is routing the motorway through the southern part of the city and as a consequence a number of businesses and factories have had to be relocated.

Another challenge is the number of roads and railways the route has to either go over or under. This accounts for the number of bridges – 14 in total, underpasses and deep embankments which have to be completed along the route.

“We are erecting bridges over some of Scotland’s busiest roads and in the case of the West Coast Main Line, one of the UK’s busiest railway lines,” explains Stephen Osborne, Project Manager for Cleveland Bridge. “Our aim is not just to build and erect these bridges but also cause as little disruption to these vital transport links as possible. By using steel we are able to erect the bridges, along with the necessary formwork and edge protection, overnight and quickly.”

Working on behalf of the Interlink JV, Cleveland Bridge has been contracted to construct the four main bridges for the project, which consist from west to east, the 232m-long M8 Eastbound Link Bridge, the 750m-long Port Eglinton Viaduct, the 186m-long Rutherglen Station Bridge and the Auchenshuggle Bridge across the River Clyde which will be 90m long.

The first bridge to be erected along the route was the M8 Eastbound Link Bridge which went up during August. This steel composite structure will connect the M8’s Eastbound carriageways to those of the M74, while a shorter Westbound Link bridge (to be completed later this year and constructed with precast concrete) will connect to the outer Westbound  carriageway of the M8.

Structural engineer for the project is a Jacobs/Atkins joint venture and it says steel was chosen for the major bridges because of economics and ease of construction. The structures span busy roads and railway lines and the client wanted to limit the time of possessions and closures. Steel bridge girders assembled off-site can be lifted into place overnight and thereby keeping disruption to the general public to a minimum. 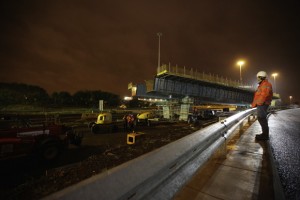 Steel was the chosen material because of the length of spans and the need for short term possessions. 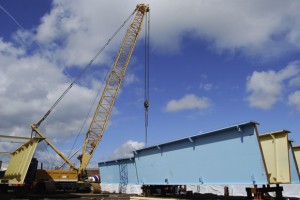 The large girders for the Port Eglinton Viaduct being assembled

The steelwork for the bridges is being fabricated at Cleveland Bridge’s Darlington facility and delivered to site for assembly and erection. In the case of the M8 Eastbound Link Bridge steel was delivered in 20 sections, ranging in size between 16m and 34m long, and weighing  between 40t and 70t. Once on site these fabricated sections were welded together, at two separate assembly yards either side of the M8, to form eight large girders weighing up to 200t each and 70m long. These main girders were then lifted two each night during four partial and full carriageway closures of the M8 motorway.

Lifting these huge steel girders into place required months of planning and required the use of the UK’s largest mobile crane, a 1,200t capacity Gottwald AK-680, which needed 30 trucks to deliver it to site.

The Gottwald crane initially erected the two girders which span the existing Paisley slip road. ”Although this crane has a very substantial lifting capacity the assembly area available was limited so that self-propelled modular trailers (SPMTs) were used to move the assembled sections to within pick up radius of the crane,” explains Mr Osborne.

Once the first two lifts had been completed the entire crane, fully assembled with its 95m long jib, was moved by the same SPMTs to a second position on the same side of the motorway to lift the next two girders over the M8 Eastbound carriageway. The crane was then fully dismantled and moved across to the other side of the motorway to lift the final four girders over the M8 Westbound carriageway during two night time closures.

“We were delighted to reach this important milestone on the project,” comments Interlink M74 JV Project Director David Welsh. “The works are already visible and these beams, which will be seen by thousands of motorists each day, emphasise the significant progress being made on this job.”

Work is now progressing towards the next bridge challenge which involves the largest steel bridge structure on the route, the Port Eglinton Viaduct. This 750m long bridge consists of 14,500t of steel and spans not only the West Coast Mainline, but also the SPT Underground tunnels near West Street Station, the Paisley, and City & Union rail lines, and Eglinton Street, one of the busiest roads into Glasgow city centre.

The benefits of off-site construction are coming to the fore on this structure as the large box girders are currently being brought to site in sections and then welded together in two separate assembly yards. One for the bridge works to span the Paisley Line ,City & Union Line and SPT Underground tunnels and the other assembly yard for the larger box girders to span the West Coast Mainline.

Once again it is anticipated that rail disruption will be kept to a minimum as the Port Eglinton structure will be erected primarily during overnight rail possessions.

Also early next year steelwork will start on the Rutherglen and Auchenshuggle bridges.