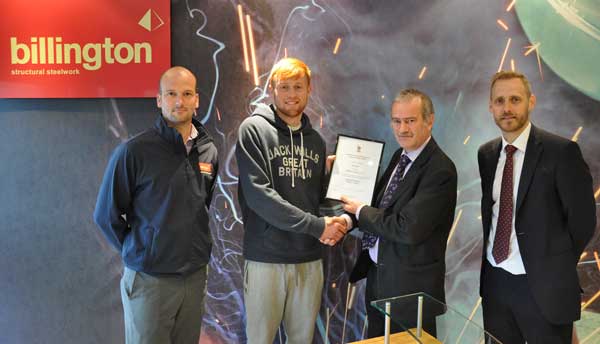 Mr Shaw completed the training modules with the assistance of coaches from within his workplace.  The monitoring of the training and final confirmation of the different modules’ tests was validated by the BCSA Registered Validator, Jon Wright, who is also the Workshop Supervisor and Responsible Welding Coordinator for Billington Structures at its Wombwell facility.

BCSA Director of Health, Safety and Training Peter Walker said ‘This CRAFT Structural Steelwork Fabricator-Welder Certificate is the first to be awarded, and I am pleased it has been awarded to Alex as he and Jon have been actively involved in the content of the training modules, and their suggestions have contributed to the design, measuring and monitoring of the CRAFT Apprentice Scheme.

“Credit also goes to Darren Kemplay, Billington Structures’ Group HR Manager for coordinating the successful liaison between those busy working in a production environment and the BCSA, which enabled the successful piloting of the first CRAFT Structural Steelwork Fabricator-Welder Apprenticeship.”

In order combat a possible skills shortage in the steel construction sector, the BCSA, together with its members, has developed an industry specific apprenticeship training scheme that is called CRAFT (Competence Route of Attainment in a Fabrication Trade).