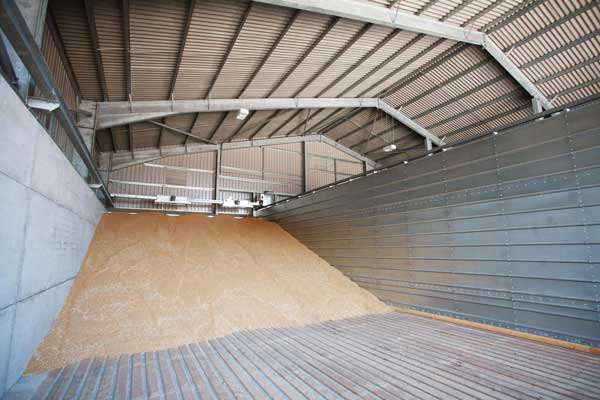 David Brown of the Steel Construction Institute highlights some of the important changes in the 2013 Amendment to this Standard.

Agricultural Buildings
The first interesting point about agricultural buildings is that they are generally exempt from the England and Wales Building Regulations. If they are not used as a dwelling, not close to a building with sleeping accommodation and have sufficient fire exits, then no reference to the Building Regulations is required. This means that no structural design calculations will need to be submitted for review. In Scotland, the requirement for a building warrant means that the design must be approved by a qualified structural engineer.

Agricultural buildings do have their own design Standard – BS 5502-22:2003, which was amended (generally to reflect the introduction of the Eurocodes) in 2013.  BS 5502-22 contains much interesting information, such as animal weights and the density of stored materials. Who would know that “heavy hogs” are six times as heavy as “weaners” or that cauliflowers are 50% denser than cabbages (but have the same angle of repose, when stored)?  The Standard also has important information for the structural engineer responsible for the steel frame.

Building Class
The previous version of the Standard had four different design classifications, but in the 2013 Amendment, this was reduced to just two classes. Clause 14.1 advises that (subject to some exceptions) most agricultural buildings should be designed as Class 2, which has a minimum design life of 20 years and reduced loading, as will be seen in the following sections of this article. Table 1 of BS 5502-22 notes that the consequence of collapse is greater in buildings or structures of larger classification number, but perhaps this should really be the “probability” of collapse is greater. 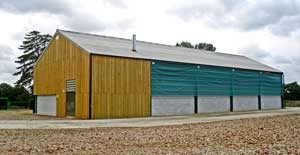 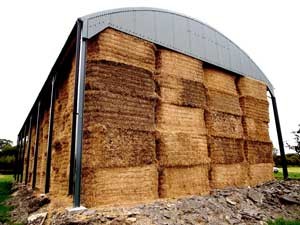 Structural Design
According to clause 16, structural design should conform to the relevant Eurocodes. Of most interest are the imposed loads on the roof, and the fact that design loads are to be based on classified loads, rather than loads as determined from the appropriate part of BS EN 1991. Classified loads are the characteristic loads (from BS EN 1991), multiplied by a classification factor, which for a Class 2 agricultural building is 0.9.  For Class 1, there is no reduction. Class 1 buildings are really no different to any other structure.

Structural steelwork is to be designed in accordance with BS EN 1993. In the author’s opinion, it is interesting that for structures covered by the Building Regulations, the Eurocodes are only one way to satisfy the requirements – Approved Document A specifically notes that it may be possible to demonstrate that the use of withdrawn Standards continues to meet the Requirements. However, for agricultural buildings, where one might observe that the design requirements are less onerous, the Eurocodes are the only design Standards cited in BS 5502-22; withdrawn Standards such as BS 449 and BS 5950 are not to be used.

BS 5502-22 has advice on light gauge steel purlins and cladding. Purlins may be hot rolled members, and simple size provisions are given for angles and rectangular hollow sections. The Standard helpfully reminds designers that purlin resistance depends on restraint to the compression flange and that this may not be the case if fibre cement sheeting is used.

Loading
Loading is covered in clause 15. The introduction to the clause indicates that in some cases, the specified loading is based on experience. From clause 15.1.1: “Not all the values given have been obtained from statistical studies, but they are based on figures used by engineering designers for many years”.  Wind loads are to be determined from BS EN 1991-1-4, so there is no evading this complexity.

Roof loads
Imposed loads on roofs deserve a special mention, as they can appear relatively low compared to ‘normal’ design. For Class 1 buildings, the imposed load on the roof should be taken from BS EN 1991-1-1 and will result in the familiar figure of 0.6 kN/m². For Class 2 buildings, where there is no access to the roof except for necessary cleaning and repair, the uniformly imposed load on the roof should be taken as 0.4 kN/m² as a maximum value. This value is taken from Table 6.10 of BS EN 1991-1-1.

In common with all buildings, the snow load is identified separately from the imposed load, and should be determined from BS EN 1991-1-3 and the UK National Annex.  As a reminder, the Eurocode approach to loads on a roof is that imposed loads are not combined with either wind or snow (clause 3.3.2(1) of BS EN 1991-1-1). This means that typical combinations of actions are:

For Class 2 buildings, all loads are reduced by the classification factor of 0.9.  A comparison of typical ‘gravity’ design loads between Class 1 buildings and Class 2 buildings is given below. The permanent actions are assumed to be 0.15 kN/m². It is assumed that the snow load is less than the imposed load on the roof.

The design load for a Class 2 agricultural building is therefore around 65% of the ‘normal’ design load – which is a reflection of the reduced design life.

A word of warning
Although BS 5502-22 has specific provisions addressing reduced loading for Class 2 agricultural buildings, it seems obvious to say that all other requirements for good engineering remain in force. For agricultural buildings, which may be open-sided, or have no opportunity for bracing in one or more elevations, or may have timber purlins, the requirements to providing a stable, robust structure with appropriate restraint to members may be more challenging than for the steel frame in an equivalent fully clad industrial unit.  Despite their exemption from the Building Regulations, the overarching requirement for sound engineering remains.

All images courtesy of A C Bacon Ltd