The purpose of this AD Note is to clarify the definition of the length of slotted holes and kidney shaped holes. The need for clarification has arisen because some designers have been using a value other than that intended.

In BS 5959-1:2000, Tables 33 and 36 give the standard dimensions of holes for non-preloaded and preloaded bolts respectively. The tables include values for the dimension “length” of slotted holes and kidney-shaped slots. The “length” of the slotted hole given in those Tables is intended to mean the overall length of the physical hole, as shown below for both slotted holes and kidney-shaped slots.  In support of this meaning, the same definition can also be found on page 8-213 of the second edition of the AISC “Manual of Steel Construction, Load & resistance factor design, volume II, Connections”. 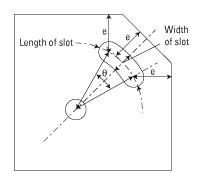 The misinterpretation seems to have arisen when the distance between the centres of the circles at the ends of the slots (which is a dimension given in some software) is used instead of the correct definition.  Designers should take care not to use the wrong dimension, because that might result in long slots greater than the limiting value or in classifying a long slot as a short slot (and thus giving an unsafe value of bearing and slip resistance).