To use a well worn phrase, the ‘wind of change’ is blowing vigorously through those regions where sport is promoted. This wind is soft and balmy quite unlike that which blows over football grounds and racecourses, as likely as not accompanied by driving rain or snow. Whether each generation becomes progressively softer one is not quite sure but it became clear a few years back that ‘fans’ were not prepared to stand for hours on end in the path of the winter elements as they had done for many years and attendances began to fall off substantially and abruptly. The promoters sat up and took notice of this unwelcome manifestation.

Eminent designers were consulted and the result has been a complete metamorphosis in the appearance of our sports arenas. Fast disappearing are the open terraces at football grounds, the ugly uncomfortable stands on racecourses. Elegant modern structures are rising in their place utilising the beauty and practicability of structural steelwork to the full.

Two of the best known arenas to be treated this way were, of course, Wembley Stadium and Royal Ascot racecourse. A new stand at Ascot is to be opened by H.M. the Queen in June (1964). But many less nationally known stadia familiar to local people have been similarly treated and we are illustrating a number on these pages. Included in this selection is a fine example from Naples and the illustration is reproduced by kind permission of the engineer. 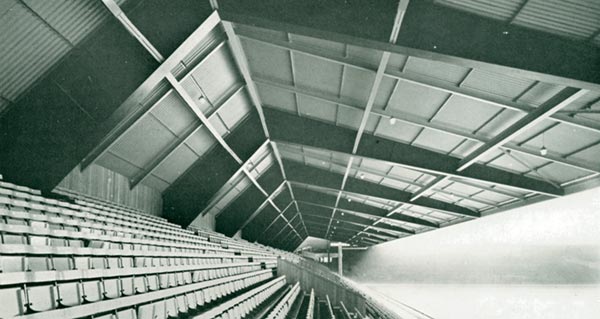 This is a most attractive structure designed by Bingham Blades & Partners, consulting engineers. An old stand had to be demolished to make way for this modern structure: erection of the steelwork, some 410 tons, was completed in 4 weeks during the ‘close’ season. 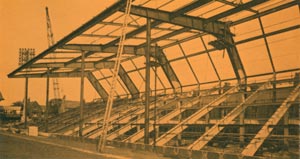 Length of the stand is 360 feet, with welded cantilever frames at 36-ft centres and intermediate framing at 12-ft centres. There was one site welded joint on each of the main frames, the weld being checked by X-rays.

The structure itself was analysed for wind effects in the wind tunnel at Liverpool University. Fire resistance is provided mainly by lightweight cladding. Having a cantilever roof the stand has no sight-obstructing supports. The stand seats some 7,000 spectators, all season ticket holders. 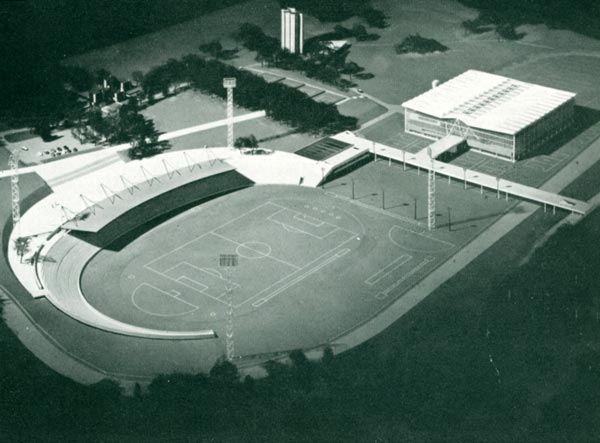 This is a large undertaking costing £2 million and will provide on this natural site something that the country has always lacked – a really national sports centre. The main picture shows a model of the completed project and the inset is of the unusual structural design for the 284 ft × 268 ft × 68 ft high sports hall. Steelwork has been used in the stadium, practice area and restaurant and in the common room and library adjoining the eleven-storey athlete’s hostel.

The building is openly planned with the roof structure cantilevering from a central spine framework of specially prepared concrete. The trusses and cross-braces produce, when covered, a series of roof booms giving a saw toothed pattern. 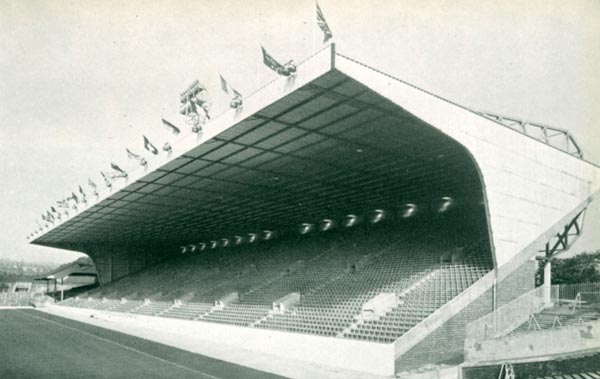 The cantilever stand illustrated is part of an overall plan by the club to have all spectators on the ground under cover, and to make the ground what the consulting engineer has described as ‘The Wembley of the North’.

The stand is 360 ft long with a light cantilever roof having an overhang of 124 ft. The overall length is divided into nine sections of 40 ft; each section contains 1,112 seats making a total capacity of 10,008 seats in all. The roof trusses are cantilevers 124 ft long, supported entirely from the back of the terracing. Mild steel was chosen as the most suitable material for the roof structure after its advantages had been compared with aluminium and reinforced concrete, 36,000 high strength friction grip bolts were used on the structure. Consulting engineers were Hudson & Co of Sheffield. 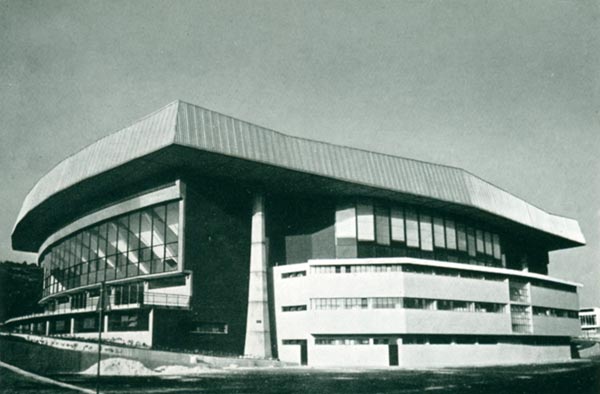 A NEW STADIUM IN NAPLES

The structure is of particular interest, firstly because the two-layer structural steel grid roof consisting of girders intersecting each other at right angles is supported on just four columns 177 ft apart. Secondly because it is completely all welded, most of it carried out 60 ft up on site. The total area of the roof is 288 ft x 233 ft and is made up by end overhangs of 28 ft or a total of 56 ft beyond the column spacing of 177 ft. Consulting engineer was Alberto Defez of Naples. 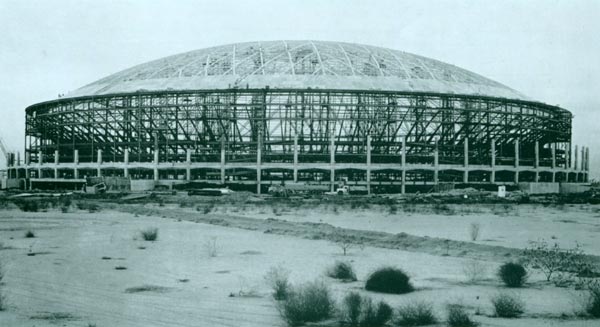 The new sports stadium now being built six miles south of Houston, Texas, will have the largest steel clear-span dome in the world – 642 ft. The stadium will be a remarkable structure altogether: it will seat 60,000 persons for conventions, 46,000 for baseball, 53,000 for football and 60,000 for boxing. Outside diameter is 710 ft, height from playing field to top of dome is 213 ft, enough to fit the nearby 18 storey Shamrock-Hilton Hotel underneath. Architects: Lloyd & Morgan and Wilson, Morris, Crain and Anderson of Houston. 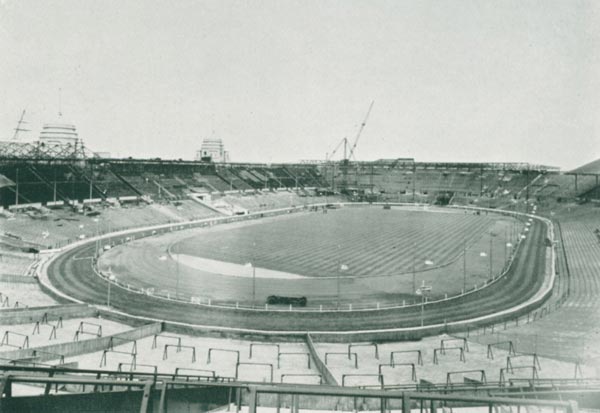 The whole of the national stadium was completely roofed in by the time the 1963 Cup Final was played. This was a major undertaking in which 1,500 tons of structural steelwork was used in the roof structure. All the members were shop welded and bolted on site. Consultants for the whole undertaking were Sir William Halcrow and Partners. Illustration shows the roof steelwork in course of erection on the vast arena. 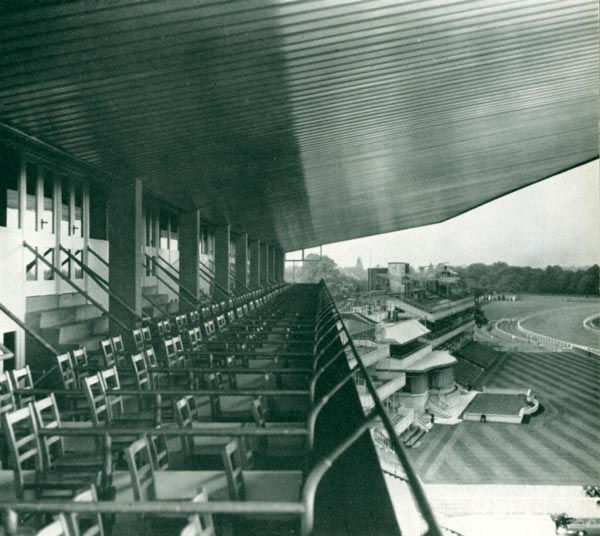