20 Years Ago: Confessions of a Codewriter

Time, as usual was racing on. Lunch had been a coffee and curly sandwich and I was trying to complete my normal working day an hour earlier. There seemed to be an incessant number of phone enquiries ranging from steel quantities and sources of supply to publication queries and I still had to complete a written response for one of our members prior to leaving. Eventually I had finished (or was it stopped) and the only bend I now had to go around was regarding curved beams. My thoughts regarding these had not quite formed into a firm proposal that I could put to my colleague the following day. However, I still had a few hours left before then so I switched my mind onto automatic, picked up my bag and started on my way to Heathrow for the flight to Brussels.

Almost gone now are the days where I could just go to London, meet the other UK code writers at the BSI meeting centre and return home that night. Now the normal thing is a flight to Brussels to meet at the CEN offices. Here with my European national counterparts, a European Standard is being prepared which will eventually replace the equivalent national standard in all our countries. To do this means flying out the night before to be ready to start at 09.00hrs; here in the UK, morning flights tend to be impossible with the one hour time zone against you!

So here I was with my curve problem, ie how to draft a clause that would cover the differing tolerance requirements from cambered through to curved beams that were reasonable to fabricate to but not so excessive as to cause problems to the following trades. Between leaving the office and the start of the meeting I needed an answer, and like most of the drafters I know, that needed uninterrupted thinking time. This is a luxury seldom, if ever, available when engaged in routine duties at one’s office. I had the result of my previous research, viz, a summary of clauses on this subject taken from the various national standards in the office, my personal experience of what was achievable in practice and an instinct of what might be acceptable in the European Community at the end of the day. This latter item is important as at CEN a weighted voting system is in use to approve a standard rather than the consensus agreement adopted at BSI.

As any tolerance has to be measured by at least two people it needs to be set so that both obtain the same result whatever the condition of their eyesight. The method of measurement of these tolerances should preferably be simple and carried out with reliable instruments. If I could arrange this to be done just by the use of a rule or tape, a line or plumb bob then so much the better. There is little that can go wrong with such ‘instruments’.

I then considered the normal procedure of setting a minimum tolerance, having a uniform variable tolerance over the general range, and finally a maximum tolerance that should never be exceeded. As in this case the tolerance range was likely to be small, I felt the middle section should be omitted, or replaced with a single step if subsequently found necessary.

Of course not all tolerances given in a specification need to be measured  to ensure acceptance. In fact when the first issue of BS 449 was published almost the only tolerance measured was the length of the beam or column. That single requirement virtually controlled all the steelwork erected, viz if it did not fit, it was wrong! There is a school of thought that fabrication tolerances are not essential; the end product is an erected steel framework and it is that alone that must be right at the time of handover. Although it is not a point of view I subscribe to, it does have some elements of logic.

The number of items for which I have been asked to set tolerances is growing often from the requirements of the following trades, the use of large pre-assembled cladding panels and other types of unit construction, etc. The growing importance of quality assurance and introduction of legislation such as the products directive in Europe are also requiring controlled checking to be carried out at intermediate stages of production.

Most people realise that you cannot quality assure a product unless it is processed to a standard and that standard needs to be in specification terms and not those of a code of practice. Here in the UK this has always been the case for steelwork, relying on British Standards 449 and 5950 part 2 and more recently the National Structural Steelwork Specification. I wonder what happens to structures in the UK for which similar standards do not exist. For such cases, unless the specifier incorporated suitable clauses in his Contract Documents, there may be little control on the resulting structural elements.

The majority of code writer with whom I am in contact are engineers mostly involved in working on building structures on a regular basis. The responsibilities we share are undertaken voluntarily, often with more kicks than rewards! From some of the queries I have to deal with it would seem that some people are under the illusion that the clauses have some mystic power as if they were inscribed on tablets of stone. Experience is only worth the paper it’s written on, and this is what we are giving: our experience in an endeavour to ensure that our successors design structures that are neither unsafe nor unserviceable in use. No standard can over every situation and eventually a designer may have to use his own engineering judgement, and I hope that the guidance given in the standards we write will ensure the correct judgement is made.

Closing my front door quietly that following evening I crept upstairs. “Hi” said my wife’s voice in the dark, “How was Brussels?” “Wet” I responded, “what little I saw of it between the airport and the city centre. However, I did manage to get most of my proposals accepted at this stage so at least I do not feel my time has been wasted”.

In fact the French and Germans were quite supporting of the work that had been done which I found personally quite pleasing. You see, code writers are human after all – with feelings just like you! 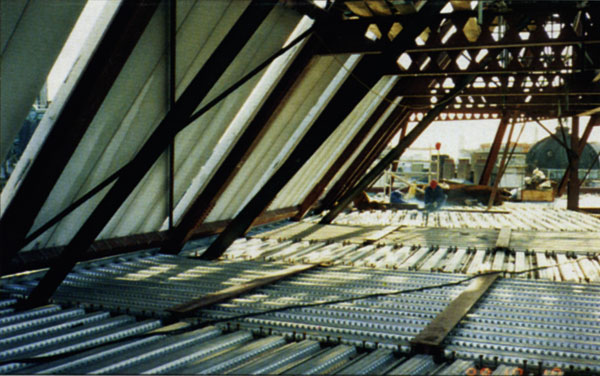 The redevelopment of Sir Edward Lutyens’ Britannic House in Finsbury Circus, now known as Lutyens House, has recently been completed following a three year design and construction period. Some 19,000m² of high quality lettable office space has been created behind the magnificent restored Portland stone façades and marble lined entrance halls of one of the City of London’s major commercial buildings of the 1920, originally the headquarters of the Anglo Persian Oil Company (now BP). Built in two phases between 1924 and 1927, the building was listed Grade II in 1950. The original steel frame has been retained in parts and complemented by a new composite construction steel frame. The results show how conservation of a historically important building can be successfully reconciled with the demands of 1990s office users and technology.