20 Years Ago: BCSA mission to Japan 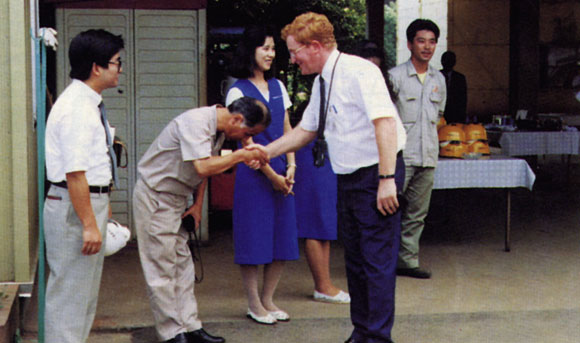 In terms of output the British Structural Steelwork Industry is the European leader. However, on an international scale it is sobering to note that Japan, with only twice the population of the United Kingdom, produced ten times the amount produced by the UK in 1990. As an economic power Japan has undergone astonishing growth in the last few decades which has been witnessed by Western eyes with a mixture of admiration and fear. It is hardly surprising that the visit to Japan by BCSA members was keenly supported. The group consisted of thirty people representing eighteen fabricators and three steel suppliers.

We received advance briefing on what we were likely to see, but we left for Japan with an open mind and a brief to tour fabrication facilities. The time we were given for the tour was comparatively brief, the entire visit being effectively four days. In that time we visited three fabricators, two sites, a CAD/CAM centre; and had meetings at the Kozai Club and the Japan Steel-Rib Fabricators Association plus meetings with the British Embassy staff.

At our first briefing on our arrival we quickly learned that there was a need to appreciate the economical and political background to the Japanese business life, which appears to be a fully integrated national plan. We were encouraged to hear that the Japanese have a healthy respect for UK fabricators as witnessed by them when they visited some of the London sites early in 1990. Our flair for producing architectural steelwork is an attribute admired by the Japanese.

Our visits to the three fabricators showed work in progress at a very high level. Order books are full for at least nine months up to two years. The lead time from release of all details to delivery to site is approximately five months with the likelihood of variations being almost nil.

As a generality the fabrication equipment was similar to the UK but with widespread use of bandsaws and coping machines. Assembly work is carried out by the fabricator as far as possible, this being an international policy decided by the main contractor who, in turn, has responsibility for erection. Assemblies were repetitive with a common adoption of “Christmas Tree” assemblies with stub beams shopwelded onto the columns, which were predominantly box sections.

Each work station was stockpiled and laid out in the fashion of a standard production line. The planning of the flow of materials and work areas must have been very detailed, and further study of this aspect of planning would be beneficial. Coping and preparation machines were used as a matter of course, the use being justified by the quantity and standardisation of design/detail, and the shortage of labour.

Materials handling is also a technique worthy of further study. The use of rollerball beds was simple and effective and one had to marvel at the vast movement/stockpiling of pieces within the factories. It must be said that the party were far less impressed with the stockyard and dispatch areas. We also saw some beam lengths being drilled prior to sawing which again prompts further study.

At first glance Japanese design seems heavy but it is not possible to analyse its merit without further knowledge of restraints of design such as safety, earthquakes and so on.

We were informed that Japanese consultants sometimes show reluctance to accept standard details and prefer to adopt their own details. We suspect this is the exception rather than the rule, and it can be appreciated that certain configurations may be of necessity be non-standard. Unquestionably the Kozai Club and the JSFA have made great efforts to rationalise connections as witnessed by the two excellent volumes of ‘Standard Connection of Steel Structures’ which contain not just tables, but also clear illustrations and photographs of appropriate standards of fabrication. These volumes compare more than favourably to the alternative and more customary specification which is usually illustrated text printed in small type, requiring a  barrister to interpret same!

It is significant that Japanese fittings are bought in ready made in standard batches of steel or castings. The Japanese seem to buy these as commonly as we buy bolts.

The design and shop detail drawings are provided by the consultant and demonstrate the immense advantages of reasonable standardisation programmes and a reduction in variations. If variations do occur, then the effect is more clearly identified and measurable.

The ‘Manhattan’ hotel site was a source of envy amongst our contingent. The site pervaded an air of quiet efficiency which we felt was the direct result of detailed preplanning. We also felt that the standard methods of design and the resulting repetition was a major factor in aiding the high degree of planning.

Clearly the main contractor, who is himself responsible for the erection, has intentionally kept the work on site to an absolute minimum – even to the extent of arranging for the fabricator to carry out site welding and final bolting up.

From observations of the UK contingent the rate of erection was not dissimilar to that of the UK. However, this assessment would require further analysis taking into account the overall programme of activities, some of which would be carried out by the erection gang as part of the Main Contractor’s team.

We were impressed by the very minimal work required to be done by the erection gang, and by the safety measures provided.

We had been previously advised that the Japanese maxim for standards of fabrication and erection was ‘fitness for purpose’. This proved to be exactly the case. Simplicity with cost effectiveness was very apparent. It was noted that the general arrangement drawings contained details of the connections (rather than full members) which must have been extremely useful to refer to on site.

“Trust” was a word used over and over again by our hosts and clearly, the preponderance of a UK form of contract was of indeed a foreign language to the Japanese.

Contractural considerations were hardly a factor. To quote one of our members: “Because of trust and co-operation, there was a distinct lack of contractual involvement in their industry. The UK industry would greatly benefit from a reduction in the line of dependence on constant reference to ‘The Contract’ which is a great waste of our skilled managers’ ability and time.”

Price levels in Japan were stable to the extreme. The last increase in steel price was in 1982. Contract prices were negotiated and trading houses were a central source of negotiation. The role of the trading house was explained to us using a range of products from noodles to aircraft!

At every stage of a project a strong ‘face-to-face’ link existed. The enquiry allowed realistic programming enabling everyone to work enthusiastically and happily to a common purpose. A strong sense of leadership was present, everyone having faith in and knowledge of the project.

The Japanese ‘toolbox’ meetings are well known. These must have merit if one considers the alternative which often is a trail of queries to the office of the supervisor/manager/main contractor, etc.

Japan is regarded as world centre of computer hardware, so it was perhaps surprising to gain an impression that their software production is not correspondingly in step. The Japanese to whom we spoke informed us that their Management Information Systems were generally not yet computerised. We were also surprised to note that CAD/CAM systems were not yet fully integrated, particularly in view of the standard nature of their fabrication.

However, signs of investment are unmistakable with the growth of software houses (such as the CAD/CAM centre we visited) and the current installation of welding robots. It was tantalising to have a view of uncommissioned welding robots which led us to believe that software development is gathering pace.

The visit showed us most clearly the continuing concerted efforts being made in Japan to constantly improve its industry. Investment in plant and buildings is most apparent and one had a feeling on continued change. The use of small companies was no ignored and, indeed, appears to be a vital part of the Japanese industrial scene.

We must therefore ask similar questions of ourselves in the UK. We concluded that is incorrect to view Japanese industry as being ‘featherbedded’ and it is incorrect to dismiss the attitude of the Japanese worker as being due to ‘culture’ (whatever that might mean). Attitudes clearly can be affected by leadership and recent history as described in this report shows the lead taken by the industrial sector at Government level and by the trade leaders and the companies themselves.

Clearly, in the UK we have for a very long time developed within individual organisations various information and operational systems, but these have been generally devoid of national/international involvement. The adoption, for instance, of standard details is universally agreed to be a vital ingredient for optimum production. The Japanese are well aware of this need and have already made great strides in this direction and continue to address the task with praiseworthy vigour.

In the UK and across Europe, efforts are similarly afoot within the ‘EUREKA Cimsteel’ project which presents an ideas opportunity to mirror the efforts of the Japanese. The EUREKA project will require the very same vigour shown in Japan if we hope to harmonise the conception, the plan, the implementation and the control of our manufacturing processes. If, however, we choose not to ‘sing out of the same hymnbook’ we must face the inevitability that our industry will contract and the gigantic structural steelwork industry in Japan will once again lead the march of industrial progress with the same determination recent history has shown us they are so capable of.

We have much to learn from Japan and it was encouraging to us during our visit to realise they equally can learn from us. The UK structural steelwork industry is much respected by the Japanese and their interest in us is very keen.

Co-operation or competition? In seeking an answer to this question from the Japanese, they appear to prefer the former as a better option. Their desire to impress and make friends of us was most apparent and we left Japan with a sense of optimism.

The ‘miracle’ growth of Japanese industry was undertaken by an environment of the need for national survival, strong direction, opportunism and (some say) good fortune. But, whatever the environment, the common factor is determination and the will to succeed.

The common thread within UK industry is less easy to identify. Conformity is perhaps less characteristic here in the UK but the strength of united progress has never failed to emerge in times of crisis. Nevertheless, the question remains – do we have to wait for a crisis? Improvements within our industry, as with any change, are best brought about by a steady and constant process, rather than spasmodic emergency-driven bursts of attention. The adoption of the EUREKA Cimsteel project is a major step in the right direction, providing as it does an opportunity for industry and Government to have a concerted approach.

The mission has seen the benefits gained in Japan by the successful operation of a non-cyclic economy. Uncertainties are therefore minimised and the progress in the industry is determined by a firm and dedicated policy by the whole of the country from its leaders to its workers.

In looking forward it is always advisable to also look sideways and missions such as this serve to highlight the choice we have to make. Do we continue to fear and envy our competition, whether these by other countries or other materials, or should we determine to improve our industry by a natural desire for co-operation and corporate involvement?

The UK constructional steelwork industry has mush to be proud of and the members of the mission hope that, in bringing back our experiences, we have further stimulated our common purpose. 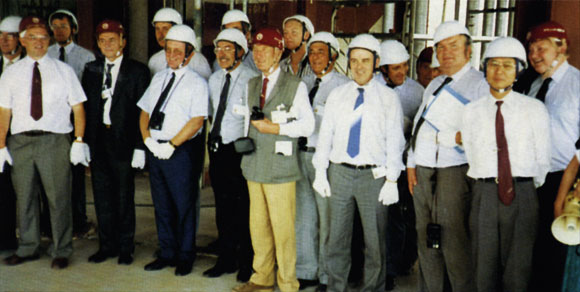