The two halves of Tintagel Castle have been reconnected for the first time in more than 500 years by a new steel footbridge.

Perched on two rocky outcrops along the north coast of Cornwall, Tintagel Castle is a spectacular site, divided by a steep gorge. The main part of the castle is predominantly positioned on a headland, which was once linked to the mainland and its gatehouse by a narrow strip of land that was lost to erosion sometime during the 15th or 16th Century.

Subsequently, visitors crossed a wooden bridge at the foot of the void and climbed a series of vertiginous steps onto the island. This restricted access caused significant congestion in the summer months and ruined the experience for many visitors.

The opening of the new footbridge has alleviated this problem and restored the original link, allowing visitors once again to walk in the footsteps of the site’s medieval inhabitants. 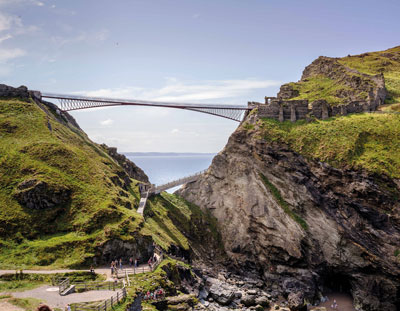 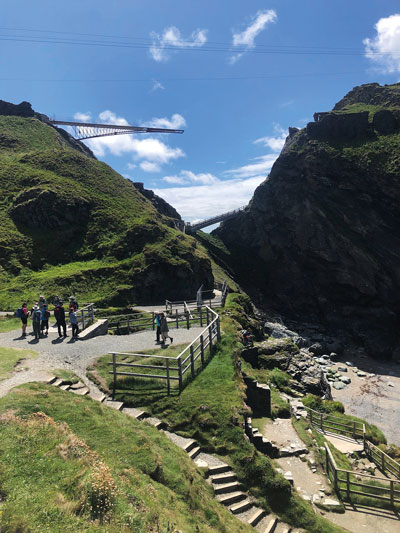 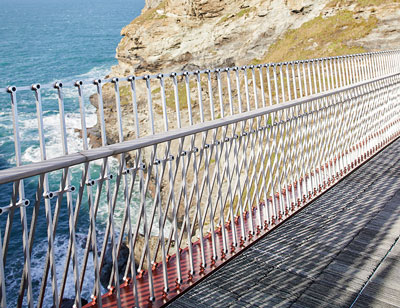 Project Architect William Matthews says: “The design of the footbridge is relatively simple – two 33m-long cantilevers which reach out from each abutment and don’t quite meet in the middle.

“The central gap serves two functions; technically it allows each bridge half to expand and contract with variations in temperature; and poetically it creates a threshold between the mainland and the island. A series of 16m-long rock anchors tie the bridge halves into each cliff face.”

The palette of materials is said to be equally simple. Painted mild steel has been used for the main chords, duplex stainless steel for the cross bracing, deck trays and balustrading; Delabole slate laid on edge for the deck finish, and untreated English oak for the handrail.

Each material was selected for its durability as the site is in an extremely harsh marine environment. Architecturally, the aim was to create a bridge which was resolutely contemporary in its design and fabrication, but also timeless and complementary to its setting.

The steel element was chosen as a lightweight solution and one that could be fabricated offsite into deliverable pieces. Getting the steel elements to site was just one of the challenges that needed to be overcome, as the gatehouse can only be accessed by one narrow lane. A multi-axle vehicle was used to deliver the steelwork and navigate the winding road.

Lifting the steel into place was another significant challenge, with no room or access for a crane in the gorge, which is more than 60m-deep. A cable crane was installed, more commonly used in mountainous regions such as the Alps, to supply materials and even personnel to otherwise inaccessible locations.

The cable crane had a 5t lifting capacity, could pick-up steel elements from a small holding area on the headland and subsequently fed the construction of the bridge’s two cantilevers.

None of the bridge’s steel elements exceeded the cable crane’s capacity, while the largest two pieces, each 10m-long × 4.5m-deep – installed at either end of the cantilevers, where the structure meets the abutments – where within a size that was transportable on the access route.

All of the steel elements were fabricated by Underhill Engineering into fully assembled and erectable pieces, that included top and bottom chords, bracings and cross members.

A total of six pieces were needed for each of the cantilevers. As the bridge is in a very aggressive environment with plenty of wind-borne sea salt around, mild steel was chosen for the parts which can be easily repainted and stainless steel, which is more resistant to corrosion, for the areas where painting would be more difficult.

The connection points between each individual steel assemblage (two on each piece) are also fabricated from stainless steel and were welded to the main cord members during the fabrication stage.

The connections consist of finger joints that interlock with opposite members on the adjoining section, similar to a woodwork dovetail joint. Once the individual sections were lifted and manoeuvred into place during the erection programme, the connections were then bolted up.

Underhill’s fabrication process required some precise engineering and each section was trial erected with its neighbouring piece to ensure the two cantilevers could be seamlessly installed on-site.

Construction started in September 2018 and was completed in August 2019.

Summing up, the judges say it is a highly crafted and timeless structure: daring in its concept yet modest and sympathetic to its historic and natural context. Every steel component has been carefully detailed for constructability and durability, elevating the graceful aesthetic.

The project is a triumph: a credit to English Heritage’s vision and the entire team which employed mostly local fabricators, supported by alpine construction specialists.