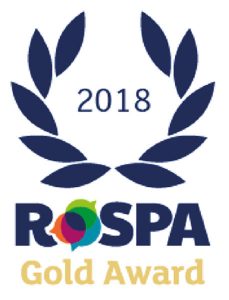 British Steel’s Teesside Beam Mill (TBM) has been handed a prestigious award for a third time for helping its employees get home safely at the end of the working day.

TBM has achieved a Gold in the internationally-renowned RoSPA Health and Safety Awards, one of the longest-running industry award schemes in the UK.

The RoSPA Awards scheme, which receives entries from organisations around the world, recognises achievement in health and safety management systems, including practices such as leadership and workforce involvement.

TBM Plant Manager Andy Williams said: “This is a fantastic achievement which everyone at Teesside Beam Mill has contributed to.

“Nothing is more important than going home safely after your shift so together we all work extremely hard to maintain the highest of standards.

“We’re proud of our safety performance at TBM but won’t rest on our laurels, and we’ll continue to look at ways in which we can further improve our performance.”

Julia Small, RoSPA’s Head of Qualifications, Awards and Events, said: “The RoSPA Awards are the most highly-respected in the health and safety arena, with almost 2,000 entrants every year, and allow organisations to prove excellence in the workplace, demonstrating a commitment to the wellbeing of not only employees but all those who interact with it.”

TBM was previously awarded a RoSPA Gold Award in 2016 and 2017. Recently it also has won the Apprenticeship Award at the North East Business Awards 2018 for the support employees give to apprentices.