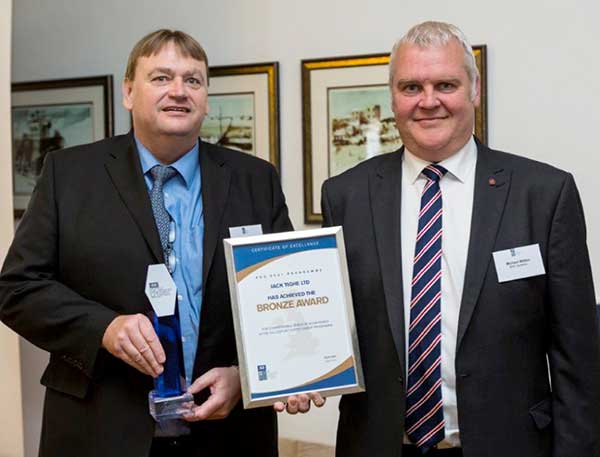 BCSA associate member Jack Tighe, that specialises in supplying paint to the defence, nuclear, rail, highways and petrochemical sectors has been awarded a SC21 Bronze Recognition Award for its manufacturing excellence.

SC21 is a change programme designed to accelerate the competitiveness of industry by raising the performance of supply chains. In 2011 Jack Tighe signed up to SC21 as a self-starter having recognised the benefits of the programme and viewing it going forward as being a key improvement tool for the business.

A consultant was engaged to undertake the SC21 diagnostics of Business and Manufacturing Excellence and it was this that formed the basis of the input into Jack Tighe’s first CSIP (Continuous Sustainable Improvement Plan).

Key improvement activities were identified in this initial 2012 CSIP. Having implemented these plans the company underwent a re-scoring of the SC21 diagnostics in early 2015 by DB Concept Solutions.

The results were very satisfying as the company’s Manufacturing Excellence score had increased by 15% and its Business Excellence score was up by 50%. These improvements coupled with 2014 quality and delivery results of a perfect 100% to the business group lead to formal recognition from the SC21 community in the form of the Bronze Recognition Award in March.

Jack Tighe Managing Director Martin Hillyard said: “The SC21 processes have altered the company in a very positive way. Before signing up to the programme we had numerous systems in place which, although helpful to the business, were not really monitored or reported upon. SC21 has been fundamental in pulling these systems together, then coordinating and improving them in a manageable ongoing way.”