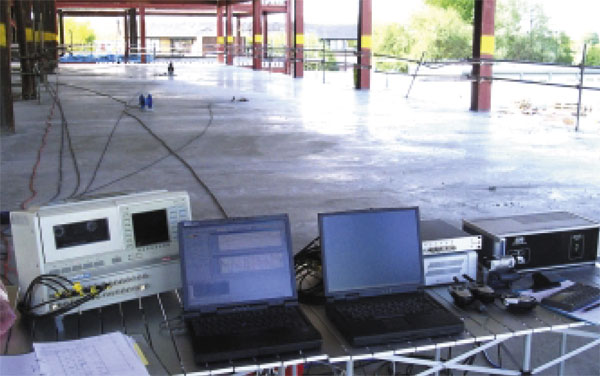 How should we approach the rapidly emerging problem of excessive vibrations of structures occupied and dynamically excited by humans? Aleksandar Pavic finds out.

Although often neglected or overlooked, vibration serviceability is becoming a governing design criterion for light and slender civil engineering structures occupied and dynamically excited by humans. Typical examples of these structures are long-span floors, staircases, grandstands and footbridges. As the trend towards lighter and more slender structures continues, it is becoming apparent that a significant number of important aspects when dealing with the vibration serviceability have not been adequately addressed in the past.

One of these, highlighted in 2001 by the ICE/IStructE Standing Committee on Structural Safety (SCOSS, 2001), is inadequate training of civil engineers in the UK to deal with dynamically responsive structures. Another is that the dynamic behaviour of civil structures under human-induced dynamic loading has not been adequately researched and reported in the past.

However, despite these rather deep-rooted generic problems, which are neither easy nor quick to solve, design decisions have to be made in contemporary design practice based on the current skills and knowledge.

Therefore, the aim of this paper is to increase awareness of vibration serviceability issues by: (1) outlining the rationale which should be followed when dealing with them; (2) highlighting the important considerations and misconceptions; and (3) listing some useful newly published references. Provision of detailed design guidance is beyond the scope of this paper.

Vibration is an omnipresent form of dynamic motion in which the structure oscillates about an equilibrium. In principle, everything vibrates all the time. The problem with vibrations occurs when they become excessive causing annoyance, malfunction of sensitive equipment, damage or structural failure.

Following the procedure outlined by the International Standardisation Organisation (ISO, 1992), the first step towards the assessment of vibration serviceability of a structure is to identify and characterize the following three factors: • the vibration source • the transmission path • the receiver

What is the vibration source?

Although other types of excitation do exist (ISO, 1992), human-induced dynamic loading (due to walking, running, jumping, swaying, deliberate bouncing, etc.) has proved to be the major source of vibration for the four above mentioned types of structures. This is because the nature of the structures is such that such loading happens frequently and, in practice, cannot be isolated.

What is the transmission path?

The transmission path is a medium which passes on excitation from the vibration source to the receiver. Structural components transmitting vibrations could be foundations, columns, walls, beams and floors, whereas non-structural paths may be access floors, removable partitions, cladding, etc. Physical properties of the transmission path, such as stiffness, mass or damping, modify the vibration excitation at the source into a structural response ‘felt’ at the position of the receiver.

What is the receiver?

ISO (1992) defines the receiver as “the object or person for which the vibration effects are to be assessed”. The persons are, obviously, the human occupants of the building whereas the objects can be either vibrating structural or non-structural elements (windows, walls, partitions, beams, slabs, etc.) or contents of the building such as instruments or machinery. The vibration passed to the receiver should be evaluated in accordance with certain established criteria. This evaluation is the core problem of the vibration serviceability assessment.

Although this rationalisation of the vibration serviceability problem into the characterization of the vibration sources, transmission path and receiver may seem simple, it is, actually, a very difficult task requiring a thorough understanding of the phenomenon of vibration of slender structures under human-induced excitation. Generally speaking, the usefulness of the current design codes is quite limited not only in the UK, but also throughout the world. Therefore, to achieve the required understanding, which also means awareness of methods and procedures which were published in the past but proved to be inadequate, such as the infamous heel-drop test in the case of long span-floors, it is necessary to have a good command of the information published in more or less obscure technical journals.

When this in-depth understanding is lacking, it is the writer’s experience that problems with vibration serviceability typically occur in practice due to poor design specifications (when it is not clear what the design should satisfy), lack of awareness, over-simplification and inadequate modelling in the design stage, or change of usage of already existing structures which performed well in the past under different conditions. Here ‘problems’ do not mean only excessive vibrations after the structure has been built or retrofitted, but also a production of over-conservative and expensive designs which are clearly not competitive and/or do not provide the client with the best value for money.

Wyatt and Dier (1989) introduced a concept of low- and high-frequency floors, which is now widely accepted in the UK and throughout the world. The key difference between them is that the former is excitable in resonance by footfall loading whereas the latter is not. Opinions differ as to the exact frequency which separates the two groups, so values varying from 7 Hz to 10 Hz or more can be found in the literature. 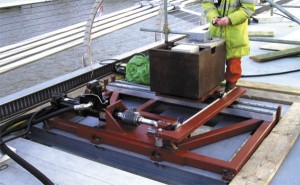 As recently as in October 2001, Arup addressed a large number of important and uncertain issues when dealing with civil engineering vibrations by organising a oneday seminar entitled Engineering for Structural Vibration – Current developments in research in practice. Two excellent papers were presented by Willford (2001) and Young (2001) during this seminar. The papers feature critical reviews and new easily implementable proposals as to the way forward when designing building floors.

Willford (2001) tried to make sense of the plethora of methods which currently exist in the technical literature for assessment of calculated and/or measured floor vibrations, which are neither consistent nor easy to employ in practice by a non-specialist. Also, a common misconception that the floor’s natural frequency could solely govern its vibration serviceability was addressed by stressing that it is in fact the vibration response of the floor and not its natural frequency that governs the serviceability. Therefore, floors with natural frequencies as low as 3 Hz can still be acceptable provided that they have sufficient mass and/or damping to reduce vibrations for the given excitation to acceptable levels.

Young (2001) stressed the need to formulate methodologies for checking vibration serviceability which would be based on first principles i.e. clear distinction of the vibration source, path and response assessment. Such a formulation then allows implementation of both simple closed form solutions and more demanding numerical calculation procedures, depending on the complexity of the problem at hand. Specific problems were highlighted with semi-empirical methods featuring in the existing design guides dealing with composite steel-concrete floors where the first principles were somewhat muddled in order to simplify calculations so that they could be made by hand.

Until the mid-1990s there was almost no information as to the design of long-span slender staircases to satisfy vibration serviceability. The key problem was the lack of knowledge of the level of human-induced excitation caused by one or more people ascending or descending stairs. Kerr and Bishop (2001) found that the forces from level surfaces, applicable to footbridges and floors, although frequently used in the past, should not be used anymore when assessing vibration serviceability of staircases.

The constant separation of steps in staircases provides an excellent pacing mechanism. This, and the ability of humans to ‘drop’ their weight while walking down stairs normally, can lead to peak dynamic forces four times the human weight and significant amplitude of higher harmonics of the periodic walking force. Therefore, staircases having natural frequencies less than 10 Hz may develop unacceptable levels of vibration. 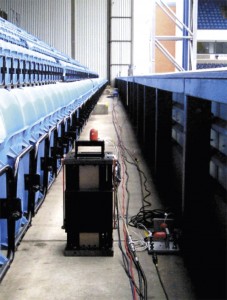 Fig 3: Modal testing of a grandstand using an electrodynamic shaker and piezoelectric accelerometers used at the University of Sheffield. (Photo: © VES)

There have been a number of problems with vibration performance of grandstands under crowd dynamic loading reported in the UK in recent years. In November 2001, a Joint Working Group set up by the IStructE, DTLR and DCMS produced an interim guidance (IStructE, 2001) on assessment and design of permanent grandstands subject to crowd dynamic action. The production of this guidance took almost two years because the subject area was far from easy to deal with.

The guidance deals with both new designs and existing grandstands and sets vertical fundamental frequency as the parameter which governs the design. If the frequency is higher than 6 Hz the grandstand is suitable for all types of events including viewing sports and concerts. If the frequency is lower than 3 to 3.5 Hz, stands are vulnerable and a flow chart was offered to help deal with the problem.

It is interesting to note that the guidance requires coupling of analytical calculations with testing of an as-built grandstand structure in order to ascertain the actual natural frequency. It should be noted that this guidance is interim and more detailed guidance based on vibration response levels is the long term aim of this working group. See box at end of article for more information.

The infamous problem of lateral synchronous excitation of the Millennium Bridge by walking pedestrians, and its successful solution, demonstrates the inadequacy of design guidance for similar structures throughout the world. Based on the findings of the research initiated by Arup in 2000 (Dallard et al, 2001), at least two national bridge design guidelines (in Canada and UK) now contain a warning about this phenomenon and some guidance as to how to deal with it. Another issue which is still not fully resolved in the case of footbridges (and grandstands to some extent) is how to deal with the deliberate, also known as ‘vandal’ dynamic loading.

Compared with mechanical and aerospace engineering disciplines where vibrations have been a dominant design consideration for decades, the civil engineering sector makes very little use of experimental testing on asbuilt full-scale structures. As a consequence, there is considerable uncertainty as to the analytical modelling procedures and their accuracy.

To validate emerging design methods and to check that structures meet vibration serviceability requirements, there is a growing need to employ advanced dynamic testing techniques, such as modal testing (Maia et al 1997), to check the modal properties (natural frequencies, mode shapes, modal damping ratios and modal masses) of real structures in operation. However, applications of modal testing on civil structures are still relatively scarce and the civil structural engineering community is sometimes reluctant to employ this powerful technology, which has become more readily available and affordable only in the last decade.

Current uncertainties when dealing analytically with vibration serviceability and our positive experience with carrying out modal testing on as-built structures such as floors (Fig. 1), footbridges (Fig. 2) and grandstands (Fig. 3), suggest that modal testing coupled with vibration response measurements is a prudent way forward wherever vibration serviceability is an issue in the design of new structures or when retrofitting existing structures.

The Institution of Structural Engineers has published interim advice on the design of grandstand structures. Concern had been raised at the increasing tendency for sports grandstands to be used for pop concerts and other non-sporting events, and for the crowds to move in synchronism.

The guidance document is recommended by the Department of Transport, Local Government and the Regions (DTLR) to local authorities for awarding safety certificates and for building control purposes.

Copies of the document: Dynamic performance requirements for permanent grandstands subject to crowd action – interim guidance on assessment and design are available free from Sue Doran, Director, Technical Activities at the IStructE.