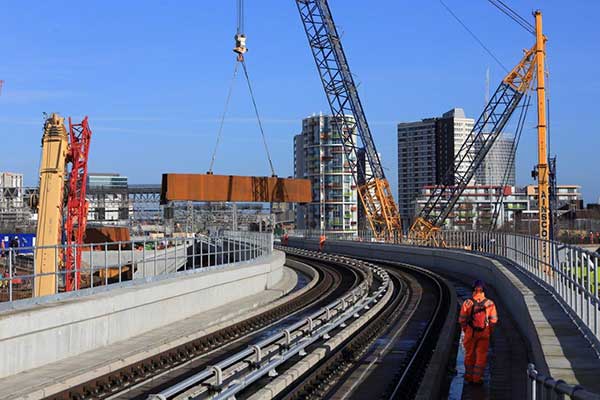 The new bridge will carry three rail lines (two Crossrail tracks and one Network Rail line) over the Northern Outfall, which is one of London’s largest sewers and topped by a public footpath known as the Greenway.

The bridge is located close to the Crossrail tunnel portals at Pudding Mill Lane and will help integrate the mostly subterranean Crossrail lines into the existing rail network.

Because the bridge incorporates a set of railway switching points, the structure is skewed and tapered in shape and so two box girders – 35m long (110t) and 28m long (92t) were installed.

Both box girders are 3.5m high and 13m wide and were lifted into place, between the Network Rail lines and the Docklands Light Rail viaduct, by one 700t-capacity mobile crane.

Including all of the cross members and infill steelwork, the bridge deck required 550t of structural steelwork.

During May Cleveland will install three smaller 55t bridge decks carrying the same rail lines over the nearby Marshgate Lane.

Main contractor for the Pudding Mill Lane works is Morgan Sindall. The project comprises the construction of a tunnel portal, a new elevated Docklands Light Railway station and bridge structures.