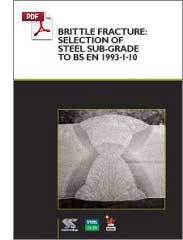 Commissioned and funded by the British Constructional Steelwork Association and Steel for Life, a new Steel Construction Institute (SCI) guide (P419) Brittle fracture: selection of steel sub-grade to BS EN 1993-1-10, as featured in last month’s technical article, has been added to www.steelconstruction.info – the free encyclopedia for UK steel construction information.

Selection of steel sub-grade is an important responsibility for all steel designers, in order to manage the risk of brittle fracture. The design rules in the Eurocode were developed for structures subject to fatigue such as bridges and crane supporting structures, and it is acknowledged that their use for buildings where fatigue plays a minor role is extremely safe-sided.

This new publication presents modified steel thickness limits which may be used in buildings where fatigue is not a design consideration. These new limits have been derived using the same approach behind the Eurocode design rules, but crucially reduce the crack growth due to fatigue.

The word “reduce” is used, since to assume no growth at all would be to eliminate the effect of fatigue altogether. According to the SCI it was decided that some fatigue should be allowed for even though for the structures within the intended scope, fatigue would not be a design consideration. Based on indicative guidance from a DIN Standard, 20,000 cycles were chosen.

The term “quasi-static” would cover such structures – in reality that there may be some limited cycling of load, but that would not normally be considered – the design approach is to consider all loads as static.

The key to the new approach is the formula to express the crack growth under 20,000 cycles. Experts at the University of Aachen (who were involved with the development of the Eurocode) provided this all-important expression.