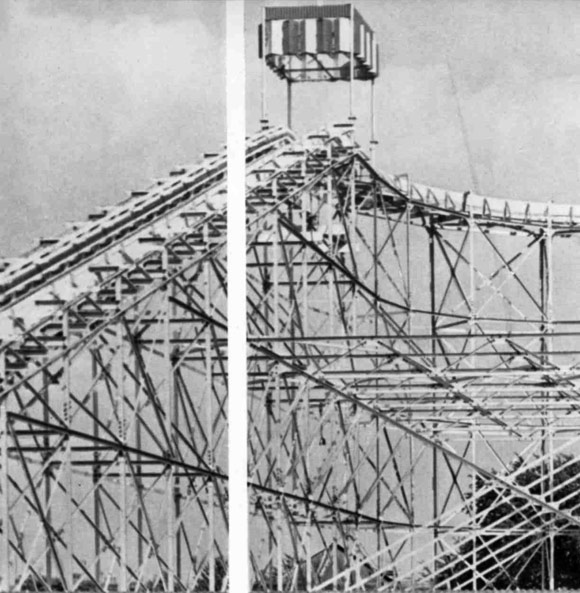 A landmark familiar to several generations of visitors seeking pleasure at the famous Kursaal Amusement Park, Southend-on-Sea, was the huge water chute which dominated the surrounding buldings and stall. This structure has now beeen replaced by a new water chute of equally preposessing dimensions and which comes into service when the Kursaal re-opens for the 1965 season.

The previous water chute – of steel construction – was originally erected at the White City Exhibition at Shepherds Bush around 1905. In 1922 it was re-erected at the Kursaal and was in continuous operation until 1963. The lasting qualities of steelwork, even in a corrosive marine atmosphere, are well demonstrated by the fact that the structure was still in first class condition even after 60 years service. But the design had become obslete and uneconomical – the time taken by the cars to reach the top was unduly long, the turnaround procedures and the top at bottom were cumbersome and it required 20 attendants to ensure smooth operation. 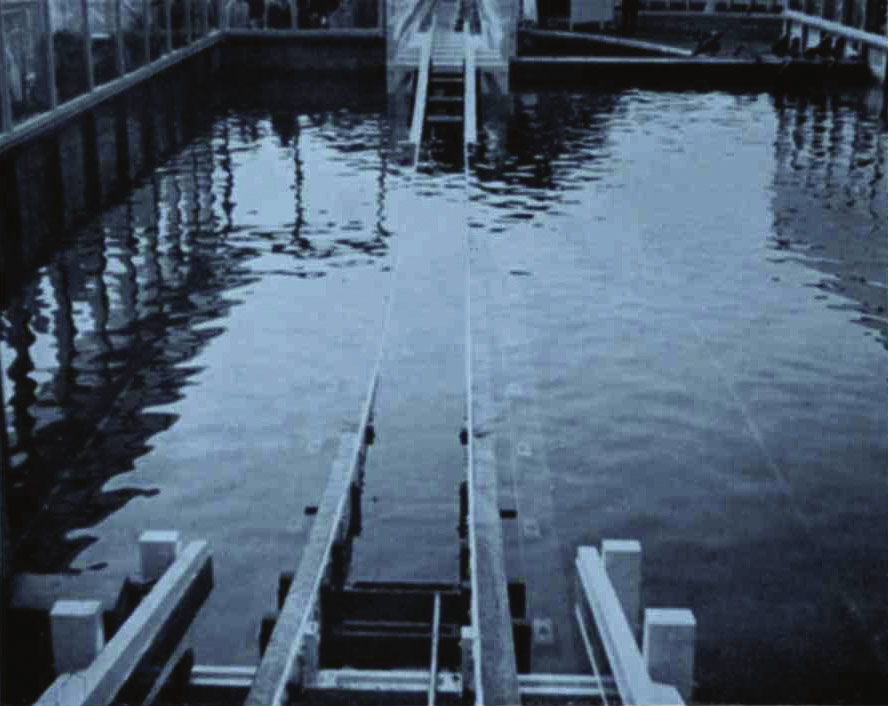 Other recent water chutes of this type have been erected in wood and the Kursaal authorities had to decide whether to build in this or another material. After careful research it was found that steel work would not only be more economical and easier and quicker to erect but, being galvanised, easier to maintain. Timber construction would have required expensive impregnated Canadian Pitch Pine to be imported because of the considerable lengths required. Also, because of the need for periodic repainting, maintenance would have been quite expensive.

The new water chute has six boats, each carrying six passengers and is operated by just five attendants. Each boat is pulled up the incline by a motor driven endless chain, and released at the top. Gravity does the rest – the boats travel around a slight incline on the banked top half circle, then plunge down a steep slope into the water 50 feet below with a tremendous splash. They then complete their journey around the lower half circle, coming to rest at the station under the control of a braking system comprising squeeze type angles.

As the boats travel around the circuit the structure is subjected to very severe shock loads and thus maximum strength and rigidity are essential requirements. The elevated portion comprises a series of braced towers of varying heights designed as cantilevers from the ground level bases to resist wind pressure: a system of inter-connecting cross braces ensures neccessary rigidity.