They’ve changed the density of concrete — or have they?

The bulk density of reinforced concrete has been increased. SCI’s Alastair Hughes explains how this affects the steel construction industry.

The density of concrete may seem rather an out-of-the-way subject to the readership of NSC, but it is one which matters to us. Most steel structures, composite or not, are burdened with concrete in one form or another. There is a move afoot to talk up the density (or, if preferred, unit weight) assumed for concrete in structural design. This asserts itself in Eurocode 1: Actions on structures, but it does not follow that a xenophobic and defensive response is in order. If we have been routinely underestimating the weight of concrete, at the expense of safety, we should be prepared to change our ways.

Since time immemorial, structural designers have, almost automatically, made the assumption that the density of reinforced concrete is 24 kN/m³, and before that the very similar 150 lbf/ft³. If pressed to justify this, we would acknowledge that the density of concrete does vary, but not all that much, and in many respects not controllably. It is therefore appropriate to adopt a nominal, not to say characteristic, value. Variation in density, like variation in cross-section dimensions, is one of the things the load factor is there to cover. In fact, a standardized density is the only realistic starting point for routine structural design. Bridge designers balancing cantilevers may have time and motive to grind finer but building designers, on the whole, do not.

Concrete is a mixture, and its density depends on its ingredients and their proportions. Density of regularly used aggregates can vary strikingly between, say, limestone and granite. Entrained air reduces density and free water in the pores increases it. But the most important variable is probably the reinforcement. Steel is about 3.25 times as dense as plain concrete, so if 1% by volume is rebar replacing concrete density increases 2.25%. While 1% by volume would be above average for typical mesh-reinforced composite slabs, it would be well below average for reinforced concrete superstructure generally. One of the arguments for an increase is that this average has been on a consistent upward trend since the days of 150 lbf/ft³.

Part of the water in concrete is permanent, either chemically combined in the cement paste or adsorbed. However a certain amount of free water is needed for fluidity at the time of placing, so it is always present even in the best designed mixes incorporating admixtures to reduce it, and the temptation to add excess of it on site (at the expense of the strength and durability of the end product) is not always resisted. So it is a rather uncertain quantity of this free water which evaporates from the concrete as it dries to a moisture content in equilibrium with the surrounding atmosphere, and the density of the concrete reduces in consequence (slight volumetric shrinkage notwithstanding). The advice of EN1991-1-1 is that the density difference between unhardened (meaning ‘wet’) concrete and the ‘dry’ density of the same concrete months later should be taken as 1 kN/m³. A vision of over a centimetre depth of captured and condensed water is one to contemplate if pressured to lay an impermeable finish on a newly cast composite slab.

This extra 1 kN/m³ represents another, separate, challenge to established practice, which has tended to assume half that difference, if anything. For the design of steel beams to support wet concrete, it is not good news.

EN1991-1-1 is subtitled ‘General actions – densities, self-weight, imposed loads for buildings’. Section 4, ‘Densities of construction and stored materials’ is very short, but a Note points users towards informative Annex A, a set of tables at the back. Section 4 includes the statement that ‘Mean values should be used as characteristic values’. In other words no attempt to target a 95% probability of non-exceedance, though exception is made for materials with a ‘significant scatter’ of densities. The use of mean values is in line with predecessor codes. Section 4 also states that ‘If a reliable direct assessment of the densities is carried out, then these values may be used’ – in lieu of those in Annex A, we may imply.

Annex A includes Table A.1 for concrete and mortar. For ‘normal weight’ concrete, neither lightweight nor heavyweight, it quotes a density of 24 kN/m³. This is for plain (unreinforced) dry concrete; footnotes instruct: ‘Increase by 1 kN/m³ for normal percentage of reinforcing and pre-stressing steel’ and ditto for unhardened concrete. (The table also features ‘density classes’ of lightweight concrete, but since these cover the entire spectrum of density it is hard to see the point.)

For normal dense concrete, the message is clear. Break the habit of a lifetime and use 25 kN/m³ instead of 24 kN/m³ for routine concrete design. Add 1 kN/m³ for design at the wet concrete stage.

This is advice, not command. It is contained in an ‘informative’ annex, not a ‘normative’ one, so users are not compelled to take the advice (though contrary designers should perhaps anticipate the question ‘where is your reliable direct assessment?’).

Informative annexes are subject to national decision on their status. The UK National Annex decides that Annex A ‘may’ be used, which seems deliberately lukewarm next to the decision that Annex B (concerned with vehicle barriers) ‘should’ be used. One day there is a thesis to be written on Eurocode semantics, but in the meantime we have buildings to design.

What are we to make of it all?

The concrete sector has already decided. To quote from the admirable booklet entitled ‘Getting started’ published by our counterpart, The Concrete Centre, ‘The key change to current practice is that the bulk density of reinforced concrete has been increased to 25 kN/m³.’ No equivocation there!

Of course the concrete doesn’t read ‘Getting started’ and (like some of us) has no Code change on its radar. If we have been underestimating its density all these years, the inescapable conclusion is that we should correct ourselves, not just in design to the new codes but in design to the old ones. We should thank EN1991-1-1 for bringing the matter to our attention, but the overdue correction is independent of the code change. The starting point for design to current UK codes is meant to be the mean density of the material – exactly as in the Eurocode.

That said, there remains a suspicion that the ‘density change’ owes something to cold feet. The reduction in dead load factor from 1.4 in current codes not just to 1.35 but to as little as 1.25 in EN1990 is favourable to the competitive position of concrete, but leaves responsible people conscious that a sizeable portion of the margin between action effect and resistance has vanished. Increasing the density of concrete redresses the balance a little, and may have helped make the calibrations used in support of the 1.25 factor more persuasive.

A blow to the steel sector?

For wet concrete, this 1.25 factor is not on offer. This is because EN1991-1-6, the Part concerned with actions during execution, reclassifies wet concrete as variable load, to be factored 1.5. So the increase in density is compounded by an increase in load factor, and a 40% real terms increase in the constructional live load for a beam from 0.5 kPa (factored 1.6) to 0.75 kPa (factored 1.5) completes the triple whammy for a typical composite beam at the wet concrete stage. This is probably an unforeseen consequence rather than a conspiracy. Calibration concerns must have been focused elsewhere.

SCI has reviewed the combined effect of the Eurocode provisions on the competitive position of composite construction. To an extent the negatives dwelt on in this article are countered by the reduced partial factors and other positive features of the new codes, and of course the wet concrete stage is only one of several which can control member sizing. 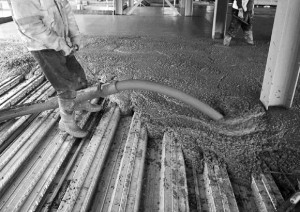 The density of reinforced concrete has been increased to 25kN/m³

Our conclusion is that the increase in the density of concrete to 25 kN/m³ should be implemented, partly because whatever the rights and wrongs of the situation it would be ridiculous to expect designers in practice to switch from one density to another just because there is a change in the material supplying the resistance.  Responsible designers, who recognize that this is correcting a historic wrong, may choose to adopt 25 kN/m³ in their remaining future designs to UK standards.

However 26 kN/m³ for wet reinforced concrete in typical composite slabs is excessive and unreasonable, if only because the reinforcement content is below average. A design wet density of 25.5 kN/m³ (of which 0.5, for reinforcement, could be factored 1.35 along with the decking) seems ample, and will be used in future SCI design examples for the wet concrete stage using normal dense concrete. For the final stage, 25 kN/m³ will be used, a little generously perhaps, for the reason stated above.

SCI also endorses the use of the higher (variable) load factor for wet concrete. This is clearly the intent of EN1991-1-6, even if some ambiguity remains.

For lightweight concrete with 14 mm Lytag coarse aggregate and conventional fine aggregate (sand), SCI design examples will assume a wet density of 19.5 kN/m³ (of which 0.5 is reinforcement allowance) and a dry density of 18.5 kN/m³. These are in the middle of the range quoted by the aggregate supplier.